Paris, France, Apr 15, 2019 / 11:33 am (CNA).- The Cathedral Notre-Dame is on fire, according to the Paris fire department. Multiple eyewitnesses shared photos and videos of the cathedral with visible plumes of smoke and flames across the cathedral’s roof.

The entire cathedral roof appears to have collapsed, while the fire continues to burn within the main structure.

Current efforts are focused on the main bell tower, with Paris’ chief firefighter highlighting the risk to what remains of the structure if the main bell should fall through the tower.

Archbishop Michel Aupetit of Paris said that “firefighters are still fighting to save the towers of Notre-Dame de Paris. The frame, the roof and the boom are consumed.”

“Pray,” the archbishop told the priests of Paris, he also invited them to ring church bells as a public invitation to prayer.

Unconfirmed reports indicate that the major religious and artistic treasures of the cathedral were removed as the fire began, including a relic of the crown of thorns.

Initial reports indicated that burning debris from the fire was falling in the immediate vicinity of the cathedral, but local media are now describing the fire as contained with in the cathedral building itself.

No announcement has yet been made concerning any injuries or fatalities resulting from the fire.

Paris mayor Anne Hidalgo issued a series of brief statements via Twitter saying that emergency respondors are fighting to control the flames and appealing to local residents to keep the area clear to assist their efforts.

“There is no word strong enough to express my sorrow,” Hidalgo said.

Officials have not yet determined what caused the fire, which is still burning. Both the fire department and the office of the public prosecuter  in Paris have confirmed that investigations into the origin and cause of the fire have been opened.

Built between the twelfth through fourteenth centuries, the landmark cathedral in the French capital is one of the most recognizable churches in the world, receiving more than 12 million visitors each year.

The fire comes after several weeks of vandalism and arson attacks on church buildings across France.

French President Emmanuel Macron released a statement on Twitter expressing the “emotion” of “the whole nation.”

Macron said his thoughts were with all Catholics and French citizens.

“Like all our compatriots, tonight I am sad to see a part of [all of] us burn.”

Marcon arrived at the scene of the fire at 9:20 pm.

Cardinal Daniel DiNardo, president of the U.S. bishops’ conference released a statement on behalf of the American hierarchy calling the fire “horrific.”

“This particular cathedral is not only a majestic Church, it is also a world treasure. Noble in architecture and art, it has long been a symbol of the transcendent human spirit as well as our longing for God,” DiNardo said.

“Our hearts go out to the archbishop and the people of Paris, and we pray for all the people of France, entrusting all to the prayers and intercession of the Mother of God, especially the firefighters battling the fire.”

This is a developing story and will be updated when information becomes available.

Celebrating our New Permanent Deacons to be Ordained April 27

Pope urges students to fight their addiction to phones

One year after the fire, a French priest’s tribute to Notre-Dame 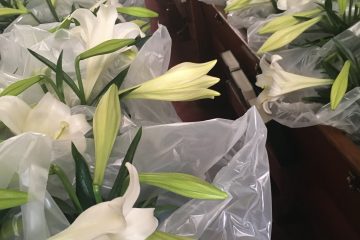