Thirteen incarcerated women and men experienced the sense of hope and promise of new life that accompanies this season when they were welcomed into the Catholic Church during Easter Masses at three area prisons.

“It was a great weekend, so glorious,” Marallen said. “Everyone has been working diligently and faithfully preparing for this.”

The seven men at LeCI who received the sacraments of initiation at Mass on March 31 were each inspired to embrace the Catholic faith and strengthen their relationship with God for deeply personal reasons. Ronald Moore, who has attended a variety of church services during his time at LeCI, said it was the “different approach of teaching and preaching” that “caught my attention about Catholicism.”

“I like the fact that it’s a universal faith and the emphasis on the unity of all God’s people,” he said.

“My life used to be full of empty prayers and superficial love,“ Moore added. “I didn’t really understand before what Jesus went through for us. Now that I do, I want to have that same love for other people. I’ve developed a better relationship with Jesus. Now that I have that relationship, I want to keep it, strengthen it and share it with others.”

A friend, who is also incarcerated at LeCI, introduced John Self to Catholicism, giving him reading materials and encouraging him to come to instruction. As he learned more, Self said, “I realized I want this. I can’t live without it. I don’t want to live my life any other way.”

As he was growing up, Self admits that he pushed away any thoughts of religion or a relationship with God. “I took up a life of crime, but God has shown me that I don’t want to live like that anymore,” he said. “He brought me here for a reason — to open my life to better things. God wants to give me a life full of happiness and His love. There’s nothing in the world greater than that.”

Father Tom McQuillen, dean of men and a philosophy instructor at Mount St. Mary’s Seminary, played an active in preparing the men to join the church. “In working with the incarcerated men, what I find most inspiring is the determination to change,” he said. “Some of them are trying very hard to turn their lives around — often against great odds. The background of many of them includes abuse, neglect, poverty and addiction. Support networks of family and friends, in many cases, are absent — at least in a way which would help the men out of their situation. It is an honor to accompany someone who enters this struggle to do better, to answer God’s call and to amend their lives.”

The April 2 Easter Mass at DCI marked the first time any of the women have entered the church since the archdiocese prison ministry began structured work there in 2013. During his homily, Bishop Binzer shared his hope that the women would continue to celebrate the “love that Jesus has for us every day. One prayer that God is guaranteed to answer is that we will fall in love with Jesus Christ more closely each day,” he said, assuring them that “I’ll be lifting you up in prayer.”

It was the example of her brother Phillip Smith, currently incarcerated at LeCI, that inspired Lee Anna Rayas to become Catholic. Smith was received into the church in 2015. “At one time, he was getting in trouble a lot, but I’ve seen him change. He became a better person and became closer to God. I realized if he could change, I could change,” she said.
Smith’s words for his sister, whom he corresponds with monthly by letter, brought Rayas to tears: “I love you and I’m proud of you.”

Rayas said a telling moment for her during the RCIA process was watching “The Passion of the Christ.” “Watching what He went through for me changed everything. I’ve messed up, made mistakes. I’ve sinned, but God has forgiven me. Now I’m able to forgive other people.”

“I’m feeling full of happiness, peaceful and content,” said Erin Ratleff immediately following the Mass. She was baptized in the Catholic Church as an infant and made her first Communion as a child, but was never confirmed. Now, she said, “I feel blessed and I feel whole.”

A friend convinced her to take the necessary steps to come into full communion with the Catholic Church. “After attending group, reading Scripture and going to Mass, I realized it was time to turn my life over to God,” said Ratleff.

“It’s been an amazing journey,” said Amie King. “I feel at peace. I feel love and acceptance. I feel home.”

The path to becoming Catholic has changed her, added King. “I’ve gone from a lost and broken little girl to a bright, caring woman who feels complete. I know that God will always be at my side. As long as I look toward Him, I’ll succeed in whatever I need to do. I hope to bring other woman to God.”

Members of the Children of Mary, Sisters Agnes Immaculae and Faustina Maria, were among the volunteers who accompanied the women on their journey of faith. “It’s been amazing working with the women and seeing their growth as they have developed daily prayer lives and greater understandings of the truths of the faith,” Sister Agnes Immaculae said. “They have shared with us occasions of overcoming self to show love of neighbor, which is heroic considering the hostile environment they live in. It’s clear the more that they understand truth and develop a personal relationship with Jesus and His Mother, the more they desire to live virtuous lives.”

“We hope and pray that our Lord will continue to draw more and more souls to himself at DCI, forming a deeply catholic community within the prison walls… giving the women a sense of mission, which is very real and necessary: to evangelize the other women who are in desperate need of Christ.” 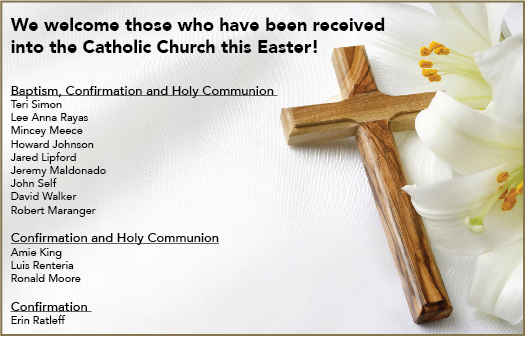