On Aug. 15, the Feast of the Assumption of Mary, they have planned what they jokingly call “round two.”

When Dylan and Clair Hesson of Versailles began planning their May 2020 wedding in Oct. 2019, they knew they might encounter a few small challenges along the way, but they never envisioned they would be thrust in the middle of a global pandemic and stay-at-home order.

Clair is the daughter of Brenda and Doug Schmitmeyer, who hosted nearly 400 people on their family farm in July 2019 for the northern archdiocesan Rural Farm Mass. While the annual event always draws a large crowd, it pales in comparison to a rural, country wedding.

“We had our wedding caterer plan for 450 people for supper” recalled Clair, “but luckily we hadn’t sent out our invitations before everything was shut down.”

Their original plan was to be married in Newport at Sts. Peter and Paul Church by Clair’s great uncle, Father Jim Schmitmeyer. He was previously a priest in Darke County, but now serves at St. John the Evangelist in Borger, TX. As things began to change rapidly during the statewide lockdown, they eventually realized that Father Jim would not be able to travel to Ohio on May 9.

“We were originally told that the stay at home order would expire on May 1, so we remained hopefully that we could still get married on the ninth” said Dylan, “but as we were communicating with the caterer and florists, we were learning that many people were canceling.”

Through many positive conversations with Father Steven Shoup, the couple decided to proceed with their original date, no matter what the ceremony would look like.

“Once we made the decision to move forward, it really became much easier on everyone. We knew we could only have 10 people in the church, so that meant the exchanging of vows could only be witnessed by our parents, the Maid of Honor (Clair’s sister) and Best Man
(Dylan’s brother). The biggest challenge was keeping our grandparents from sneaking in the church,” mused Clair.

The vow ceremony, officiated by Father Shoup, was special and short – with no music, readings or communion. Despite the simplicity of the ceremony, the rural reception that waited outside the church helped make the day exciting. Nearly 100 friends and family gathered on the church lawn and in the parking lot to congratulate the newlyweds. “That was really cool to see so many people come out and support us after all we’ve been through. It really shows you how much people care,” said Dylan.

Afterwards the family and a few close friends gathered at the home of Doug and Sherry Hesson, Dylan’s parents, for a private, mini reception.

On Aug. 15, the Feast of the Assumption of Mary, they have planned what they jokingly call “round two.” Father Jim Schmitmeyer will be finally travel to Ohio to celebrate a unique “wedding” Mass. Clair will walk down the aisle again, this time, hopefully, with music and pews full of family and friends. Dylan will once again meet her at the altar, but this time there will be no exchanging of vows. Instead, they will receive a special blessing and the readings will reflect the solemnity of the feast day. Following the Mass, those 450 guests will, hopefully, celebrate with the newlyweds.

Dylan and Clair are a testament to the true nature of a marital partnership. They relied on their faith, family and each other to carry them through difficult times. As they finalize details for Aug. 15, they continue to keep things in perspective and light-hearted, “We like to joke around and say ‘the next time we get married’ it will go much smoother.”

Why Love Is More than a Feeling 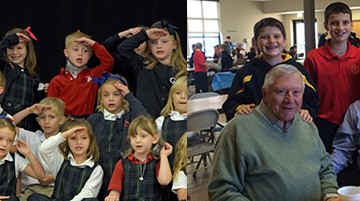