Because of well-publicized, persistent instances of racial discrimination, the summer of 2020 has seen a rise in race-consciousness across the political, ideological and religious spectrum. And it is correct to note that racism in American society is, in some sense, systemic. Despite authentic legal, political and social progress, racism can be found in systems of American public life, at the very least as a residue of past institutional injustices.

But without denying systemic elements or the need to address them through legal and political measures, recourse to the language of systemic racism should not shield us from our individual moral responsibility to address racism in our hearts and communities. Rhetoric about systemic racism is often not helpful, either, in thinking about problems of racial prejudice, or about solutions. Speaking solely – or perhaps even primarily – in terms of systemic racism may actually deflect from real solutions. If racism is reduced to a “systemic” problem, from one point of view everyone is at fault; from another, no one is. Both these attitudes are resistant to actual reform.

A CHANGE IN VIEW

I suggest some alternative ways to think about race that might be more hopeful of authentic solutions.

First, the more urgent matter is for each of us to confront our own impulse to fear and suspect the “other,” regardless of the ethnic, racial or demographic characteristics that define that other. A significant part of the problem for Catholic Christians is that we are more likely to use language of American politics to frame moral issues, than we are to use the language of Catholic faith. Our default moral language is usually that of individual rights and liberties, which is neither native to Catholic moral thought, nor conducive to fruitful moral development. A language of individual rights is corrosive of authentic community. It atomizes us, and it undermines the fundamental truth that being made in the image of God has no reference to race or ethnicity.

This is in contrast to a more hopeful and authentically Catholic moral language of dignity and solidarity. As Catholic Christians, we affirm the fundamental truth that all human beings share a common inviolable dignity, and that we are bonded together through the natural solidarity of a single human nature. This is a dignity and nature that does not recognize race, ethnicity, class or any other demographic, rooted in our common destiny of people created by, and ordered toward, love of God. For humans created in the image of God, there is no “other.”

Second, we must resist the impulse of being formed by partisan identification or political commitments. Many of our moral conclusions are measured more by allegiance to political ideology or party than they are by Catholic moral theology. We must not allow these political commitments to over determine our attitudes about racial injustice and other prejudices. More broadly speaking, we must resist rigid commitment to political parties, especially in terms of moral issues that defy political identification. Racism is not a liberal or conservative issue. It is a human issue that must be addressed in moral terms that shun political ideology.

Third, we must resist the impulse to eschew concern about racial discrimination, preferences and privilege merely because those with hostile ideological commitments or agendas also take those positions. Nor should the coincidental agreement on some policy decisions cause one to abandon those positions, just because they are held by people with whom we have good faith disputes on other issues. And we should not be deterred in our own concern about racism by those who advance agendas that are otherwise disagreeable, or even violent.

Fourth, we must acknowledge residual advantages and disadvantages caused by racist political, legal and social legacies. The question should not be whether these relative advantages exist, but how to address them. We are not morally culpable for privilege that is the effect of historical or social contingencies that we did not choose, but that does not excuse us from our responsibility to acknowledge, account for and address the advantages that come from it. Christian moral agency, rooted in justice and charity, is about claiming those contingencies, regardless of “fault.”

Fifth, we must resist the presumption to speak for people of color or anyone else who is a victim of racism or other unjust prejudice. Yes, we must, to the extent possible, try to be empathetic. We must try to put ourselves in the position of those who are on the wrong side of the advantage/disadvantage ledger. But to presume to be able to speak on their behalf is both arrogant and patronizing. It aggravates the problem rather than alleviates it. We must listen, learn, adapt and redress. But we cannot understand, nor articulate the pain of race-based insults and indignities that are a part of the daily lives of people of color. We must allow their voices to be their voices.

Finally, we must confront our own racist impulses and our own enabling of racist attitudes. In his jarring song, “White Man’s World,” Jason Isbell courageously writes, “I’m a white man looking in a black man’s eyes / Wishing I’d never been one of the guys / Who pretended not to hear another white man’s joke / Oh, the times ain’t forgotten.” But, in a note of hope, he also calls us to look forward: “You’re still breathing, it’s not too late / We’re all carrying one big burden, sharing one fate.” Racism is not someone else’s burden. There is no “someone else.” 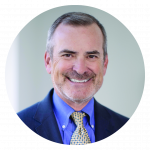 This article appeared in the August 2020 issue of The Catholic Telegraph Magazine. For your complimentary subscription, click here.