‘A high place in heaven’

DAYTON DEANERY – After 30 years in ministry Deacon Henry Beck has never forgotten why he entered the diaconate in the first place: to help people.

Now 93 and slowed by age and illness, Deacon Beck still cares about the parishioners at Our Lady of the Rosary Parish in Dayton. He prays for them and welcomes their visits at Mass each Saturday evening.

A widower and nearing retirement from the Montgomery County treasurer and auditor offices, Deacon Beck wanted to work more closely with the parishioners at Our Lady of the Rosary. He began studies at Mount Saint Mary’s Seminary of the West and was ordained a permanent deacon in 1979, a member of the second diaconate class of the Archdiocese of Cincinnati.

“I wanted to become more involved with the parish, with the people,” he said. “It ended up I was doing almost anything that came along.”

“I zeroed in on the Gospels,” he said, adding that he wanted to share the Lord’s word with the people.

He also shared his compassion for parishioners outside of church.

“Sometimes they would have problems we would talk about,” he said. “If they had problems, by speaking of them to me they were getting them out.”

His years as a deacon helped him become stronger in his own faith.  Deacon Beck’s mother died in the 1918 flu epidemic when he was two. Her nine children, then ages 2-12, were raised at St. Joseph Orphanage until the older girls were able to bring them back home. Four of the five girls grew up to become women religious. Deacon Beck’s own son, Henry, Jr., is a Franciscan priest in campus ministry at University of Texas El Paso in Texas.

Deacon Beck graduated from Holy Trinity School in Dayton and St. Frances High School Seminary. He attended the St. Anthony Friary in Cincinnati for a year.

He has been a member of OLR for decades and was assigned there as a deacon after ordination. He also served at St. Stephen, St. Adalbert and Holy Cross parishes. The parishes celebrated his 30th anniversary as a deacon with a party on July 18. A week later, the members of his ordination class held a reunion at OLR.

Rose Ballman, an OLR parishioner who has known Deacon Beck for 55 years, said he put aside his own illnesses in recent years to focus on others.

“He’s a very a good spiritual advisor,” she said. “I’ve asked him for prayers for different occasions and he has uplifted my spirits as well as my husband’s,” she said. “He’s just such a caring man and I’m sure the good Lord is going to have a high place in heaven for him when he dies.”

Sunday Scripture: Faith and its rewards

‘A high place in heaven’ 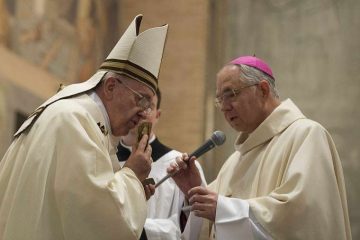