An arrest has been made in connection with the arson and vandalism of both a Catholic church and a Methodist church in Bethesda, Maryland, that occurred on July 9 and July 10.

Peter Piringer, a spokesman for the Montgomery County fire department, said that charges have been filed against a juvenile and will be handled in juvenile court, the Washington Post reported.

Father Samuel Giese, pastor of St. Jane Frances de Chantal Catholic Church, told his parishioners the day after the vandalism at Sunday Mass, that he believed the attack was aimed at the church because of its pro-life views.

The attack on the Bethesda parish is one of dozens of acts of vandalism and arson that have targeted Catholic churches and pro-life pregnancy centers across the nation in recent months since reports began circling that Roe v. Wade would be struck down by the Supreme Court — which happened June 24. That ruling delegated authority to the states to regulate abortion.

Some arrests have been made in connection with the vandalism. Here’s what we know so far:

After the June 7 fire, the center posted photos on its Facebook page showing the building’s windows shattered, an office burned and heavily damaged, and the words “Jane was here” spray-painted on the side of the building.

Shortly after the attack, police arrived at the scene and arrested Maeve J. Nota who had left church grounds and was identified by a church staff member, a police report shows. Nota was charged with a hate crime and malicious mischief, according to the report.

The State Police say they arrested and charged a juvenile and 18-year-old Braxton Allan Miller of Charleston with arson and conspiracy, WRRF.com reported. The third perpetrator, 19-year-old James Dean Elmore of Beckley, was charged with accessory after the fact and conspiracy, the outlet reported. It’s unclear what their motives were.

Photos from the attack show graffiti spelling out the words “Janes revenge,” “Jane was here” “Abortion 4 all,” “Your time is up,” “We’re coming for you,” “We are everywhere,” some flowers, and anarchist symbols. The vandals also painted over security cameras and the clinic’s sign. The graffiti was cleaned by volunteers and the sign was replaced by a generous donor, Director Flanagan said Wednesday.

One of the church’s signs was spray-painted with graffiti that said “defenestrate babies” and “Hail” with a star next to it, according to the outlet.

Ajayi told CNA the man was homeless and was saying that Catholics should not worship idols as he toppled a statue of the Blessed Virgin Mary and an angel. Ajayi and other members from the church prayed a rosary around the desecrated space and prayed for the man, he said.

Police told CNA Wednesday the man arrested is Matthew Seis and is in his mid-40s. He is being charged with a felony of malicious mischief, police said.

Vatican warning: Germany's ‘Synodal Way’ poses ‘threat to the unity of the Church’

After another major hurricane, Central America needs ‘a helping hand’ 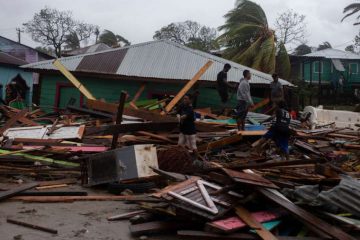