A former lawyer who left his profession to become a Capuchin Franciscan priest, Saint Fidelis of Sigmaringen has his liturgical memorial on April 24.

Fidelis’ life bridged the sixteenth and seventeenth centuries, a time of religious conflict in Western Europe. He died at the hands of a mob while preaching in Switzerland, where he had gone to combat the Calvinist heresy.

The future “Fidelis” received the name of Mark Rey at the time of his birth, during 1577 in present-day Germany. Mark studied at the University of Freiburg, and worked for a time as a private tutor. Eventually he went back to the university and earned his law degree around 1611.

Though he had already shown signs of devotion to God and studied canon law alongside civil law, Mark opted for a secular career as an attorney. Within a year he was known as “the poor man’s lawyer” because of his concern for the needy. Just as quickly, he became disgusted with the corrupt ways of his chosen field .

Leaving his legal practice behind, Mark decided to give his life directly to the service of Christ and the Church. In short order he received ordination as a priest, and joined the Capuchin Franciscans in Freiburg.

With his entry into the order he received the name “Fidelis,” meaning “faithful” — after the words of Jesus Christ in the Book of Revelation, “Remain faithful until death, and I will give you the crown of life.” As he embraced radical poverty and simplicity, the attorney-turned-Franciscan left his inheritance to a scholarship fund for poor seminarians, who also received his books.

Fidelis showed his love for God through prayer and fasting, while caring for his neighbors through preaching, writing, and the celebration of the sacraments. He showed particular care for the poor and sick, and was especially revered for his work among Austrian soldiers who were suffering from a plague epidemic.

During 1614 a Swiss Catholic bishop had sought help from the Capuchins, to restore the faith and counteract the spread of Calvinist Protestantism. In 1621, Fidelis was sent on the mission. He brought just four items: a Bible, a prayer book, a crucifix and a copy of the Capuchin rule.

The winter of 1621-22 was a busy period of preaching, instruction and theological disputation for the Franciscan priest. He preached not only in the pulpits of Catholic churches, but also in public places, and even in the meeting-places of the Calvinists themselves. Some Swiss Protestants responded with hostility, but many others were also brought back to the Church.

Like many cases of religious persecution during this time, Fidelis’ treatment at the hands of the Calvinists did not stem exclusively from doctrinal disagreement. National and cultural tensions also contributed, with many Swiss Protestants suspecting that the Catholic mission was part of an Austrian plot against their nation.

This volatile situation boiled over on April 24, 1622, when Fidelis’ preaching provoked a riot at a church in the village of Seewis. Some Austrian soldiers were killed in the uproar, and a would-be assassin shot at the priest.

After declining an offer of help from a Protestant, Fidelis was confronted outside the church by a mob, and told to choose between his Catholic beliefs and his life. Fidelis was defiant: “The Catholic religion is the faith of all ages. I fear not death.”

St. Fidelis was beaten and stabbed to death. The sight of his martyrdom, however, is said to have converted one of the Protestant preachers who led the mob. A succession of attested miracles led to his canonization in 1746. 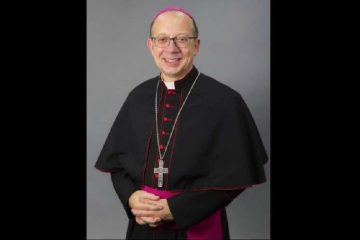