Denver, Colo., Apr 5, 2020 / 12:35 pm (CNA).- Archbishop Fulton Sheen’s niece has recounted her view of the famous Catholic television personality and author in a new book that aims to show his Christian devotion and his deep concern for the poor, even as he engaged with Hollywood celebrities, American leaders, and an audience of millions.

“I hope that you learn he was not just the man in the red robe on TV. He was a very humble man, and very religious,” Joan Sheen Cunningham, co-author of the book “My Uncle Fulton Sheen,” told CNA March 31. “His whole life was working for the Church. That was the most important thing about him. I certainly think he did his job well!”

Sheen was the oldest of four brothers. Cunningham was the eldest daughter of Sheen’s brother, a lawyer and father of eight, who was the second oldest to Sheen.

At the suggestion of Sheen, Cunningham left Illinois at a young age to enroll in a private school in New York City, where she lived with friends of Sheen.

This allowed her to take part in weekend outings with her uncle for Mass, confession, and dinners with Hollywood stars and influential politicians.

Venerable Fulton Sheen was born in 1895 in Illinois and was ordained a priest of the Diocese of Peoria at the age of 24. He was appointed auxiliary bishop of New York in 1951, and remained there until he was named Bishop of Rochester in 1966. After he retired in 1969 at the age of 74, he was named titular Archbishop of Newport, Wales. He died at the age of 84, and was declared venerable by Pope Benedict XVI in 2012.

Cunningham’s book puts Sheen’s life in a new perspective. She recounts his family’s devout Catholicism, his excellent academics and talent for public speaking, but also his deep distaste for farm life. He showed great fondness for France and the French language, but was sometimes hospitalized due to overwork.

The clergyman showed a great love for Christmas and for dogs. He famously clashed with the deeply powerful Cardinal Francis Spellman of New York.

Sheen is perhaps most famous for his roles as host of the “Catholic Hour” radio show, which he started in 1930, and the television shows “Life is Worth Living” and “The Fulton Sheen Program,” which ran in the 1950s and 1960s, respectively. For a time, his television show was among the most popular on the airwaves.

Cunningham reflected on his influence.

Cunningham couldn’t think of anyone with as much influence as Sheen, saying this was because “he appealed to all kinds of people.”

Sheen authored many books explaining Christianity and discussing Christian devotion. Proceeds from the book sales supported foreign missions. He headed the Society for the Propagation of the Faith for years.

Cunningham said this position was his favorite role. He proved to be capable at raising awareness of the Catholic missions in other countries and in fundraising for them. He would visit the missions in Africa and other parts of the world.

Sheen was also a man of deep Christian devotion.

“I think he prayed every day that he’d do whatever God wanted him to do,” she said.

His life showed a strong devotion to the Virgin Mary and he would speak of her in many of his sermons. He helped popularize the Mary Dixon Thayer poem “Lovely Lady Dressed in Blue.”

“I don’t know how many statutes of the Blessed Mother I have, because every time he would see one he’d have to buy it,” Cunningham told CNA. “His chapel in his apartment was all done in blue for the Blessed Mother.”

He went to confession weekly, engaged in frequent self-examination, and often prayed before the Blessed Sacrament.

She also recalled his kindness, sympathy, and his ability to listen and to understand people’s difficulties.

“We would walk down the street in New York and there would be someone there begging. He couldn’t help but stop and talk to them and give them some money,” Cunningham said. “That was his way. He felt very badly to see so many poor people. He tried to tell people they should have a little sympathy for them and help them out.”

Being in such close contact with her uncle taught her “great faith,” she said.

“I certainly learned not to judge people by their religion or their race or anything like that. He was very open. He taught me that it doesn’t matter if someone is important or just a regular person. You should treat them all the same.”

“That I remember very well, growing up. I would meet people and he would never tell me if they were very important. I just had to be gracious and talk to them like anyone else. Then later I would find out they were somebody,” she said.

Another communist, Louis Budenz, personally attacked Sheen in his paper, and Sheen replied in a pamphlet. A personal encounter with Sheen deeply affected Budenz, Cunningham said, and seven years later he converted.

Cunningham’s account tells of going with her uncle to see the movie “Snow White,” to visit the ice skating rink, and to taste sweets at cafes. She recounts her memories of his vocation story, and how he integrated his work as a broadcaster, professor and author with his priesthood.

“He had a wonderful, wonderful sense of humor. He was very kind and thoughtful about everything,” she said. “I had an awful lot of fun with him, to be sure, from the time I was young to the time I had children. He was always fun.”

In some ways, Sheen was like a second father to Cunningham. He showed an ability to understand her and help her talk over questions and quandaries, even from a young age.

“if you had a quandary, he could help you find an answer to it,” she said. “He was understanding, and I think he wanted everyone to have a great faith in God and rely on God. He led me down the right path, when I would wonder about school, and of course my faith.”

His engagement with people on the street, whether admirers, critics, self-proclaimed relatives, or fallen away Catholics, also touched Cunningham. Sheen was not universally popular. Sometimes he was the subject of an angry confrontation on the street.

“He would just pretend that they were being nice to him. He would overlook it,” Cunningham said. “He always hoped that they would change their mind about it. A lot of people didn’t like him, I’m sure, because of what he was teaching.”

For Cunningham, more Catholics need to continue his legacy.

“It’s too bad there aren’t more people like him to carry on in the Church like he did. I think the world needs somebody like that,” said Cunningham. “If there were more people who would approach others like he did, maybe things could be turned around.”

She suspected her uncle would have this advice: “Pray to God to turn the world around. My uncle would say ‘just pray pray pray’.”

Cunningham recounts her family life and her marriage to a Georgetown Law student. Sheen gave them a copy of his book on marriage, “Three To Get Married” and helped the newlyweds find and set up their new apartment—drawing on his clergy friends to help furnish the place.

“This book should be essential reading for anyone interested in the life and heroic Christian witness of Fulton Sheen,” Jenky said in a foreword to the book. “Reading Joan’s fascinating account of her beloved uncle’s story gives a richly human context to the inspiring life of this good, gifted and holy man.”

The Peoria diocese opened the cause for Sheen’s canonization in 2002, after the Archdiocese of New York said it would not explore the case. Jenky had suspended the beatification cause in September 2014 on the grounds that the Holy See expected Sheen’s remains to be in the Peoria diocese. A lengthy legal battle followed, in which Cunningham sided with Peoria and Bishop Jenky due to the work they had put into the cause of beatification.

His beatification had been scheduled for Dec. 21, 2019, but it was postponed only weeks prior at the request of Bishop Salvatore Matano of Rochester, N.Y. The bishop was concerned that Sheen could be cited in investigations into handling of sexually abusive priests and alleged cover-ups during his three years as head of the diocese. Catholic News Agency reported in December that the concern focused on Sheen’s handling of a priest who allegedly committed abuse or misconduct with adults in West Virginia, then returned to New York.

Cunningham hoped the conflict with the New York archdiocese could fade with time. She voiced disappointment with the last-minute cancellation and voiced sympathy with Sheen admirers who lost money on hotel and plane reservations.

She also acknowledged she did not understand the concerns that halted the beatification..

“My uncle had been investigated many times before Rome would even look at him as a possible candidate (for beatification),” said Cunningham.

Father Gene Contadino: A Legacy of Social Justice and Love for Christ 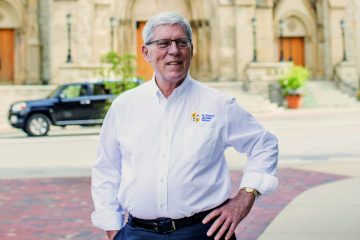