NEW ORLEANS — It has been more than 12 years since Blessed John Paul II promulgated Ex Corde Ecclesiae, an apostolic constitution that clarified the relationship between the diocesan bishop and the Catholic colleges and universities within his diocese.

While the 1990 document is known best for the Latin word mandatum, which required Catholics teaching theology at a Catholic college or university to seek a “mandate” to do so from the local bishop, New Orleans Archbishop Gregory M. Aymond told an audience at Loyola University New Orleans Sept. 20 that the document overwhelmingly affirmed the essential role of Catholic higher education as “a ministry of the church.”

“(John Paul II) makes it very clear that Catholic colleges and universities are indeed a ministry of the church, and they form, in many ways, the heart of the church,” Archbishop Aymond said in his talk, “Catholic Education: The Gifts and Challenges in 2012 and Beyond.”

In launching the Presidential Centennial Guest Series that celebrates the 100th anniversary of Loyola University New Orleans, Archbishop Aymond said the mandatum is rooted in Canon 812, which requires any Catholic who teaches theology in a Catholic institution to have a license or approval to teach from the competent ecclesiastical authority — the local bishop.

“What that really means is that the bishop sends forth that person and shares with him or her the ministry of teaching,” Archbishop Aymond said.

The document “invites bishops and theologians to dialogue,” he said, and offers the opportunity for theology professors “to make a commitment, either in writing or verbally, to always remain faithful to church teaching as a theologian of the church.”

Archbishop Aymond said it was “unfortunate” that so much attention has been given to the mandate while other elements of the document strongly supporting the role of Catholic higher education often have been overlooked.

He said Ex Corde Ecclesiae lauded Catholic colleges and universities as places where “the church does its thinking and research” and as institutions that respect academic freedom.

“Being the academician that he was, John Paul says knowledge in all areas should always lead us to faith questions, and a mature faith would hunger for more knowledge,” Archbishop Aymond said. “He says there must be a mutual dialogue between faith and reason.”

The archbishop, who was rector of Notre Dame Seminary in New Orleans for 14 years and served as chairman of the board of the National Catholic Educational Association, said Catholic education must do more than simply prepare students for a profession.

“The mission of the Catholic college or university … is for students to gain knowledge and become wise and learn how to become disciples of the Lord Jesus and to be prepared to enter a life whereby they can truly live out their vocation, their mission, and make moral and spiritual choices,” he said.

“In the mission statement, as well as in recruitment and advertisements, we should never be ashamed to say we are a Catholic institution and that we are connected to the mission and ministry of Christ through the Catholic Church,” he said.

— Faculty: Catholic institutions should help faculty members with convocations, days of prayer and continuing education to “grow personally in knowledge and in faith so that they can understand the Catholic charism of the university.”

— Course of studies: The goal of the curriculum “is not simply to have people graduate but to teach them how to live, teach them how to make important decisions,” he said. In theological education, Archbishop Aymond said Catholic colleges should require every student to take at least an introduction to philosophy and theology.

“Even if they don’t necessarily believe in what they are being taught, it’s an opportunity to be exposed to the Scriptures, spirituality and the teaching of our church,” he said.

He would rather see courses in theology begin with “a basic course in Christianity and in the very basic teachings of the church and in the scriptures” than a course on world religions.

“Many Catholic students, through no fault of their own, do not know what church teaching is,” he said. “Others may know church teaching and have been turned off by it or chosen to reject it. Theological education offers the opportunity to dialogue, ask questions, express doubts, disagreement and even rejection of church teaching — all of this in order to come to a better understanding of what those teachings might be.

“In a Catholic college or university, a student should not lose his or her faith but explore it and gain knowledge.”

— Care for students: “Our service to our students is to help them pause — to pause long enough during their years of study to know themselves better … to know that they can in some way grasp and experience God’s unconditional and personal love for them,” he said. 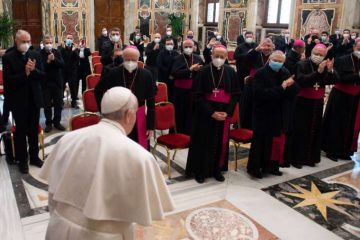