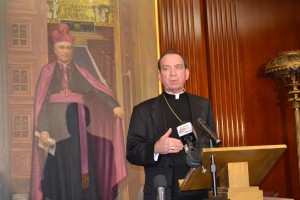 On Tuesday, April 1, all the member bishops of the U.S. Conference of Catholic Bishops’ Committee on Migration will journey to the U.S.-Mexico border in Nogales, Arizona to celebrate a very special Mass. The prayerful event will be on behalf of the nearly 6,000 migrants who have died in the U.S. desert since 1998, as they desperately risked their lives to support themselves and their families. The bishops will highlight the human suffering caused by our broken immigration system, which provides far too few paths for legal migration and drives so many to such dangerous journeys of survival. The trip follows the example of Pope Francis, who, in his first excursion outside of Rome last year, traveled to the Italian island of Lampedusa to remember African migrants who died attempting to reach Europe across the Mediterranean Sea. On this occasion, I wish to join publicly my prayers with my brother bishops on the border.

For years now, the Archdiocese of Cincinnati has advocated for the restoration of law, order and respect for human dignity to our immigration system. Our current policies fail both to regulate migrant flows for the good of our nation and to honor the God-given rights of those seeking a better life here. The harrowing evidence for this is in the estimated 12 million people living in the shadows without documentation, and the thousands of migrants dying on our nation’s doorstep because there is no legal way for them to otherwise get here. For the Archdiocese locally, the repercussions are seen in the breakup of too many good, immigrant families through deportations in our parishes, schools and agencies.

On the verge of this April 1st Mass, we find ourselves dealing with an Administration that says it stands with migrant families yet has deported more immigrants than any administration in U.S. history. And our Congress is sending the message that it is better to cast a “yea” vote for our current status quo of chaos and disorder, rather than to forge a compromise on any set of principals about how our nation’s immigration system should even function. In the end, the victims of such complacency are the thousands of men, women and children for whose departed souls we pray. But, even more broadly, all Americans are negatively impacted when their communities and local economies are forced to manage the fallout from a national immigration system still in disrepair.

I urge all people of faith and good will to remember our migrant brothers and sisters on the occasion of this Mass. I encourage us not to give up hope that we can help our national leaders restore law and order and courageously welcome those whom we have called strangers as our nation’s own.

Message from the Superintendent: Catholic Schools & What We Stand For