On Tuesday, Bishop Robert Barron, an auxiliary bishop of Los Angeles, issued a “pastoral cry of the heart” to encourage Catholics to stop tearing each other apart online and instead provide well structured and charitable arguments.

“I understand that people are passionate, especially about religious matters, but when it comes to this commentary we always must keep truth and love in the forefront,” he said.

Speaking of social media, Barron said that “I must admit the vitriol, negativity, personal attacks, and outright calumny that come regularly from self-professed Catholics is dismaying and disedifying in the extreme.”

The video message followed a June 24 article Barron had written, which he said the drew unhealthy criticism from mobs of Catholics who responded not with arguments, but with vicious insults. For four days, the bishop had to assign co-workers to assess and remove disturbing comments from his different social media pages, he said.

“In the wake of my article,” he said, “armies of commenters, encouraged by certain internet provocateurs, inundated my Twitter and all my social media sites with wave upon wave of the most hateful, vituperative, venomous words that you can imagine.”

“I was called spineless, gutless, cowardly, and that’s just to mention the most benign and unobscene remarks.”

In the article, “Why ‘what are the bishops doing about it?’ is the wrong question,” Barron noted Catholics had been calling for a greater contribution from the bishops against racial injustices, including the death of George Floyd.

He said bishops are lobbying politicians, encouraging legislative changes, and calling on community leaders. However, he said there must be footwork done by the laity as well.

“The crisis precipitated by the brutal killing of George Floyd is one that involves many dimensions of our society: law, the police, education, government, neighborhoods, families, etc. Priests and bishops, to be sure, ought to teach clearly and publicly,” he wrote.

“But I would argue that the lion’s share of the work regarding this massive societal problem belongs to those whose proper arena is the society and whose expertise lies precisely in the relevant areas of concern, namely, the laity.”

As a public figure on social media, Barron said in his recent video, he expects vocal opposition and even welcomes well-formed criticism. He said even the most finely articulated demonstration is susceptible to objections and new suggestions.

But the comments he received last week were a “moral outrage,” he said. Rather than challenges offered in love and truth, the comments were “calumny” – mean spirited accusations that violate both charity and justice.

“There is a sharp distinction between legitimate argument and calumny. A real argument, involving the marshaling of evidence, the citation of authorities, the fair and careful reporting of one’s opponent’s position, etc, is morally praiseworthy,” he said.

“For real argument fosters both truth and love. It seeks to shed light on what is really the case – truth – and to invite others to see more clearly – it’s a type of love. Calumny, on the other hand, is indifferent to truth and inimical to love.”

Among those with whom Barron has clashed in recent weeks is author and YouTube commentator Taylor Marshall, whose book “Infiltration,” claims to outline a plot by which “Modernists and Marxists hatched a plan to subvert the Catholic Church from within. Their goal: to change Her doctrine, Her liturgy, and Her mission,” according to the book’s website.

Marshall has said that bishops should lead defenses of sacred statues at risk of being torn down by rioters. After the bishop blocked Marshall on Twitter, the author has also criticized Barron’s response to criticism.

“What we see here is kinda tone deaf. We feel like we have been bullied, and pushed down and lied to by our bishops for decades,” Marshall said in a July 8 video.

In the face of attacks against Catholic statues, “we’re looking for the bishops to do something….So when we hear ‘that’s the laity’s job,’ that really ticked off a lot of people, Bishop Barron.”

Marshall said those engaging with the bishop disrespectfully should repent, but also that Barron seems not to understand the frustration of him and his supporters. “That is why you had to make a video yesterday.”

Marshall disputed the idea that he encouraged his supporters to attack Barron online, “but what you saw, Bishop Barron, were tens and tens of thousands of Catholics who want to support you outraged – is that too strong a word?- confused, bothered, that the bishop who has the biggest platform and the biggest voice would say ‘that’s the laity’s job!’ or ‘Vatican II taught that the secular arena belongs to the laity.’”

In his video, Marshall subsequently criticized Barron because he said that the bishop did not condemn “the sin of idolatry” during the 2019 Amazon synod, and that he did not believe Barron had vigorously enough defended the institution of marriage at the time of the Obergefell vs. Hodges decision. He added that the reason “trolls” antagonize Barron is because he is not sufficiently accessible to answer questions about such criticisms.

Marshall and Barron have clashed previously over theological issues. Marshall has recently criticized other bishops for their response to the coronavirus pandemic, among other things, and is affiliated with the priestly Society of St. Pius X, a traditionalist group in “irregular communion” with the Catholic Church. Barron has reportedly described Marshall as an “extremist.”

In his video, Barron said that online mob comments and abusive reviews do not help promote change but are, instead, anti-evangelical. If non-Catholics who are curious about the faith were to observe such behavior, he said, they would be repelled by the insidious comments of Catholics toward their pastors.

Catholics should be examples of charity, and model respectful disagreement within the Catholic community.

“As Tertullian reminded us long ago, what first attracted many pagans to Christianity was the obvious love that Christians showed to one another,” he said.

“Catholics on social media,” Barron concluded, “you need to pick up your game”

A picture says a thousand words: standing-room only crowd at St. Gertrude 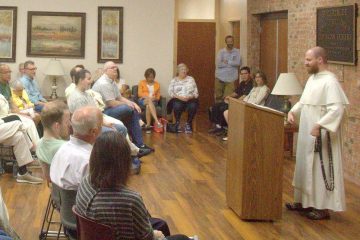