Most people know that St. Jerome — whose feast day the Catholic Church celebrates on Sept. 30 — is famous for translating the entire Bible into Latin in the fourth century A.D., creating a widely read edition later known as the Vulgate.

But likely fewer people realize how groundbreaking — and how enduring — Jerome’s work truly is. The Vulgate became the predominantly-used Bible of the Middle Ages and has endured to this day as a translation that at least one prominent linguist considers one of the very best available.

“I don’t know any other translation, either ancient or modern, so good as the Vulgate,” Christophe Rico, a Catholic linguist living and working in Jerusalem, told CNA.

Rico, a Frenchman, is a professor of ancient Greek and dean at the Polis Institute in Jerusalem, which teaches a variety of ancient languages. Working with the Polis Institute, Rico produces books to help students learn to speak and read Latin and Greek — with the goal, in part, of allowing those who wish to read the original Latin Vulgate to do so.

An expert teacher in Greek and Latin, Rico says that despite the more than 1,600 years that have elapsed since its completion, Jerome’s translation of the Bible — while not perfect, as no translation is — has proven to be amazingly accurate and very valuable for the Church.

“If you have a doubt about the soundness of a modern translation, go to the Vulgate; especially for the New Testament,” he advised, adding that the Old Testament translation in the Vulgate also is “excellent.”

St. Jerome was born around 340 as Eusebius Hieronymous Sophronius in present-day Croatia. His father sent him to Rome for instruction in rhetoric and classical literature.

Baptized in 360 by Pope Liberius, he traveled widely and eventually settled on the life of a desert hermit in Syria. He later was ordained a priest and relocated, living a solitary and ascetic life in Bethlehem from the mid-380s. It was there that he learned Hebrew, mainly from studying with Jewish rabbis. He eventually became St. Damasus I’s personal secretary.

Amusingly, linguistic genius and an admirable work ethic aren’t the only qualities Jerome is known for today. He’s also the patron saint of people with difficult personalities — as he was said to have one himself, displaying a harsh temperament and biting criticisms of his intellectual opponents.

The birth of the Vulgate

Contrary to popular belief, the Vulgate wasn’t the first time there had been a Latin Bible — at the time of Jerome, in the fourth century, there was a version already widely in use called the “Vetus Latina” (“Old Latin”), which was itself a roughly second-century A.D. translation of the Greek Septuagint. In addition, the Vetus Latina contained the translation from the Greek original of all the books of the New Testament. All the books of the New Testament were written in Greek originally, but the Old Testament — save for a handful of books — was first written in Hebrew.

Jerome did so, taking several years to painstakingly revise and improve the Latin translation of the New Testament from the best Greek manuscripts available. Rico said throughout the process, Jerome corrected certain passages and expounded on the deep meanings of many of the Greek words that had been lost in earlier translations.

For example, the Greek word “epiousios,” which was likely coined by the Gospel writers, appears in the Lord’s Prayer in Luke and Matthew and is often translated in English as “daily.” In the Gospel of Matthew, however, Jerome translated the word into Latin as “supersubstantialem,” or “supersubstantial” — an allusion, as the Catechism of the Catholic Church points out, to the Body of Christ in the Eucharist.

All of Jerome’s work resulted in a “brilliant improvement” over the Vetus Latina, Rico said.

What Jerome did next was even more ambitious. He set about translating the entire Old Testament as well, from its original Hebrew. Jerome knew Hebrew very well, Rico noted, since he had lived in the Holy Land for 30 years at that point and kept in close contact with Jewish rabbis. Jerome also had access to the Hexapla of Origen, a kind of “Rosetta Stone” for the Bible that displayed the Bible text in six versions side by side. (The Hebrew text, a transliteration in Greek letters of the Hebrew text, the Greek Septuagint translation, and three other Greek translations that had been made in a Jewish milieu.)

In an effort that would ultimately take 15 years, Jerome succeeded in translating the entire Old Testament from the original Hebrew, which was no mean feat given the fact that Hebrew was originally written without the use of short vowels.

Upon its completion, the Vulgate not only superseded the Vetus Latina in becoming the predominant Bible translation used in the Middle Ages, but it was also declared the official Bible of the Catholic Church at the Council of Trent (1545–1563).

The Vulgate has been revised a handful of times over the years, most notably in 1592 by Pope Clementine VIII (the “Clementine Vulgate”), and the most recent revision, the Nova Vulgata, promulgated by St. John Paul II in 1979.

In addition to its use today in the Traditional Latin Mass, the Vulgate has endured as the basis for the popular English translation of the Bible, the Douay–Rheims.

While again cautioning that no translation is ever perfect, Rico was quick to praise Jerome’s Vulgate for its accuracy and its importance in the history of the Church.

“For the New Testament, I have not been able to find any mistakes … The whole thing is incredible,” he said.

For his part, Jerome is today recognized as a doctor of the Church. He lived out his last days in study, prayer, and asceticism at the monastery he founded in Bethlehem, where he died in 420.

Arrest made in vandalism of Cardinal Dolan’s residence at St. Patrick’s Cathedral in NYC 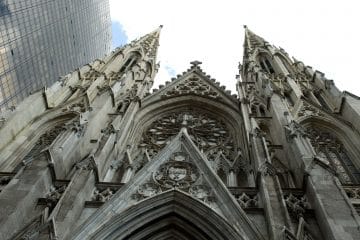