More than 400 people braved a small group of placard-carrying protesters and snow-clogged parking lots to hear Bishop Thomas Paprocki speak on the Catholic teachings on marriage and same-sex relationships Feb. 12 in the Bartlet Center at the Athenaeum.

Bishop Paprocki, leader of the Springfield, Illinois, diocese, attracted media attention last year after he performed a minor exorcism in the cathedral there after the Gov. Pat Quinn signed a law recognizing same-sex marriage.

Paprocki spent nearly an hour explaining church teachings on marriage and chastity in the context of natural and civil law, using a variety of argument techniques. But he had careful answers for those who came forward to question him after his presentation.

One woman asked if he would be willing to perform an exorcism for the priests who abused children. He first explained the difference between a minor and major exorcism, “All baptisms are an exorcism; when we renew our baptismal vows each year, we saw we renounce Satan and that is a minor exorcism.”

He also explained that the church only prescribes exorcism in extreme circumstances and that a minor form of the rite is appropriate when “the church faces persecution or its teachings are challenged.” He said he performed his exorcism in that context. He also explained that he had performed rites of reparation for the priestly abuse scandal, just as Pope Emeritus Benedict XVI had.

Paprocki started his presentation holding up an apple and an orange. He said a legislature or a judge “can pass a law or rule that both fruits shall be called apples even though it’s obvious they are not the same.” He used that analogy to explain fundamental principles of natural law that created and have, over the millennia, governed marriage.

He also explained controversial terminology used in church teaching on same-sex relationships. He said when the church calls homosexuality “objectively disordered,” many hear the phrase in a psychological context when it is intended in philosophical context.

Precious Blood Sister Joyce Kahle, Maria Stein, after reading extensive quotes from Pope Francis, asked Paprocki if he had ever talked with homosexuals and experienced the pain they experienced because of the church’s teaching. He responded that he had played a key role in adopting the Courage Apostolate when he was vice-chancellor of the Chicago Archdiocese under Joseph Cardinal Bernardin. (Terrance Cardinal Cooke of New York founded Courage.) He was also involved in bringing in and guiding EnCourage, an apostolate for family members who had homosexual children, to the Chicago Archdiocese.

At the prompting of another woman, who asked about the redemptive power of suffering, Bishop Paprocki explained that struggling with moral issues has a saving power. “You can choose to struggle or say, ‘don’t worry, be happy.’”  It’s better to suffer like Christ on the cross than to be apathetic, he explained. And he quoted Benedict XVI, who said, “There is no resurrection without the cross.”

Asked about attending same-sex marriage ceremonies, Paprocki said while the problem of creating scandal is serious, he would not damage a family relationship by not attending and cautioned Catholics to be honest in their relationship and explain their concerns to the individuals involved. He also said one could choose to attend the reception and avoid the formal ceremony. He added, however, that there could be some circumstances, like if a person was a cleric or active in a ministerial role in the church, where attending would clearly create a scandal.

The presentation was part of the Athenaeum’s Le Blond Lecture Series. Bishop Paprocki’s complete presentation is available as an online video at www.stjamesproject.org.

This article originally appeared in the March 2014 print edition at The Catholic Telegraph.

Understand, focus and believe at Mass

With joy and hope, growing Norbertine abbey to launch new community in Illinois 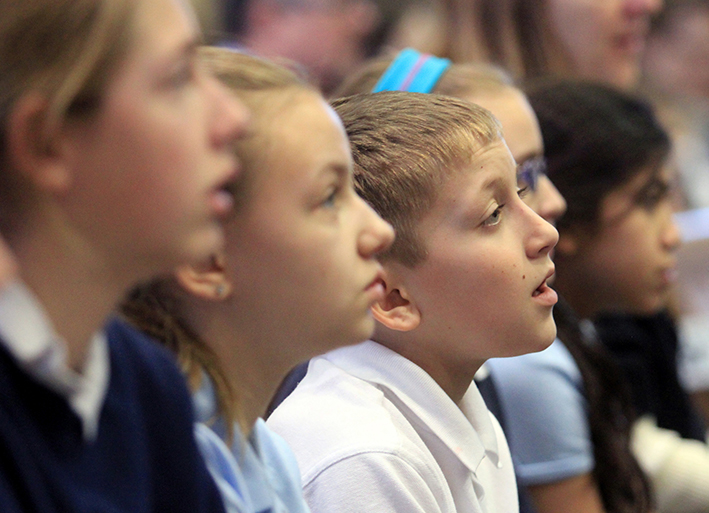