July 5, 2022 The Catholic Telegraph
Home»Features»Blessed Solanus Casey: A Man for our Time
Features

Blessed Solanus Casey is a man for our time. While never stationed in the Archdiocese of Cincinnati, he labored nearby in Huntington, IN, and Detroit, MI. His love for those around him, simple living and trust in God make him a model for modern Catholics.

The son of poor Irish farmers who labored near Superior, WI, in 1870, Bernard Francis Casey learned piety, obedience, sacrifice and strong work ethic from his parents. Often out of school to help on the family’s land, he eventually found work as a streetcar driver. In 1891, he witnessed a brutal murder on the tracks, which inspired him to enter religious life and become a source of reconciliation in a seemingly chaotic world.

Unfortunately, seminary proved difficult for Casey, who could not master the German needed to study under the German-American clerics. After four years he was asked to leave. On Dec. 8, 1896, having consecrated himself to Mary, a voice within called him to the Capuchin Franciscan friars headquartered in Detroit. Despite his struggles with studies, the friars recognized his advanced spirituality and allowed him to be ordained a priest in 1904, although without the faculties to preach or grant absolution. This was a great sacrifice for him, but he accepted it in obedience and with great humility.

For nearly 20 years Father Casey ministered in New York, then returned to Detroit. In both locations he was given menial duties not usually assigned to priests, such as sacristan, porter and doorkeeper. He discovered, however, that these tasks enabled him to be closer to those he loved most: the Lord and the poor.

Gaining a reputation for listening intently, offering sound advice, never rushing guests and showing God’s love to all, Father Casey counseled visitors, asked them to pray, and told them to trust in God. He believed that our trust in God should be so strong that we should “thank God ahead of time” for what we desire. Those who met him reported healing miracles and God-given prophetic insight for which he never took credit.

So many came to speak with Father Casey that he sometimes spent 16 hours a day fulfilling his porter duties. The long work days eventually forced him to retire in Huntington. For his funeral in Detroit during the summer of 1957, an estimated 20,000 people traveled to the monastery to pray and celebrate this holy man.

Still on the path to canonized sainthood, Blessed Casey shows Americans that the road to sanctity is accessible to all who unfailingly trust in God’s designs.

The Solanus Casey Center in Detroit and the St. Felix Catholic Center in Huntington offer encounters with God through His servant, Blessed Solanus Casey. Let us pray through his intercession that we may strive for radical trust in God. 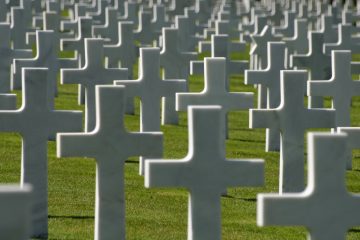