DETROIT (CNS) — Blessed Solanus Casey always said that “as long as there is a spark of faith,” there can be no discouragement or sorrow, said Cardinal Angelo Amato, head of the Vatican’s Congregation for Saints’ Causes.

His words were accompanied by “the concrete practice of faith, hope and charity in his everyday life,” said the cardinal in his homily during the Nov. 18 beatification Mass for the beloved Capuchin Franciscan friar who was known for his cures and wise counsel.

“He came from an Irish family of profound Catholic convictions. Faith for him was a very precious inheritance for facing the difficulties of life,” Cardinal Amato said. “When the young Bernard (his given name) Casey, entered the Capuchins, he passed from one community of faith to another.”

Blessed Solanus “focused on the poor, the sick, the marginated and the hopeless,” Cardinal Amato said. “He always fasted in order to give others their lunch. For hours upon hours, he patiently received, listened and counseled the ever-growing number of people who came to him.”

The friar saw people “as human beings, images of God. He didn’t pay attention to race, color or religious creed,” the cardinal said.

A congregation of 66,000 people filled Ford Field, home of the NFL’s Detroit Lions, which was transformed for the Mass. The altar, placed at midfield, was created originally for St. John Paul II’s visit to the Pontiac Silverdome in 1987. To the right of the altar was a large painting of Blessed Solanus. It was unveiled after the beatification rite, which took place at the beginning of the Mass.

Dozens of bishops, priests and deacons processed into the stadium for the start of the liturgy. The music was provided by a 25-member orchestra and a choir of 300 directed by Capuchin Franciscan Father Ed Foley. The singers were members of parish choirs from across the Detroit metro area.

In the congregation were 240 Capuchin friars and at least 300 members of the Casey family from across America and their ancestral country of Ireland. The Casey family’s Irish roots were reflected in the Irish hymns chosen as part of the music for the liturgy.

“What a witness was our beloved Solanus,” said Father Michael Sullivan, provincial minister of the Capuchin Franciscan Province of St. Joseph in Detroit, as the ceremony began “He opened his heart to all people who came to him. He prayed with them, he appreciated them, and through him, God loved them powerfully again and again.”

He is the second American-born male to be beatified, after Blessed Stanley Rother, a North American priest from Oklahoma who in 1981 was martyred while serving the people of a Guatemalan village. He was beatified Sept. 23 in Oklahoma City.

Among the hundreds, if not thousands, of healings attributed to Blessed Solanus during and after his lifetime, Pope Francis recognized the authenticity of a miracle necessary for the friar to be elevated from venerable to blessed after a review by the Vatican’s Congregation for Saints’ Causes was completed earlier this year.

The miracle involved the healing — unexplained by medicine or science — of a woman with an incurable genetic skin disease, Paula Medina Zarate of Panama. She was only recently identified publicly and she was at the Mass. As it began, she walked up to the altar with a reliquary holding a relic of Blessed Solanus.

Zarate was visiting friends in Detroit and stopped at Father Casey’s tomb to pray for others’ intentions. After her prayers, she felt the strong urging to ask for the friar’s intercession for herself, too, and received an instant and visible healing.

The miraculous nature of her cure in 2012 was verified by doctors in her home country, in Detroit and in Rome, all of whom confirmed there was no scientific explanation. Father Casey himself died of a skin disease July 31, 1957.

Born Nov. 25, 1870, in Oak Grove, Wisconsin, Bernard Francis Casey was the sixth of 16 children born to Irish immigrants Bernard James Casey and Ellen Elizabeth Murphy. He enrolled at St. Francis High School Seminary near Milwaukee in 1891 to study for the diocesan priesthood. But because of academic limitations, he was advised to consider joining a religious order instead.

He went to Detroit to join the Capuchin order in 1897. He was given the religious name Solanus.

He continued to struggle academically but was finally ordained in 1904 as a “simplex priest,” meaning he could celebrate Mass but could not preach doctrinal sermons or hear confessions.

He went to New York and served for two decades in friaries and churches there and was transferred back to Detroit in 1924, where he began working as the porter, or doorkeeper, of St. Bonaventure Monastery.

Father Casey co-founded the Capuchin Soup Kitchen in 1929 and today it serves the Detroit metro area by providing food, clothing and human development programs to the people of the community. In addition to preparing and serving up to 2,000 meals a day, the facility has an emergency food pantry, service center and a tutoring program for children.

He spent his life in the service of people, endearing himself to thousands who would seek his counsel. From 1946 to 1956, he was at the Capuchin novitiate of St. Felix in Huntington, Indiana, then was transferred back to Detroit for what was the last year of his life.

'Invest in love,' pope says on first World Day of the Poor

Thank God ahead of time: What Blessed Solanus Casey teaches about a spirituality of gratitude

How a Solanus Casey documentary, and its creator, aim to inspire

Today’s Video: The Feast of the Epiphany; What is your Gift to the Lord Jesus Christ? 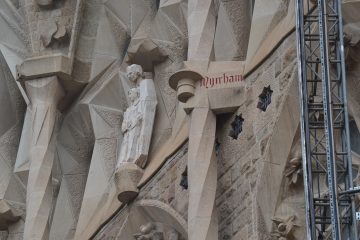