SAO PAULO, Brazil — A high court in the Brazilian state of Para has annulled an earlier verdict which acquitted a rancher of ordering the assassination of U.S. Sister Dorothy Stang in 2005.

The three-judge tribunal April 7 issued an arrest warrant for Vitalmiro Bastos de Moura, better known as Bida. De Moura will stay in jail until his new trial date, which has not yet been scheduled. The court ruled that the earlier jury had discarded testimonies that incriminated de Moura.

Rayfran das Neves Sales, who confessed to murdering Sister Dorothy, a member of the Sisters of Notre Dame de Namur, on a dusty dirt road in Anapu, Para, also will be tried again. Das Neves was convicted and sentenced to serve 28 years for the murder, but now the court said that his sentence did not take into account that he was paid to kill the missionary.

Jose Batista Afonso, a lawyer for the Brazilian bishops’ Pastoral Land Commission, told local media that the decision is “an important step to ending impunity” in the region. Afonso, however, said it is too early to celebrate since the high court decision could be overturned.

A Dayton native, Sister Dorothy lived in the Amazon region for nearly four decades, working closely with the Pastoral Land Commission. The church believes Sister Dorothy was murdered due to her work in favor of small rural farmers and her fierce opposition to large landowners who were destroying the rain forest.

In an April 7 statement from the Sisters of Notre Dame de Namur in the United States, the congregation in Brazil expressed its gratitude for the clarity of thinking of the judge and said, “We can only hope that serving justice in the case of Dorothy’s assassins is a sign that justice will be served in all cases where small farmers, workers and union representatives are victims.”

All those accused of taking part in the killing of Sister Dorothy have been tried, except for another farmer, Regivaldo Pereira Galvao who, along with de Moura, is accused of ordering the murder. Das Neves’ partner Clodoaldo Carlos Batista, was sentenced to 17 years in jail for his part in the murder. Amair Feijoli da Cunha, known as Tato, was sentenced to 17 years in 2006 for hiring das Neves and Batista. – CNS

Ordination Week: Back to the 80’s 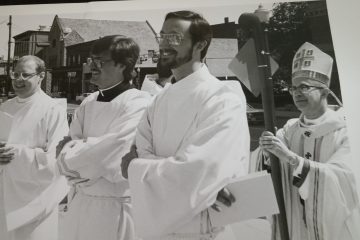