Cake, balloons and Mass celebrate the birth of Marianist founder

DAYTON DEANERY — “Blessed William Joseph Chaminade faced many challenges in his life, and he faced all of them with great courage. He found the source of his courage and strength in the Blessed Virgin Mary,” Archbishop Dennis M. Schnurr said April 8 as he helped the Marianist community celebrate the 250th birthday of their founder. “May we take time to thank God for the life and ministry of Blessed Chaminade, and we thank God for the legacy that he brought to the church in general and this archdiocese in particular.”

Special readings and hymns during the Mass at the University of Dayton related to Mary, highlighting Chaminade’s ministry as founder of the Society of Mary (Marianists). UD is one of three Marianist universities in the United States.

The university is conducting a yearlong series of celebrations and events commemorating Chaminade’s life and work. Blessed Chaminade was beatified by Pope John Paul II in 2000.

“I think Father Chaminade would be very pleased that we are celebrating the votive Mass of the Blessed Virgin on his 250th birthday. He would probably like us to talk more about the Blessed Virgin than about him,” Father Wittmann said during the homily. He described how Chaminade’s devotion to the Blessed Mother helped to form the Marianist charism, saying Mary is “the first disciple of Jesus and the most perfect disciple of Jesus … the best example of how we get ourselves out of the way so that the Holy Spirit might conform us to Christ.”
Following the liturgy, a reception was held in Kennedy Union. Birthday cake was also served in residence halls.

Other events in the year-long celebration have included lectures and liturgies, and additional events are planned. A sculpture of Blessed Chaminade by Marianist Brother Joseph Aspell will be installed in the university’s central green space. A closing Mass is planned for Jan. 22, 2012.

Chaminade, a French priest, survived the French Revolution and began the Society of Mary, also called the Marianists, in 1817. The Society of Mary founded the University of Dayton in 1850, with a strong emphasis on service to youth and the poor.

“Father Chaminade saw that in the midst of social change, which can be radical and disruptive, institutions can remain vibrant and grow. He believed new times called for new measures,” said Daniel J. Curran, the University of Dayton president. “That philosophy guides us every day as we live out the Marianist mission on campus.”

Katie Kinnucan-Welsch, chair of the department of teacher education, participates in the university’s Marianist Educational Associate program, in which faculty and staff deepen their understanding of the Marianist charism and commit to helping sustain and enrich UD’s Marianist character. The program plays a key role in reminding the UD community “who we are and what we stand for,” Kinnucan-Welsch said.

For more information on Chaminade’s history and celebratory events, visit http://udayton.edu/rector/chaminade250 or call the UD rector’s office at 937-229-2899.

Mary Caffrey Knapke can be reached at [email protected].

Cake, balloons and Mass celebrate the birth of Marianist founder 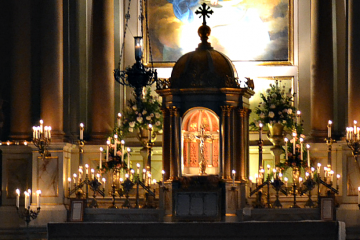