A second collection at The Cathedral of St. Peter in Chains generated $1,054 for Joyce Baresel, a parishioner who was injured in June when she was struck by a rock while riding in a taxicab.

The collection was taken at four of the cathederal’s Masses the weekend of Aug 1. The cathedral is one of five downtown Cincinnati parishes.

“We felt that given her situation of not having medical insurance and the bills her accident have presented her with, we wanted to do something to give her some help,” said Father James Bramlage, pastor of the cathedral. “She registered here as a parishioner.”

Baresel, a native of Long Island, NY., suffered facial and nerve injuries when the thrown rock entered the open window of the cab and hit her in the forehead.

She and friend were riding home in the cab along Columbia Parkway in eastern Cincinnati after an evening out when she was struck. A teenager has been charged in the incident. A judge recently ruled that the case will remain in juvenile court.

After the accident, a notice in the cathedral’s bulletin asked parishioners to pray for Baresel, Father Bramlage said.

“There were people who were suggesting we try to do something to help her,” he said. “We have a collection on the first Sunday of each month, a second collection, for the poor or needy. We’re just directing that collection this month for her.

Since the accident, several fundraisers for Baresel have been held including car washes, bike runs and restaurant sales.

Obama visit resonates with Ghanian Catholics in the archdiocese

MESSAGE OF HIS HOLINESS FRANCIS FOR WORLD MISSION DAY 2019 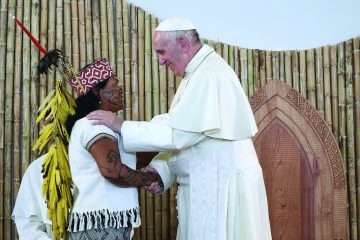