CNA Staff, Dec 14, 2020 / 06:30 am MT (CNA).- The Dayton Agreement, signed in Paris 25 years ago today, ended the Bosnian War but failed to create “a stable and just peace,” the Catholic bishops of Bosnia and Herzegovina have said.

Speaking ahead of the anniversary, the bishops called for “a just and purposeful internal organization” of the Balkan country.

“This organization must be accompanied by the enactment of just laws that will ensure real respect for all individual and collective rights, without the possibility of domination of the stronger or more numerous, and enable the correction of all old and the prevention of new injustices,” the bishops said in a Nov. 20 statement.

The presidents of Bosnia, Croatia and Serbia reached an agreement to end the conflict on Nov. 21, 1995, after negotiations at the Wright-Patterson Air Force Base outside Dayton, Ohio.

U.S. chief negotiator Richard Holbrooke and Secretary of State Warren Christopher had brought the leaders together to seek an end to the Bosnian War, which had raged since 1992 at the cost of approximately 100,000 lives.

Catholics — who are mainly Croats — are a minority within the country, comprising 15% of the population, according to a 2013 census. Half of the population is Muslim and around 30% belong to the Serbian Orthodox Church.

The Catholic bishops argued that the implementation of the Dayton Accords was marred by three significant failings.

First, it did not enable ”equality between members of three peoples and national minorities throughout the country.”

Second, it did not guarantee “sustainable return to many displaced and refugee people.”

Third, it did not ensure “compensation for destroyed and looted property to numerous citizens and religious communities in the country.”

The bishops said: “Unfortunately, it has made it possible to maintain and support conflicts during all these 25 years — by other means — especially among politicians, lawyers, media representatives and in the field of education of young generations, with multiple detrimental effects on citizens and society in our country.”

In an open letter dated Dec. 8, 1995, the bishops wrote: “This peace agreement, instead of the much-desired peace, introduces new unrest and doubts regarding the return and protection of basic human rights and freedoms, which include religious and ethnic rights and freedoms of all inhabitants of Bosnia and Herzegovina.”

“As bishops of the Catholic faithful, whose future is also the subject of this agreement, we rightly expect that all responsible factors and institutions, both international and domestic, who participated in the creation of this peace agreement for Bosnia and Herzegovina, will resolutely commit to redressing injustices and achieving as just peace as possible for all the peaceful inhabitants of this country.”

Addressing a meeting of the Bishops’ Conference of Bosnia and Herzegovina on Nov. 4, Cardinal Vinko Puljić said that events had shown the Church’s initial reservations about the agreement to be “well-founded.”

“Unfortunately, our fears expressed on that occasion were mostly fulfilled, so our message at the time proved to be well-founded,” the archbishop of Sarajevo and president of the bishops’ conference said.

Earlier this month, Puljic was admitted to hospital after testing positive for the coronavirus. Local media reported Dec. 13 that the 75-year-old cardinal had left hospital and was continuing to recover at home.

In their Nov. 4 appeal, the Catholic bishops of Bosnia and Herzegovina said: “Now, after 25 years, we must state with grief and justified indignation that this Agreement, unfortunately — through all the past years — has been used more as a justification and alibi for preserving and legitimizing various past and new injustices, and much less for building true, lasting peace, based on justice and equal rights for all.”

They criticized local and foreign officials overseeing the agreement’s implementation for failing to encourage the return of “several hundred thousand local Catholics” who had fled the fighting between 1992 and 1995.

They said: “Almost the entire Catholic population in one half of the country — in the Republika Srpska entity — has been eradicated, and in the other half, in the Federation of BiH entity, it is continuously declining, mainly due to the departure of young people from the country and entire families — mostly due to crime, corruption and political selfishness in the country and poor evaluation of professional work.”

The appeal was signed by Puljic and Vukšić, as well as Bishop Franjo Komarica of Banja Luka, Bishop Petar Palić of Mostar-Duvno, and Auxiliary Bishop Marko Semren of Banja Luka.

The five bishops concluded their appeal by saying: “The Catholic Church in Bosnia and Herzegovina will continue to strive — consistently and tirelessly — to fulfill its duty received from its Supreme Leader — the pope — and its promise given 25 years ago, ‘to help in the realization of all constructive and enforceable solutions in establishing true peace on the territory of our bishops’ conference, that is on the territory of the whole of Bosnia and Herzegovina.’”

Is Christmas simply a re-imagining of ancient pagan celebrations? 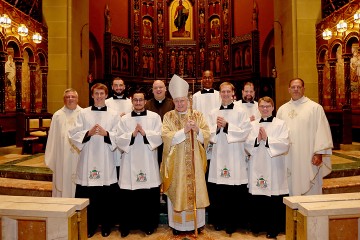