ROME (CNS) — In an Italian nature reserve surrounded by a forest inhabited by wild boar and foxes, a group of families is seeking to embrace the lifestyle of New Testament-era Christians.

“In the Acts of the Apostles, it is written that they lived with one soul and heart and held all things in common,” said Susanna Scifoni, a member of the Nomadelfia community on the outskirts of Rome.

Following that principle, community members live together and share the responsibilities involved in their work of welcoming visitors and with cooking, cleaning and gardening for the community. They grow bok choy, fennel, lettuce, spinach and chicory, raise chickens and assist their local parish in its Caritas operation.

Nomadelfians, as they are sometimes called, receive no pay for their work, but they also do not need money for anything within the group’s 25-acre property.

“If work is an act of love, an act of love can’t be paid for because it has a price that would be infinite,” Scifoni, 24, told Catholic News Service.

“There should be neither servants nor masters, for we are all brothers and sisters,” she said.

An Italian priest, Father Zeno Saltini, founded Nomadelfia in 1948, naming the community after the Greek expression meaning “the law of fraternity.”

Paolo Matterazzo, 29, said that if the group’s ideas sound revolutionary, they should.

“In the DOCAT,” the Catholic Church’s youth-oriented compendium of social teaching, it says, “if you want to be a Christian, in spirit you have to be revolutionary; if you aren’t revolutionary, you aren’t Christian,” Matterazzo said.

Though there may be a temptation to compare some of Nomadelfia’s ideas to communism, members said there are important differences between their economic philosophy and Marxist ideology.

Even Pope Francis has been accused of espousing communism when he promotes an economy based on solidarity and sharing. But, Matterazzo said, the pope has responded, “I am not communist; I am Christian.”

“In communism there is no forgiveness,” Matterazzo said. “Our purpose is to lead people to God.”

Nomadelfia members have been encouraged by the pontificate of Pope Francis, who often critiques modern economic values and the “idolatry of money.”

The pope “insists a lot on the fact that money should not govern but serve,” Scifoni said.

While relationships within the community are money-free, Nomadelfia does accept donations for the community’s upkeep and uses money in its relationship with the world, paying for tools, cars and supplies that make its religious life possible.

The challenges of living in common and sharing property are such that Nomadelfia members describe their lifestyle as impossible to sustain without a vocation to live it.

To avoid members becoming overly attached to possessions, or even to the family groups they live in, they rotate homes within the community every three years.

The life is clearly not for everyone. Nomadelfia members report that 70-80 percent of children raised in the community leave at 18 to seek work and a life in the world.

Some, though, leave for university or work only to discover later that God is calling them back to Nomadelfia.

Maria Paolucci, 28, moved into Nomadelfia with her family when she was 9. After leaving the community for university and spending time traveling internationally, she decided to return to Nomadelfia last September.

Having an experience of the outside world “reinforced the idea that Nomadelfia could be a response to many of today’s problems, starting with those of the family, problems of loneliness,” Paolucci said. For such social ills, living in “a community context is undoubtedly a winning proposal.”

Nomadelfia’s main campus is located near Grosseto in the region of Tuscany, where the group of 60 families owns 990 acres of rural land and runs its own school for the children raised within the community. The smaller branch located in Rome occupies buildings once part of a Benedictine convent, and it has a special mission of evangelization.

“We want to show that even today, despite everything, even in cities like Rome where we are now, it is possible to live out the principles proposed by the Gospel,” Scifoni said.

Nomadelfia’s Rome site, called the John Paul II Center for Spirituality, welcomes 2,000 visitors each year. Carlo Sbaraglia, the 67-year-old in charge, said there is a cultural reason more people are inquiring about their way of life.

For example, Rod Dreher’s new book, “The Benedict Option: A Strategy for Christians in a Post-Christian Nation,” details the approach of many such communities and landed on the New York Times’ best-seller list last month in the United States.

“Many people are looking for a new world to live in,” he said, pointing out that despite modern means of communications, “there is a lot of loneliness.”

There is a need to rediscover human relationships that are “not fiction, not online, but real, authentic, concrete,” Sbaraglia said.

Today’s Video: A quick look at Ordination 2019 in the Archdiocese of Cincinnati 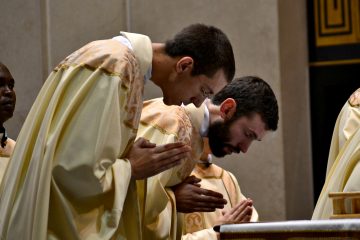