Rome’s De Donatis is first cardinal known to have coronavirus

Vatican City, Mar 30, 2020 / 12:45 pm (CNA).- Cardinal Angelo De Donatis, vicar general of the Diocese of Rome, has tested positive for coronavirus. He is the first cardinal known to have the virus.

The cardinal has been admitted to the Gemelli Hospital in Rome with a fever. He is reportedly in good condition, and his close collaborators are reported to be self-isolating, according to a statement from the Vicariate of Rome.

“I feel serene and confident amid this trial,” the cardinal said in a statement March 30. “I entrust myself to the Lord and to support from the prayers of all of you, dear faithful of the Church in Rome.”

“I live this moment as an occasion given to me in Providence so that I can share the sufferings of so many brothers and sisters. I offer my prayers for them, for the whole diocesan community and for the inhabitants of the city of Rome,” the cardinal added.

While Pope Francis is the Bishop of Rome, the day-to-day leadership of the diocese is provided for by De Donatis, who enjoys broad vicarious authority delegated by the pope.

The cardinal, 66, was chosen by Pope Francis in 2014, while not yet a bishop, to offer the Lenten spiritual exercises to the Roman Curia, a job traditionally given to a cardinal. In 2015 he became an auxiliary bishop in Rome, and became vicar general of Rome in 2017. He was created a cardinal in 2018.

One Catholic bishop is known to have died from the virus, which is a global pandemic, and several have been diagnosed with it, among them is New Orleans’ Archbishop Gregory Aymond. Nearly 100 priests are reported to have died of the virus.

Rome’s De Donatis is first cardinal known to have coronavirus 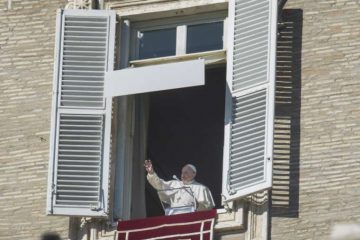