ST. ANDREW DEANERY — It takes faith and courage to turn tragedy into an opportunity to help others. Linda and Tony Cole have done just that in sharing the story of how they found the strength to make difficult decisions, preserve their family and accept God’s will after a devastating incident forever changed their lives and that of their son, Anthony.

In 1998, at the age of 12, Anthony Cole collapsed on his school playground. Rushed to Cincinnati Children’s Hospital Medical Center, he was diagnosed with Wolff-Parkinson Syndrome, which involves an extra electrical pathway to the heart, resulting in episodes of rapid heartbeat. Deprived of oxygen while unconscious on the playground, Anthony Cole was left with severe brain damage and permanent physical and mental limitations.

Tony Cole recalls sitting in the hospital waiting room, praying and waiting for news. “I had to rely on God and His plans for Anthony and our family,” he said.

The Coles, members of Good Shepherd Parish in Montgomery, learned their son would live, but would never be the same again. Thus began the journey that led them to co-write and share their experiences in Resurrecting Anthony: A True Story of Courage and Destination (Alexandra Publishing, 2011).

In the aftermath of their son’s brain injury, hospitalization and rehab, his wellbeing remained the Cole’s focus. Their company, Anthony Cole Training, which provides sales training and consulting across the country, was on the backburner. It was in the process of writing a business book that Linda Cole said she became inspired to instead write about their journey with Anthony.

“It was a book that had to be written, and Tony agreed,” she said. “I realized many people could be helped by the personal courage aspect and the family relationship aspect. My goal is to help other people get through hard times, letting them know they aren’t alone, that there are things that can get you through.”

For the Coles, also the parents of a daughter, Alex, that was prayer and their relationship with each other. “Early on, I was praying almost constantly,” Linda Cole recalled. “There were times Anthony was going through some awful things, and I had to step back and turn it over to God.”

“I prayed for courage, strength and wisdom to make the decisions that I needed to, and that we would survive as a family,” Tony Cole added. “We got through this because of the commitment we made to each other and to our family.”

Linda Cole admits the writing process was “excruciating” as she relived every painful moment of Anthony’s experience, but the end result was a book she hopes inspires and assists other families.

In addition to the Cole’s personal story of courage, Resurrecting Anthony also includes coping strategies for crisis, suggestions for dealing with insurance companies, hospitals, schools and government agencies and an alphabetical directory of resources. In addition, Linda Cole, established Alexandra Publishing in 2009 with the hope of eventually sharing other inspirational narratives geared toward empowering readers to meet and overcome their own challenges.

Tony Cole has also found a way to reach out and inspire others by incorporating his son’s story into his training sessions and keynote addresses. One message he strives to share with businesses and other groups in his presentation titled “Ignite the Fire Within” is the importance of living in the present and loving and connecting with those we love before they are taken from us, or we from them, Cole said.

His son has joined him for several presentations, and watching him charm the crowd has been a reminder of “how proud I am to be his father.”

“This is my ministry, what Anthony and I are supposed to do with our lives,” he added.

Now 24, Anthony Cole relies entirely on medical personnel and family members for his care. He has developed a close friendship with one of his nurses, Reggie Raglan, who is with him four days a week. His short-term memory is poor, but he can answer questions, has a good sense of humor and positive attitude, Linda Cole said.

In fact, when visitors pose the question, “How are you doing today, Anthony?’ his typical response is, “Every day is a good day from the great Lord above.”

“To him, life really is simple,” his mother said. “He has basic needs — his family, social outlets like the CARE program at Goodwill and karaoke at the Pleasant Ridge Recreation Center — those things make him pretty content.” 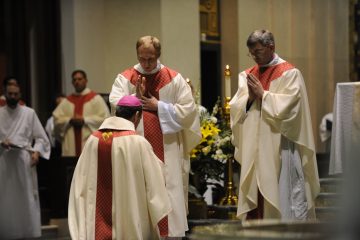