It is that simple yet incredibly profound prayer that has guided much of Tony Stieritz’s career thus far. It is a prayer that led him through his 14-year tenure as Director of Social Action for the Archdiocese of Cincinnati. It is also the prayer that brought him to Catholic Charities of Southwestern Ohio (CCSWO) as Chief Operating Officer (COO) in 2018.

And it was that ongoing discernment, following where Christ leads, that landed Stieritz in this current role as Chief Executive Officer (CEO) for Catholic Charities following the retirement of his predecessor, Ted Bergh.

It is difficult to imagine a more comprehensive introduction to Stieritz’s new position as CEO when considering his background. In his previous role as COO, he oversaw operations of the 11 charitable programs that Catholic Charities provides its clients; mental health services, mobile food pantries, support for refugees and assistance for immigrants and the elderly counted among
them. Additionally, Stieritz had about 18 months to form and forge solid relationships anchored in trust both with colleagues and community partners alike. 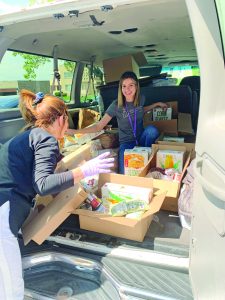 However, in between the time he accepted the position in February and officially started on April 6, the entire world radically changed. Stieritz’s prayer has never been about him, but about what God wants of him. The answer has consistently been to serve God by serving others. That is one thing this global pandemic did not change.

“What we are about at Catholic Charities is building a community of hope,” said Stieritz.

The community to which Stieritz refers to is far reaching, and it includes the life-giving and mission-sustaining donors – both large and small – who keep the doors open and the services available. It is the clients in need, young and old, black, brown and white, who desperately need these signs of God’s love in their lives. It is community partners, like the Freestore Foodbank, who help magnify the impact of Catholic Charities’ success. It is the men and women employed by Catholic Charities who work tirelessly during these uncertain times.

At this unusual moment in human history, CCSWO has shown itself to be nimble and creative as they adapt to continue serving those in need while acting as good stewards for their partners in mission – who include donors like you. Mobile food pantries, needed more now than ever, have been converted to drive-throughs to keep everyone safe. Care packages of food and diapers are being porch-dropped for moms and babies and therapists and social workers are using video chat and teleconferencing for casework and client support.

Resources are being smartly directed to critically pressing needs and the departments within CCSWO are not insulated from each other, but working together wherever they are needed to support not just the community, but each other as well.

COVID-19 will not last forever, but the lessons learned and some of these new ways of doing things will likely persist. Video conferencing and meetings will likely be part of the new normal. Drive-through food pantries may prove to be useful going forward as well. Most importantly, though, is what will not change.

“It is our determination. It is our spirit. It is our faith – that what we are doing is what Christ wants us to do. That’s what is going to keep Catholic Charities moving forward in the end. The more that people are connected, the stronger we are,” said Stieritz.

Madison diocese says it will sue over religious restrictions