Washington D.C., Apr 27, 2020 / 03:37 pm MT (CNA).- President Donald Trump held a call with more than 600 Catholic leaders on Saturday that focused on education and relief funding during the coronavirus pandemic.

Catholic educational leaders on the call touted the work of Catholic educators during the pandemic, and explained the financial difficulties facing Catholic schools.

Bishops, diocesan school superintendents, and other Catholic stakeholders from across the country all participated, according to a briefing on the call provided by the White House, and accounts of participants.

Trump also used the call to tout his credentials on life and religious freedom issues during an election year.

Archdiocese of Denver schools superintendent Elias Moo was selected to speak during the call.

“I spoke to the president about the long history of Catholic education in our country, and how our nation needs schools that provide an educational experience that forms the whole child and values the primacy of parents and of the soul of the human person,” Moo told CNA.

“I also told him of the phenomenal job our Catholic schools across the Archdiocese of Denver are doing in serving over 12,000 students from a diversity of backgrounds, cultures, countries of origin and economic situations, at three-fourths the cost per student of our public-school counterparts,” he added.

With the mass closures of offices and schools in recent months, Catholic schools have had to make a rapid transition to distance learning.

Many Catholic schools are facing with a funding shortfall as a result of the economic downturn; and some dioceses have announded school closures.

“The parochial school system is in the middle of enduring a systemic shock to their finances, and certainly to their students and teachers,” said Lou Murray, who was on the White House call. Murray is the chairman of the board of Boston Catholic Radio.

On Saturday’s call, Catholic bishops— including Cardinal Sean O’Malley of Boston and Bishop Michael Barber of Oakland, the USCCB’s education committee chair—along with several Catholic diocesan superintendents noted the importance of the PPP loans for Catholic schools to continue operating, and asked for tax deductions for parochial schools and direct tuition aid for parents, according to accounts from leaders on the call.

Christopher Check, president of Catholic Answers, told CNA that he asked Trump on Saturday to work with bishops, and state and local leaders, to quickly resume public Masses and liturgies.

Education Secretary Betsy DeVos was also on the call, and spoke well of Catholic schools, Murray said, especially as an alternative to public schools.

According to the White House, Catholic leaders also “expressed their appreciation for President Trump’s strong pro-life stance and many bold actions to protect religious liberty, for appointing conservative judges.”

The issue of immigration did not come up on the call, Murray said, even after Trump on April 22 signed an executive order barring many immigrants from entry to the U.S. by suspending access to green cards, during the pandemic.

On Thursday, days before the call, Archbishop Gomez and immigration leaders at the USCCB—Bishop Jaime Soto of Sacramento and Bishop Mario Dorsonville, auxiliary bishop of Washington, D.C. — had warned that the order “threatens instead to fuel polarization and animosity” and would prevent immigrant family reunification and religious workers from entering the U.S.

Trump also made note during the call that the November general elections are only months away. Some participants noted that at the end of the call Trump cited the election date and warned that conditions could worsen for Catholics and Catholic schools if a Democratic administration were to take office.

But Moo told CNA that the importance of being on the call was not about politics.

“Regardless of one’s political affiliation or preference, it is important for the Church to engage with public officials to discuss the issues that are central to our Catholic faith and mission. In this case, it was the importance and value of Catholic schools as a critical part of the educational fabric of our nation,” Moo said.

Shortly after the call, Trump tweeted that he would be “online” for the livestream of Sunday morning Mass at St. Patrick’s Cathedral in New York City. “Join me,” he said, tweeting out the link to the livestream.

On Sunday, Trump again tweeted to Cardinal Timothy Dolan of New York, “Thank you for a great call yesterday with Catholic Leaders, and a great Service today from @StPatsNYC!”

It was the second consecutive weekend that Trump held a call with religious leaders. Last weekend, Trump hosted an April 17 call with faith leaders including Cardinal Dolan, as well as Archbishop Jose Gomez of Los Angeles—president of the U.S. Catholic bishops’ conference—and Carl Anderson, Supreme Knight of the Knights of Columbus.

A White House briefing on that call said that Trump “expressed his eagerness to get churches, synagogues, mosques and all houses of worship back open as soon possible.”

In accord with federal and state guidelines issued in response to the pandemic, public Masses were curtailed in all U.S. dioceses for several weeks including over Easter. The diocese of Las Cruces, New Mexico, became the first diocese to announce the resumption of public Masses during the Easter octave, and several U.S. dioceses have followed suit. 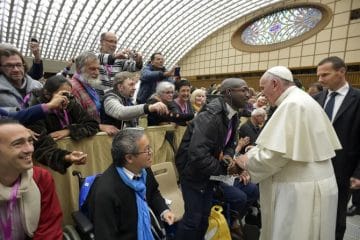