When Father Rob Waller boarded Holland America Lines MS Westerdam in mid-January for a cruise to Southeast Asia, he anticipated a great adventure. What he didn’t anticipate was a COVID-19 scare that would ultimately lead to a unique bonding and prayer experience for the passengers and crew and meaningful ministerial opportunity for him as the ship’s resident priest.

Formerly the longtime pastor at St. Andrew Parish in Milford, Father Waller was introduced to service as a cruise ship chaplain after retiring in 2015. At the encouragement of Father Ken Baker, he joined the ranks of Apostleship of the Sea, a U.S.-based organization that places Catholic priests on cruise ships to ensure passengers have access to the sacraments while on vacation.

“The traveling piece appealed to me, and I had the time,” Father Waller said, “plus it’s significant for the passengers and crew and the opportunity to be present to them. The priest on board is responsible for Sunday and daily Masses. You kind of have a leg in both worlds. You’re part of the crew, but with passenger privileges.”

Father Waller’s travels thus far have taken him to destinations such as Alaska, the Panama Canal and the Norwegian Fjords. Father Waller joined the Westerdam in Singapore on Jan. 16 for a 28-day cruise. The ship, carrying 1,455 passengers and 802 crew, made scheduled stops in Thailand, Cambodia and Vietnam, before docking in Hong Kong, where the Westerdam spent about 34 hours as 800 people disembarked and 800 new passengers came on board. Although there was no sign of coronavirus on the ship, there was concern because Hong Kong has been so hard-hit by COVID-19 that the Westerdam was denied entry by Japan, the Philippines, Guam and Thailand.

The result was many days at sea as the Westerdam passengers and crew formed their own community of sorts, with Father Waller continuing to provide daily Mass, hearing confessions, encouraging prayer and providing pastoral care. Being turned away at Manila was especially difficult for the many Filipino crew members, he said.

“They crew were going to be welcoming something like 800 of their family members on board to spend the day on the ship, to see where their loved one lives and works, and for six hours to do all the things on the ship that we passengers do all day long every day,” Father Waller explained. “On top of that, moms and grandmas were bringing home-cooked food. Down on A Deck, the crew has a Filipino cook in the mess hall, but the food is nothing like the food Mom and Grandma make at home. And even on top of that, there were a couple dads who were going to be holding their newborn children for the first time.”

While there was some anxiety on board the ship, Father Waller acknowledged, the passengers and crew generally remained in good spirits and kept a sense of humor about their shared predicament. They prayed a novena for illness or the virus, and Father Waller appreciated the increased opportunity to be present to his traveling companions. The entertainment staff took it upon themselves to create additional activities for distraction and entertainment, including a corn hole tournament, dance trivia game, and a poolside “radio show.”

“The crew was extraordinary, even more so than usual,” he said, “and the passengers treated them so well, constantly expressing gratitude. It made me very proud to be the priest on board the Westerdam during this situation.” 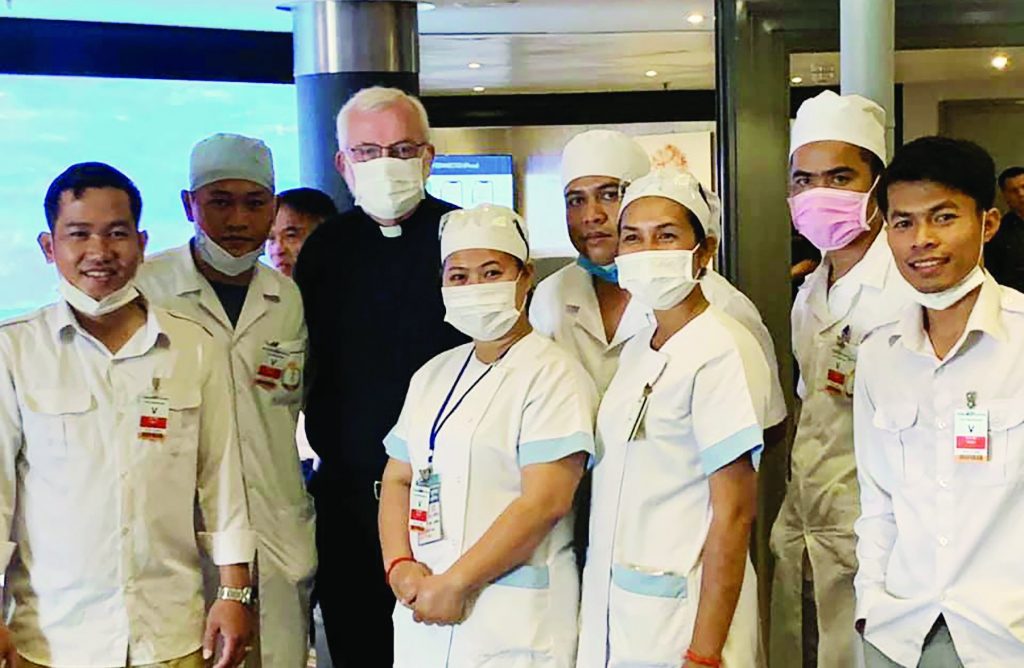 The Westerdam finally received word that the ship would be welcomed to dock in Cambodia and use the airport to fly home. The ship arrived at the port of Sihanoukville on Feb. 13. Amid much fanfare, the Cambodian prime minister flew in the next day via helicopter to greet passengers and crew. There were flowers, speeches and gifts for the weary travelers, as the first group disembarked. The first passengers to leave the ship boarded buses and left the port on their way to the small airport in Sihanoukville. From there, they boarded charter planes, which took them to the large international airport in Phnom Penh to catch their flights home. Other groups departed over the next several days.

Concerns developed when an 83-yearold American woman, who showed no signs of illness on board, felt unwell upon arriving in Malaysia and tested positive for COVID-19. The diagnosis raised
fears that others who had been on the Westerdam may have unknowingly been carrying the virus. Later testing on the woman came back negative for COVID-19.

The morning following his return home, Father Waller reported to the Miami County Public Health Department on his own initiative. He then immediately began self-quarantine  at home, taking his temperature twice daily and reporting it the epidemiologist. To those who expressed their concern for his welfare, Father Waller shared that his thoughts and prayers remained with his friends on the Westerdam and he felt like he had “abandoned ship.”

“Right now, I do not need anything, except to know that things are resolved for the passengers and the crew. Until then, I will feel unsettled and isolated,” he told neighbors and friends.

Father Waller has no travel plans for the remainder of 2020, but “absolutely” will cruise again in the future. Meanwhile, a lesson learned on the cruise and reminder for all of us moving forward, he said, is that “We and the whole world are in this together.” 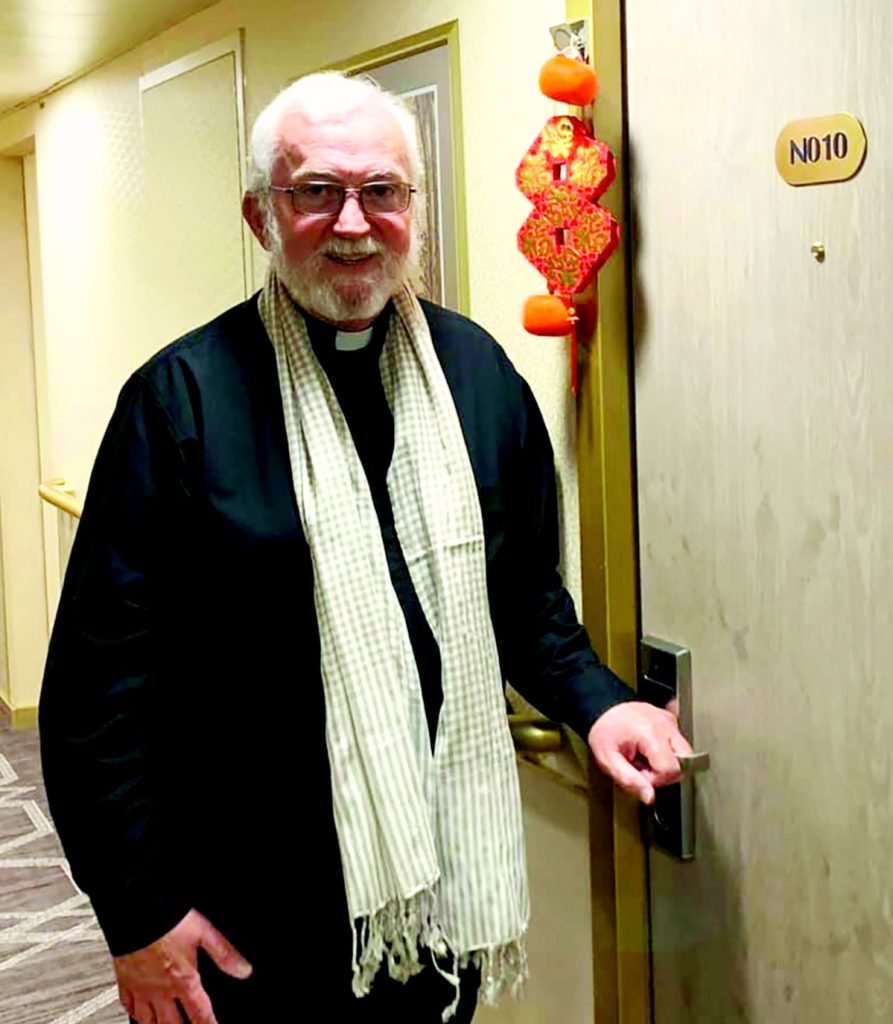