The first known garden to be officially dedicated to the Virgin Mary bore little resemblance to the idea of the “Mary Garden” we know today. It was not filled with purely ornamental flowers,
decorative topiaries and manicured nooks punctuated here and there with lovely statuary. This particular garden of prayer and contemplation was a working garden. It was filled with medicinal herbs and vegetables to feed and cure the pilgrims and locals – peasant, pauper and prince – who visited in search of St. Fiacre’s famed gifts for healing, holiness and charity.

Saint Fiacre
Widely renowned and highly trained in medicinal herbs, this 7th Century Irish saint became a victim of his own fame. It is said that so great was the demand for Fiacre’s healing abilities and holiness that he left his homeland and crossed the English Channel to the region of Gaul (France) seeking respite. However, the fruits of his quest were far from the solitude and quiet life of prayer he sought. Instead, he founded a monastery, a hospice for travelers who were seeking spiritual and physical relief, and an oratory surrounded by gardens dedicated to “La Mère de Dieu,” or the Mother of God.

It was there that St. Fiacre and his fellow monks grew various botanicals to make pastes, poultices and other concoctions from plants such as mugwort, feverfew, hemlock and flax. Many of the specimens had more than one use. Peach tree leaves were used to stop bleeding. Wine was pulled into medicinal service as a mixing agent for other potent herbs and was even used to dress wounds. Equally important were the edible plants such as onions, parsnips, carrots and leeks grown to feed those in need of hospitality and charity and, of course, for the monks.

All of this was dedicated to Our Lady. It was not the plants themselves, but why they were grown that elevated a cultivated patch of earth to a beautiful devotion to the Virgin Mary. The prayerful reflection in pulling weeds, collecting seeds, turning up the warming soil to foster and cradle growing life that will give life to others – these things are what made St. Fiacre’s garden a Mary garden.

Hope in Times of Pandemic
The first recorded plague pandemic, the Plague of Justinian, was still reeking havoc across Europe, Asia and Africa during St. Fiacre’s life. Travel was fraught with danger, people were frightened, weary and wary. But in the garden of St. Fiacre and other monastic gardens across Europe, grew charity, hope and mercy – rays of light in those “Dark Ages.”

Like St. Fiacre, we also find ourselves in an uncertain and sometimes frightening moment in history. Travel is dangerous. We are weary and wary. But we can also be rays of light in what can feel like a dark time.

How will your Mary Garden grow?
Will you fill your garden with tomatoes and zucchini to share with neighbors and your parish food pantry? Or will you cut flowers to leave on the doorstep of the church or to cheer the sick? Will you give cuttings, starts and know-how to beginners or become a beginner yourself, prayerfully and lovingly tending a single geranium in a terracotta pot? Acreage or expensive stone statues and benches, as lovely as those things may be, aren’t necessary for a Mary Garden. But letting Mary grow in our hearts, that is essential.

Question of Faith: What is Spiritual Communion?

Investing in your child’s Catholic education 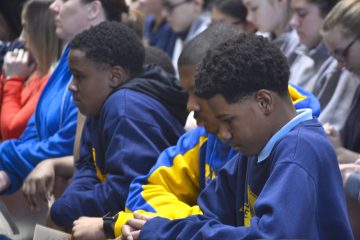