Everyday Evangelists: Farmer sows the ‘seeds for growth’ in Monroe

HAMILTON DEANERY — David Brausch isn’t one to dwell on his philanthropy, but he has been proud to help his parish in a significant way for the past three years.

Brausch is responsible for farming 1,200 acres — 100 acres are his own — in Clarksville, which is north of Cincinnati. With his land and equipment, Brausch has operated a program called Seeds for Growth through Our Lady of Sorrows Parish in Monroe.

Each spring, the parish donates up to $4,000, depending on the crop, to buy seeds, fertilizer and weed control for the farm. Last year, there were about 20 acres of soybean, and the first year corn was grown. Corn is the crop again this year.

Brausch does the planting and takes the harvest to market. The goal for the parish is to get 20 acres each year, but that number is always surpassed. Once everything is completed at the market, Brausch said the total in November can be up to $13,000, all of which is donated back to the parish and benefits the building fund.

While Our Lady of Sorrows is a 30-minute drive from Clarksville, it doesn’t stop parishioners from occasionally checking in on their crops at the farm.  “I think the parish enjoys it,” Brausch said. “I enjoy the heck out of it.”

To help celebrate autumn and the proceeds from the crops, several hundred parishioners usually attend a “Harvest Mass” at the farm. This year the Mass is scheduled for Sept. 26.

“He makes it really fun and nice,” said Brenda Heing, the office manager at Our Lady of Sorrows. “He is a great guy.”

The Mass is held later in the day at 4 p.m., in the farm’s front yard. There is a dinner afterward in the barn, with the parish providing fried chicken and parishioners bringing covered dishes. The day also has activities for children and families, such as horse rides and a maze.

“It’s unbelievable,” Brausch said. “It’s not even the money that is the driving force anymore. It really is the prize — how it draws everyone together. It makes the parishioners feel that they have a vested interest. It’s almost like a mini-festival.”

But September is extra special this year. Brausch and his fiancée, Stephanie Lichtenberg, will be married on Sept. 19 at Our Lady of Sorrows Church, with a reception following at the farm.

Lichtenberg is an usher and eucharistic minister at the church and both will help with the festivities on Sept. 26. Brausch said he and his fiancée enjoy being active members of the parish.

“It’s a very warm group,” Brausch said. “The best thing about OLS is the way they minister to the community. They have more stuff going on. It’s all about the ministry — it’s the fiber of the church.”

Brausch, 38, has certainly helped minister to his parish community. Although he grew up farming, he attended Ohio State University without plans for continuing that work. His brothers became engineers, and it wasn’t until his junior year of college that he decided to commit to farming for the long term. Farming became a passion for Brausch, who has been active in that occupation since 1994.

Brausch said his farming experience helped him form the idea for Seeds for Growth after he read a newspaper article a couple years ago about a farmer who had financial trouble and received help from his neighbors. He said his strong belief in the Lord has been an integral part of what he does to help others today.

“My faith is very important,” Brausch said. “I think it’s part of farming. Nothing I do is without God’s help. Anytime you plant a crop, it’s a leap of faith.”

Everyday Evangelists: Farmer sows the ‘seeds for growth’ in Monroe

Share in history as the archdiocese’s first Catholics saw it, only online. 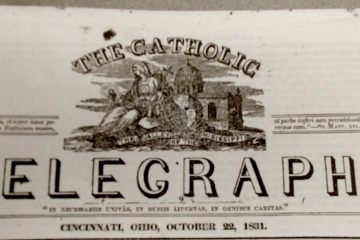