God’s existence can be known using our minds. It is accessible to reason and therefore not necessary to believe in the Bible or the revelation of Jesus to acknowledge God’s existence. As the Catechism states, “By natural reason man can know God with certainty, on the basis of his works” (CCC, 50). This is to say, humanity has evidence of God through perceiving the created world, which leads to the question: Where did all of this come from?

Philosophers and theologians have advanced proofs for God’s existence that do not require belief in divine revelation. They are called proofs not because they are scientifically provable — they do not involve telescopes or microscopes — but in the sense that they offer “converging and convincing arguments” (CCC, 31). Based in fact as well as a series of logical deductions, some of the arguments originate in philosophical thought that predates Christianity and from a time before the Bible was compiled.

One of the best-known proofs begins with the question: Why is there something rather than nothing? Everything that is created has a cause, but since nothing can cause itself, there must be something/someone that is uncaused – and that uncaused being, from which everything has its source, we call God.

Governing nature are laws such as gravity, which do not appear to be random but conducive to the flourishing of life. For example, were gravity a bit weaker or a bit stronger, stars would not have formed and life could not have begun. We can ask: Why does the natural world exhibit such regularity? Why isn’t the world lawless and random? The laws of nature are incapable of explaining their origins, and so there must be a designer of these laws – and this designer we call God.

In the created world, attributes can be compared. Some things are better or worse than others, having more of a certain quality than others. For there to be degrees of anything, there must be something/someone with an unsurpassable degree. This is the maximum to which all others can be compared. By consequence there must be a being that possesses a perfect, unsurpassable degree of perfection, goodness, etc., and this unsurpassed being we call God.

Like any kind of philosophical proof, some are more persuasive. Possible objections can be considered, and the arguments can be developed in much more detail as contemporary thinkers such as Peter Kreeft, Edward Feser and Matt Fradd have done. But none of these proofs require religious faith. They show that a person does not need to be a Christian to believe in God. The existence of God can be derived from reason and humanity’s common experience. That humans are hard-wired to believe in God may be argued from the various religious traditions that posit the existence of the divine (even if they do not believe in the Judeo-Christian God).

God reveals Himself to His creatures. It is possible for an agnostic to come to believe in God while looking out from a high mountain, becoming overwhelmed with the beauty, intricacy and order of the world. Or parents at the birth of their child acknowledge that God must have a role in such an amazing creation as a new human life.

These realizations are not surprising. God does not want to hide. He has revealed and continues to reveal. Indeed, the maximal revelation possible occurs in the incarnation of Jesus. But even for the person who does not believe in Him, there is reason to believe in the God who creates, communicates and can be conceived of, without relying on the Bible.

Taking the time to wait for God 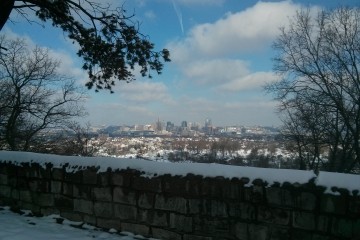