Fr. Richard Nieberding, C.PP.S., died unexpectedly on Saturday, July 20, 2019, in the rectory of Our Lady of Guadalupe Parish, Montezuma, Ohio, where he was the pastor. He was 66.

He was born on January 19, 1953, in Dayton, to Edward and Mary (Jutte) Nieberding. He attended Precious Blood School then entered Brunnerdale, the minor seminary of the Missionaries of the Precious Blood, in Canton, Ohio, in 1967. Ordained on June 28, 1980, Fr. Nieberding was a graduate of Saint Joseph’s College in Rensselaer, Ind., and the Catholic Theological Union, Chicago.

His first assignment was to Sts. Peter and Paul Parish in Ottawa, Ohio. In 1985, he became an associate pastor at St. Augustine Parish, Minster, Ohio.

Fr. Nieberding became the youth program director at the Spiritual Center of Maria Stein in 1990. Working with Br. Bernie Barga, C.PP.S., he organized programs and led retreats and parish missions with a focus on the youth.

In 2005, he returned to St. Augustine as its pastor, also ministering at St. Joseph Parish in Egypt, Ohio. On June 4, 2019, he became the pastor of Our Lady of Guadalupe.

Survivors include three brothers and their wives, Ed (Michele) of Worthington, Ohio; John (Kathy), Columbus; and Ron (Amy) of Nashville; three nieces and one nephew; and three great nieces.
He was preceded in death by his parents.

In his youth, Fr. Nieberding was an accomplished athlete, excelling in baseball and soccer. He was interested in history, the national park system, cycling, stand-up comedy, and sporting events. He was an avid Ohio State Buckeye fan, cheered loudly for the German National Soccer Team, and was a devoted supporter of the Minster Wildcats.

Throughout his life as a priest, Fr. Nieberding was drawn to youth ministry, even as he oversaw many other aspects of parish life. He planned events for youth that helped them see that they were an important part of the parish. Above all, he was a gifted storyteller, skillfully using humor to illustrate a point. He was named Citizen of the Year in Minster in 2009.

A Mass of Christian Burial will be celebrated at St. Charles Center, Carthagena, Ohio, at 2 p.m. on Friday, July 26, with Fr. Ken Schnipke, C.PP.S., vice provincial director, presiding. The homilist will be Fr. Don Davison, C.PP.S. After that Mass, a viewing will be held from 4-8 p.m. Friday and 9-9:30 a.m. Saturday at St. Augustine Church, 48 N. Hanover St., Minster, Ohio.

A second Mass of Christian Burial will be celebrated at 10 a.m. on Saturday, July 27, at St. Augustine with Fr. Ken Schnipke presiding. The homilist will be Fr. Gene Schnipke, C.PP.S. Burial will follow in the St. Augustine Cemetery.

In lieu of flowers, memorial donations may be made to the Missionaries of the Precious Blood, Cincinnati Province, or to the Blest from Above organ fund at St. Augustine Parish.

From The Missionaries of the Precious Blood, Cincinnati Province:

Father Rick, who was appointed pastor of Our Lady of Guadalupe Church in Montezuma, Ohio, on June 6, was scheduled to preside at a 1:30 PM wedding at the parish. When he did not show up, members of the wedding party went to check on him in the rectory. They found Father Rick unresponsive on the living room floor. Emergency medical personnel were contacted and Father Rick was declared dead. An autopsy will be performed by the coroner’s office, which is normal when a relatively young and healthy person dies unexpectedly and alone.

On Tuesday, July 16, Father Rick was presiding at morning Mass at Our Lady of Guadalupe when he passed out, fell and hit his shoulder and head very hard. The congregation called the EMS. Before the squad arrived, Father Rick revived somewhat and parishioners helped him to the rectory. He insisted he was all right and declined treatment.

Staff and parishioners volunteered to check on Father Rick every 30 minutes throughout the day on Tuesday, and he cooperated with their kind efforts.

On Wednesday and Thursday, staff and parishioners commented that Father Rick did not seem to be tracking well and his color was not good. They encouraged him to get checked out, but Father Rick said he would be alright. 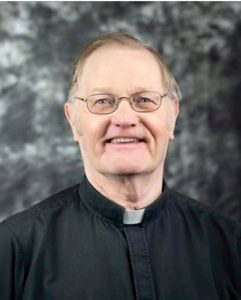