Film explores work of religious in New Orleans after Katrina

CINCINNATI – Despite the human tragedies, loss of life, and the destruction of residential and ministry facilities caused by Hurricane Katrina the Catholic sisters of New Orleans chose to remain in the city where their congregations had ministered for as long as three centuries. 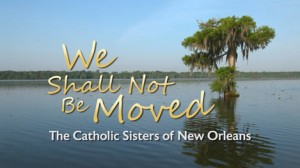 Their stories are documented in the new hour-long documentary, “We Shall Not Be Moved: The Catholic Sisters of New Orleans,” which is available to ABC stations throughout the country Sept. 23 – Nov. 18.

Interfaith Broadcasting Commission, which provides quarterly specials to the major networks, is presenting this program as the first of four faith-based stand-alone films in ABC’s “Vision and Values” series for this new broadcast season. The film will be distributed to stations on Sept. 23 and already 138 stations have scheduled broadcasts at varying times and dates.   The film relates the motivations, struggles, soul-searching and decisions that six congregations made in the face of the destruction wrought by Katrina, which made landfall on Aug. 29, 2005.

“This analysis elevates the program from the level of a ‘Katrina brick-and-mortar rebuilding chronicle’ to a complex and fascinating journey with religious women who faced an uncertain personal and public future,” said Sister of St. Francis of Sylvania Judith Ann Zielinski, the film’s writer and producer for New Group Media. “Their choices were not uniform, simple, or immediate; ultimately, however, all six congregations, with an average of 175 years of combined service to New Orleans, re-confirmed their commitment to the city and its people,” she added.

The program uses archival photos and materials, television footage of Katrina and the flood, extensive and poignant interviews with sisters from each of the congregations. Music is performed by New Orleans Gospel choirs.

Jim Kelly, former co-president of Catholic Charities, New Orleans, takes viewers on a tour of the areas of New Orleans deluged by water from breached flood walls. He also offers his insights into the role of women religious within the history of New Orleans.

The film relates how these six congregations of sisters lost more than convents, chapel, cars and motherhouses. They also lost ministries – high schools, child development centers, community centers and a nursing home for the elderly at which 17 patients died while awaiting rescue. The film shows how each congregation faced the seemingly insurmountable challenge of gaining the necessary funds and overcoming other obstacles to repair or rebuild their facilities. Some of these funds came from the most unexpected sources, one being King Abdullah of Saudi Arabia.

SC Ministry Foundation became involved in providing support and grants to Catholic Sisters in New Orleans beginning in the fall of 2005.  It catalyzed the LCWR (Leadership Conference of Women Religious) and FADICA (Foundations and Donors Interested in Catholic Activities) to create the New Orleans Recovery Project in the fall of 2006.

“The Assembly of Catholic Foundations met in New Orleans in March 2010 and heard the stories of the hope and resilience of these Sisters,” said Sister Sally Duffy, SC. “They all agreed these stories need to be told publicly.”  The film project was born.  The SC Ministry Foundation raised the funds and hired the production company and supervised the project.

“I have had the privilege of witnessing the faith, hope, and love of these women religious in New Orleans since 2005,” said Sister Sally Duffy, SC. “These prophetic sisters transformed the destruction and devastation through the power of the Spirit and through the abiding presence of Christ. They rebuilt high schools, childcare development centers, community centers and motherhouses, in some cases starting from nothing. In other cases, they began programs that responded to the needs they saw around them after Hurricane Katrina.”

Film explores work of religious in New Orleans after Katrina 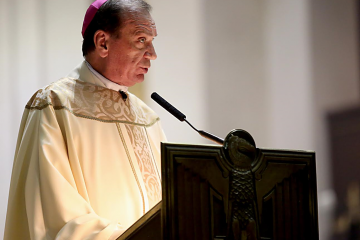