Follow Jesus’ Way of the Cross through works of mercy, pope says

KRAKOW, Poland (CNS) — By embracing the hunger, thirst and loneliness of others, young people can touch Jesus’ cross and experience the light of the resurrection, Pope Francis said.

It was Jesus who chose to identify with people who suffer pain and anguish, especially those fleeing violence and persecution, by “agreeing to tread the way of sorrows that led to Calvary,” the pope told young men and women July 29 participating in the Way of the Cross at World Youth Day in Krakow.

The reflection on Jesus’ passion and death capped an emotional day that included a visit to the Auschwitz concentration camp and a stop at children’s hospital in Krakow before his arrival at Blonia Park. Police stood shoulder-to-shoulder at some crossing points into the park and would not let people pass, sending them to other entry points on the grounds. Thousands of people still were streaming to the service from the crowded streets 30 minutes into the service.

Dancers, acrobats, painters and other artists performed interpretations of each key moment leading up to Christ’s crucifixion, death and burial.

Each significant event of Jesus’ crucifixion was linked to a corporal or spiritual work of mercy. A group of mimes dressed and painted completely in white acted out Simon of Cyrene helping Jesus carry his cross, while wall climbers seemed to stumble as they climbed and formed a cross on the wall, representing Jesus falling for the first time.

The first station — Jesus sentenced to death — related to sheltering the homeless and refugees who share in that same suffering through humanity’s indifference. About two dozen young people from the Sant’Egidio Community from Italy, Argentina, Ukraine and Pakistan carried a wooden cross to the first station. They were accompanied by two formerly homeless Poles and a couple who fled the war in Syria.

“In the last few years, you have been sentenced to death in the persons of 30,000 refugees. Sentenced — by whom? Who will agree with this sentence?” a young woman prayed at the first station.

Following the Stations of the Cross, Pope Francis, who had watched from the stage, began his address by welcoming the Syrian refugees “with fraternal affection and friendship.”

“By embracing the wood of the cross, Jesus embraced the nakedness, the hunger and thirst, the loneliness, pain and death of men and women of all times. Tonight, Jesus — and we with him — embrace with particular love our brothers and sisters from Syria who have fled from the war,” he said.

The pope said that suffering of refugees, the sick, and exploited children could often lead to questioning God’s presence. While those questions “humanely speaking have no answer,” Christ does have an answer.

“Jesus’ answer is this: ‘God is in them.’ Jesus is in them; he suffers in them and deeply identifies with each of them,” he said.

The pope emphasized the importance of both corporal and spiritual works of mercy, which can bring young people to touch Christ’s “sacred flesh” and determine whether they’re Christians.

“In welcoming the outcast who suffer physically and welcoming sinners who suffer spiritually, our credibility as Christians is at stake. Not (just) in ideas,” he said.

“Humanity today needs men and women, and especially young people like yourselves, who do not wish to live their lives ‘halfway,’ young people ready to spend their lives freely in service to those of their brothers and sisters who are poorest and most vulnerable, in imitation of Christ, who gave himself completely for our salvation,” he said.

Pope Francis called on all young people to be at the forefront of serving others, a path of “personal commitment and self-sacrifice” that “is the Way of the Cross.”

Not far from the stage, a group of about 200 Iraqis waved flags of their homeland. Raega Teresa, a member of Ascension Parish in Baghdad, told Catholic News Service the effort of getting so many Iraqis — including some from Kurdistan — to Poland was worthwhile.

“Meeting the pope will strengthen our faith in God,” said Teresa, a member of the Catholic Youth Committee of Iraq. “We can take this faith to Iraq and to other people there and strengthen all and pray for all.”

She said the group was inspired by Chaldean Archbishop Bashar Warda of Irbil, who also traveled to Krakow. “He gives us strength for our faith in spite of all the bad circumstances,” she said.

In a neighboring section, a contingent from Portugal wore stark white T-shirts with the message “Syria: Peace is possible” emblazoned on the front in English and on the back in Portuguese. The T-shirts bore the logo of Caritas Internationalis, the Catholic Church’s international relief and development agency.

“We wanted to send a message to the pope that we listen to him in seeking peace in Syria,” said Rute Tavares, 17, of Lisbon, one of the about 15 people seated on yellow plastic sheeting to protect them from the wet ground.

“We want him to know that young people can make a difference,” she said. “We want to be together with youth all around the world, but especially those who are suffering.”

Contributing to this story was Dennis Sadowski.

Pro-life Democrats have message for party: 'Bring us into your big tent'

Follow Jesus’ Way of the Cross through works of mercy, pope says

A picture says a thousand words: Statewide Day of Adoration for Vocations 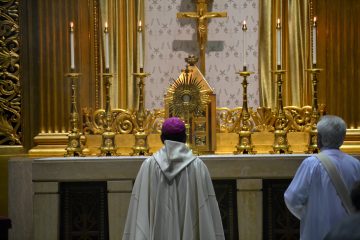