Three Mothers of Priests from the Northern Archdiocese Share their Stories

In northern Mercer County, nestled in a rural region of rich farmland, a different kind of fruitfulness has flourished. The Coldwater Cluster of Parishes, comprised of St. Mary, St. Anthony and Holy Trinity Churches, has produced an abundance of vocations. Within the last five years, Coldwater- area natives Father Peter Langenkamp, Father Jarred Kohn and Deacon Aaron Hess (who will be ordained to the priesthood on May 15) have answered God’s call to priesthood.

For those called to be mothers, a vocation that the Blessed Mary willfully and dutifully accepted, the influence they have on their children’s faith cannot be understated. Some of those children grow up and carry their faith into marriage and family, others like Father Peter, Father Jarred and Deacon Aaron, those children grow into religious vocations.

“The faith has always been very important to me. When I got married and started a family, I knew I wanted to make that the focus” said Patricia Langenkamp, mother of Father Peter Langenkamp, the oldest of her 11 children. “Praying with your children is so important,” she added. “I taught Peter his first prayer when he was just two-years-old, and continually added in new ones.”

Connie Kohn, mother of Father Jarred Kohn, admits their family prayer life wasn’t always perfect. “You have to find ways, even when you are busy, to make time for prayer before meals, when traveling and even when on vacation. When you show your children that it is a priority, it becomes more important to them, too.”

Once when Jarred was on the high school wrestling team, they were out of town for a long weekend invitational. “He had to wrestle on Sunday. So I researched the area and found an early morning Mass that we could attend before he had to report to the gymnasium. Before I knew it, most of the wrestlers and their parents had decided to attend with us and it became a really beautiful moment of faith solidarity,” said Connie.

“Praying as a family allowed me to learn so much about each of my children” said Marjorie Hess, mother of Deacon Aaron Hess. “When we would pray together, I would encourage them to thank God for something good that happened or ask Him for help in a certain situation. I would hear them pray for someone who was teased at school or give thanks for a good test grade. It really opened the doors into their lives and allowed us to grow stronger as a family.”

Another commonality between these mothers is their passion for religious education. Both Patricia and Marjorie taught CCD, as did Connie’s husband, Gerry. While not every parent may have the time or means to teach in the same capacity, they all agreed that practicing religious education in the home can have a lasting and meaningful effect.

“I feel it should be the parent’s responsibility to teach the faith at home first, then the formal CCD classes become an extension of that teaching,”said Marjorie. “But you cannot pass on what you don’t know,” added Patricia. “So I encourage parents to go on the journey with their children and use online resources to support learning where needed.”

Patricia, Marjorie and Connie all recognize the importance of a solid faith foundation.

“As your children grow older, perhaps leave for college, and begin making decisions for themselves, you hope that the values you put in place continue. You pray they don’t begin skipping Sunday Mass or making bad decisions. You pray you’ve done a good job,” Connie said.

THEIR SONS’ PATHS TO PRIESTHOOD

But a similar foundation doesn’t necessarily pave way for a similar journey. When Father Kohn was in high school, he didn’t have aspirations to pursue his college education. He entered the workforce as a welder and performed those duties for a year before announcing his decision to enter the seminary. Connie said his decision caught her off guard but he had already been discerning his path for some time and seeking pastoral guidance.

“I always knew he had a strong faith, but he had never spoken of entering the priesthood. It was a shock, and a lot to process, but now, seeing his transformation has been so rewarding. He’s truly where he was meant to be!”

Marjorie admitted that Deacon Hess announcement was unexpected too, but now when she looks back, she can see the signs that foretold his eventual journey to priesthood.
“Between Aaron’s junior and senior year we began going on college visits. He is very intelligent and was considering a degree in physics. One night, he came to us very late and told us about an experience he had in church that ultimately led to his decision to enter the seminary. Talk about not sleeping that night!”

Patricia always made a point of letting her children know priests and nuns are people too, by inviting them over for family dinners.

“I had considered a religious vocation before I got married, so I always let the children know it was an option. But when Peter went to college at Ohio Northern and majored in Mechanical Engineering, I never assumed he was still considering that option for himself. Now I also have two daughters discerning a consecrated life!”

Being a mother is both an honor and a tremendous responsibility. Patricia, Marjorie and Connie have shown that the journey may not always be easy, but the reward of seeing your child grow into the person God chose them to be is the most precious gift of all. 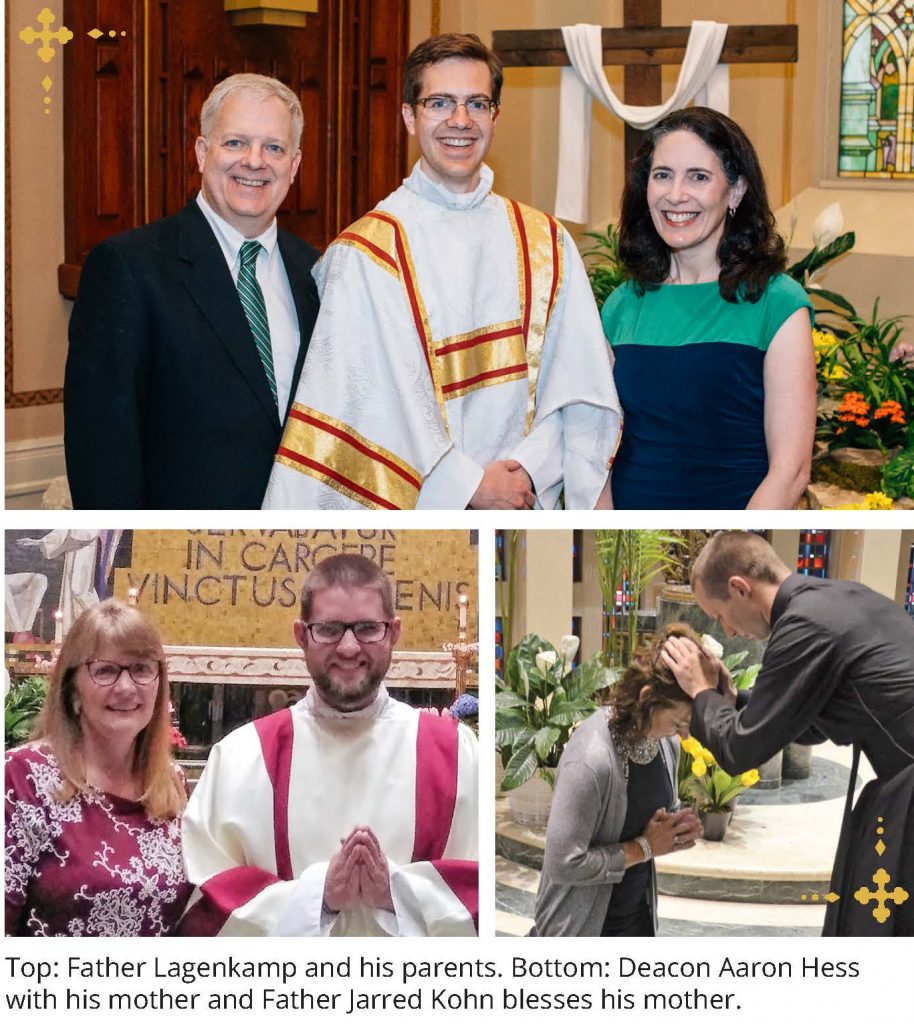