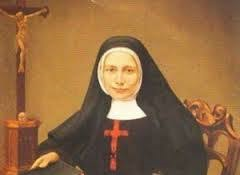 Only one diocesan inquiry for sainthood has happened in the Archdiocese of Cincinnati.

Blessed Frances Schervier (1819-1876), the European-born founder of a new Franciscan community, lived a life of holiness and service. In 1844, she became a secular Franciscan. The next year, she and four companions established a religious community devoted to caring for the poor. In 1851, the Sisters of the Poor of St. Francis were approved by the local bishop in Aachen, Germany. The first U.S. foundation was established in 1858, through the efforts of Sarah Peters. The congregation in the United States, Brazil, Italy, Senegal and the Philippines is known as the Franciscan Sisters of the Poor, while the congregation that includes Germany and Belgium is still known by the original name. Although governed separately by their respective major superiors, the two congregations are twinned in prayer and cooperated to pursue both the beatification of their founder and the current cause for her sainthood.

Blessed Frances was beatified on April 28, 1974. Thirty-five years later, on April 17, 2009, the opening session of the diocesan inquiry for her cause for canonization was celebrated at St. Clare Convent Chapel. Archbishop Daniel E. Pilarczyk presided. Among those in attendance was Franciscan Sister Mary Jacinta Doyle, who was named vice-postulator — the liaison between the archdiocese and the Vatican.

The alleged miracle attributed to Blessed Frances occurred in March of 1989, when Tom Siemers was healed from a massive brain hemorrhage. Siemers’ family members were initially informed that his neurological condition would be fatal. During his illness, Siemers’ wife, Susan, found an image of Blessed Frances given to her years before by a neighbor, Dorothy Connelly, with a healing prayer printed on the back. Susan Siemers put the prayer in a drawer, only finding it again when her husband was hospitalized. She felt prompted to pray the novena and asked for the intercession of Blessed Frances. Shortly thereafter, her husband’s condition began to improve; he woke from his coma and recognized his wife. Ten days later, Tom Siemers, who was able to walk and feed himself, was transferred to a rehabilitation ward. Siemers eventually became fully independent and healthy. He passed away in 2014.

In June 2010, the postulator for this cause, Franciscan Father Gianni Califano, based in Rome, informed the Franciscan Sisters that the Decree of Validity had been granted in the cause for canonization of Blessed Frances. This decree signifies that all of the required documents related to the cause were received and considered complete. In 2016, under the mandate of Pope Francis, new Regulations for the Medical Board of the Congregation for the Causes of Saints were approved. The process for approving a miracle in a cause for sainthood is now more stringent. The changes are intended to ensure a clear trail regarding financial expenditures on the cause and specifically identifying who pays which expenses.

“This year, Archbishop Giovanni Angelo Becciu was appointed at the Vatican as the prefect of the Congregation for the Causes of Saints. We received an email about this appointment in July. and Father Becciu took office on Sept. 1,” Sister Mary Jacinta said. “Basically, the last committee meeting should happen soon and that will lead to either a termination of the process or an approval for sainthood. If the cause is approved, a date for the 2019 canonization of Mother Schervier will be set,” said Sister Mary Jacinta said.

The cause for sainthood for Blessed Frances was Sister Mary Jacinta’s encounter with the process. The details needed and the parameters of information required were beyond imagination. Over 2,000 pages were assembled and all the paperwork was to be provided on specially sized paper with seals or signatures often required for specific pages. Sister Jacinta had to type 257 pages of hand written medical documents that did not show up as readable documents in their original form. Despite the enormous time investment by Sister Mary Jacinta and others in her community or involved with the cause, she said she found the endeavor inspiring and worthwhile.

While the details of Siemers’ miraculous healing move her deeply, and her hand delivery of the documents to the prefect in Rome was intensely memorable, she said that her relationship with Blessed Frances herself is the most precious of the entire multi-year process.

“I have gotten so close to Mother Frances and my relationship with her has been the greatest experience,” she said.

For more information about the steps on the path to sainthood, visit: http://www.usccb.org/about/public-affairs/backgrounders/saints-backgrounder.cfm

Custom of dressing up for Halloween 'devotional in spirit,' says bishop