Archbishop Jose Gomez of Los Angeles condemned violence and racism on Sunday and called for peaceful protests. The leader of the country’s largest Catholic diocese and the president of the U.S. bishops’ conference addressed the weekend’s violence and civil unrest, both in his Pentecost homily and in a statement released by the USCCB.

“When God looks at us, he sees beyond the color of our skin, or the countries where we come from, or the language that we speak. God sees only his children — beloved sons, beloved daughters,” said Gomez in his homily, delivered on Sunday at the Cathedral of Our Lady of the Angels.

Addressing a week of protests and violence following the death of George Floyd, a black man killed by a police officer in Minneapolis on May 25, the archbishop said that there are “millions of our brothers and sisters who are still forced to suffer humiliation, indignity, and unequal opportunity just because of their race or the color of their skin,” and that “it should not be this way in America.”

Gomez added that “racism is a sin,” and one that “denies what God wants for the human person.”

“But the way forward for us is love, not hate and not violence. Nothing is gained by violence and so much is lost,” said Gomez, referring to the numerous protests throughout the country, some of which descended into rioting and looting. Gomez said that the Gospel proclaimed a message of peace.

“Today more than ever, we need a spirit of peacemaking and searching for nonviolent solutions to our problems,” said Gomez.

Later on Sunday, Gomez released a statement from his office as president of the United States Conference of Catholic Bishops, echoing many of the points he made in his homily.

“On behalf of my brother bishops, I share the outrage of the black community and those who stand with them in Minneapolis, Los Angeles, and across the country,” said Gomez in the statement.

The archbishop said that the killing of George Floyd was “senseless and brutal, a sin that cries out to heaven for justice.”

“How is it possible that in America, a black man’s life can be taken from him while calls for help are not answered, and his killing is recorded as it happens?” asked Gomez. While saying he is praying for Floyd’s family and loved ones, Gomez said civil authorities must bring justice to those responsible for his death.

As for the protests, Gomez said that these “reflect the justified frustration and anger of millions of our brothers and sisters who even today experience humiliation, indignity, and unequal opportunity only because of their race or the color of their skin.”

“It should not be this way in America. Racism has been tolerated for far too long in our way of life,” he added.

The archbishop condemned how some “legitimate protests” have been “exploited by persons who have different values and agendas.”

“Burning and looting communities, ruining the livelihoods of our neighbors, does not advance the cause of racial equality and human dignity,” he said, adding that “we should not let it be said that George Floyd died for no reason.”

“We should honor the sacrifice of his life by removing racism and hate from our hearts and renewing our commitment to fulfill our nation’s sacred promise–to be a beloved community of life, liberty, and equality for all.”

Today's Video: I'm a bit racist. And so are you. 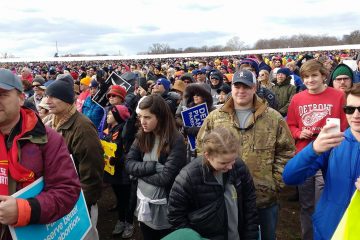