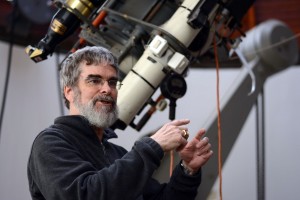 The Athenauem of Ohio presents Brother Guy Consolmagno, S.J., Director of the Vatican Observatory, to speak on “God’s Mechanics: The Religious Life of Techies” on Wednesday, February 8 at 7:30 p.m. in the Bartlett Pastoral Center at the Athenaeum of Ohio.

How does religion work in a society shaped by science and technology? How do scientists and engineers practice their religions? How in particular does a Jesuit brother, and an MIT graduate with a PhD in planetary science, make sense of his Catholicism? God’s Mechanics examines the personal religious life and theology of scientists and engineers — “Techies” — based on conversations with Techies in California’s Silicon Valley and a first-person confession from a Jesuit scientist and astronomer at the Vatican Observatory.

A native of Detroit, Br. Guy earned undergraduate and masters’ degrees from MIT, and a Ph.D. in Planetary Science from the University of Arizona. He was a postdoctoral research fellow at Harvard and MIT before entering the Society of Jesus in 1989.

He has worked at the Vatican Observatory since 1993. There his research has explored connections between meteorites, asteroids, and the evolution of small solar system bodies. Along with more than 200 scientific publications, he is the author of a number of popular books including Would You Baptize an Extraterrestrial? (co-authored with Father Paul Mueller, S.J.).

The talk is free and open to the public. Seating is limited. Bartlett Pastoral Center – Athenaeum of Ohio, 6616 Beechmont Avenue, Cincinnati, Ohio 45230.