The Catholic Telegraph 2010-11-30
The Catholic Telegraph / November 30, 2010 / 1.1k
0
Shares
Facebook Twitter Pinterest WhatsApp
Nov. 30, 2010
By Mary Caffrey Knapke
SIDNEY DEANERY — “There’s no such thing as coincidence. That’s what my experience has been with Schoenstatt. It’s an interesting feeling of being led.”
Curtis Kneblik recently explained the series of experiences that culminated in the construction of a Schoenstatt Wayside Shrine at the Transfiguration Center for Spiritual Renewal in Ludlow Falls, where he serves as director.
“People start to experience something when they go into a Schoenstatt Shrine,” Kneblik said, describing the three graces associated with this movement: a feeling of coming home, inner transformation or self discovery, and an apostolic zeal to share the Schoenstatt spirituality. “The essence of Schoenstatt is this idea of giving your heart to Mary, and in exchange, she gives herself to you. So you prove your love to her by the things you do. In exchange, she comes and dwells in your midst and forms you into the image of her Son.”
The Schoenstatt Movement began in Germany in 1914. While speaking to a group of seminarians, Father Joseph Kentenich asked the Blessed Mother to come and make the shrine her home. In exchange, the seminarians dedicated their lives to her. Today, nearly 200 replica or “daughter” shrines exist around the world.

Kneblik himself first visited a Schoenstatt Shrine while in Minnesota with a traveling retreat ministry team. The memories of that experience stayed with him for two decades, but its meaning truly took hold after he began working at the Transfiguration Center in 2004. He was once again exposed to Schoenstatt through the group at Transfiguration Parish; then, while on a family trip in Madison, Wis., he remembered a Schoenstatt Shrine was located there and decided to stop by.
During that visit, “there were a lot of things that started coming together for me,” he said. He had been wanting to build some kind of shrine or chapel on the grounds of the Transfiguration Center for some time. Soon, the construction of the Schoenstatt Wayside Shrine was set into motion. While it was not feasible to erect a “daughter shrine” on the site, boxwoods were planted to indicate where the walls would be located in an exact replica. The original shrine is also mimicked in the shape of the wayside shrine itself, with its pitched roof, cupola and bell. Another key symbol of the movement is the painting “Mother Thrice Admirable Madonna or Refuge of Sinners Madonna” by Luigi Crosio. This image is also featured on the wayside shrine.
Another element of the local shrine is stonework completed by local artisan Mark Condy. Originally from Scotland, Condy regularly visits the center and stops to talk with Kneblik about a variety of religious and spiritual topics.
“About two months ago, Mark and I were walking the grounds and I was telling him about our Schoenstatt Marian Shrine that was in the development stages. As we looked over the project, I learned that his father is a stone mason in Scotland and that he had worked with him for a number of years. Well, one thing led to another,” Kneblik said. “Mark took on this job voluntarily to help us create this sacred space.”
Condy became a Christian at a Billy Graham rally in 1989 and eventually earned a master’s degree in religious communication from United Theological Seminary in Dayton. He has worked as associate minister at an area church, where he introduced some “more traditional spiritual practices,” such as Stations of the Cross. He said installing the stonework around the Schoenstatt Shrine was a time of prayer.
“I can’t really put words to it, but I do feel at home at the shrine. I feel drawn to it; I feel comfortable there. While I was working on the path, I could feel God’s presence with me.” The wayside shrine was blessed by Transfiguration’s pastor, Father John MacQuarrie, on Oct. 18. Condy then began making preparations to travel to the Schoenstatt Shrine in Waukesha, Wis., with a group from the parish.
Condy said of the project that “God initiated this. It was nothing of my doing; it was just out of the blue. I felt God’s intervention. I didn’t know Curtis was needing stonework done. So I’m trying to let things unfold as He wants and not what I want.”
Perhaps Condy’s story is one that embodies Kneblik’s hopes that “when people visit the shrine, they’ll feel at home. Secondly, my hope would be that Mary educates them when they come to visit — gives them this sense of inner transformation and wanting to grow in their faith,” Kneblik said. “And I hope that after they come here, they have a newfound zeal. The same three graces of any shrine is my hope for the shrine here.”
Mary Caffrey Knapke can be reached at [email protected]
Previous post

The Catholic Moment: The prophetess Anna as a model for Advent 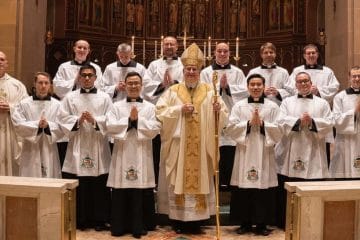