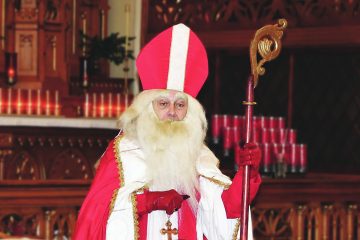 The Catholic Telegraph 2010-12-15
The Catholic Telegraph / December 15, 2010 / 1.8k
0
Shares
Facebook Twitter Pinterest WhatsApp
Wednesday, December 15, 2010
By David Eck
CATHEDRAL DEANERY — Parishioners and visitors to Holy Cross-Immaculata Parish closed the community’s 150th anniversary Dec. 12 with a Mass that celebrated the faith community’s rich history and traditions.
A snowy morning lowered attendance, but more than 300 people filled the church on Mount Adams in Cincinnati for the Mass celebrated by Cincinnati Archbishop Dennis M. Schnurr. Fathers Martin Moran, pastor, and Stanley H. Neiheisel, a former pastor, concelebrated.
In his homily, Archbishop Schnurr told of the late Archbishop John Baptist Purcell’s personal interest in establishing the parish. Archbishop Purcell promised God that he would build a church on the highest hill in Cincinnati to honor the Blessed Virgin Mary if he survived a terrible storm at sea. Archbishop Purcell donated the land for the church and oversaw its construction.
Sometimes called the “archbishop’s church,” Holy Cross-Immaculata is best known for the thousands of pilgrims that climb and pray the steps leading up to the church each Good Friday.
“The responsibility for carrying out this mission to establish a parish on Mount Adams was undoubtedly marked by exhaustion and discouragement, but the faith of the people was even stronger,” Archbishop Schnurr said.
“During construction of Immaculata Church, Archbishop Purcell had a large wooden cross erected on the site. Catholics flocked to the cross, prayed for the completion of Immaculata and wore a path up the hill.
“To ease their journey, Archbishop Purcell built wooden steps in 1860,” Archbishop Schnurr continued. “When Immaculata was completed, people continued to use the wooden steps and began praying as they ascended. This, of course, is the beautiful tradition that continues to this very day.”
The first Mass at Immaculata Church was celebrated on Dec. 9, 1860 by Father George Brunner, the first pastor. Archbishop Purcell spoke at the Mass, said James Steiner, a parishioner who recently published a book on the parish’s history (Click here for related story).
The Passionist order of priests came to Mount Adams in 1871 to minister at the predominately German parish. They would remain at Immaculata until 1996, when Father Neiheisel was appointed pastor. The Passionists established Holy Cross Monastery and Church in 1873 to serve the Irish Catholics on the hill.
The Sisters of Charity arrived in 1877 to teach at Immaculata School and also staffed Holy Cross School when it opened in 1888. They operated Holy Cross Commercial High School from its founding in 1904 until it closed in 1927, and Immaculata Commercial High School from 1946 until it closed in 1959. Immaculata School closed in 1946 and Holy Cross School closed in 1976. Last September Holy Cross-Immaculata Parish recognized the Sisters’ years of ministry in Mount Adams by dedicating a statue of St. Elizabeth Ann Seton, the order’s foundress, on the parish grounds.
In 1970, Holy Cross and Immaculata parishes merged and moved into the Immaculata building. Several fixtures from Holy Cross Church remain at Holy Cross-Immaculata, including a statue of St. Patrick that for years has been featured in Cincinnati’s St. Patrick’s Day Parade. A grotto from Holy Cross is also installed in the current church.
“Certainly on this anniversary we give thanks to God for the strength of character of those who have gone before us, but we also thank God for the many wonderful things that go on in this parish today and we pray to God that He continues to bless this community,” Archbishop Schnurr said during the Mass. “All of that comes together in this anniversary celebration. Today we give thanks to God for all He has accomplished through this parish.”
With the theme “Honor our past, cherish our future, inspire our present,” the parish held several events during a 16-month anniversary celebration. They included a historical sites tours, an evening at Cincinnati Playhouse in the Park, concerts and a wine-and-cheese party. A special 150th logo was used on banners and publications.
Area businesses and non-Catholics shared in the anniversary, and local businesses contributed to the restoration of the church’s bells, Father Moran said.
“It’s such a strong relationship,” he said. “Mount Adams draws so many different types [of people] for so many reasons. One is the faith.”
With its history, beauty and prominent location overlooking Cincinnati, Holy Cross-Immaculata draws parishioners from throughout Cincinnati. Its 559 families come from nearly 60 different zip codes. The church is also popular for weddings and hosts people of all faiths daily, Father Moran said.
“We have many people [who] bring their friends to visit,” he explained. “What we really like is the tradition that it’s always been a house of prayer. We have so many people who come to pray each day.”
Father Neiheisel said serving as pastor at Holy Cross-Immaculata was a favorite assignment of his priesthood. He recalled the beauty of the procession of people praying the steps beginning at midnight every Good Friday.
“It’s a beautiful place to be and a beautiful people up here. I just loved it here,” Father Neiheisel said. “This place was dear to my heart.”
Steiner joined the parish in 1999 after he and his wife, Janet, moved to Mount Adams from the suburbs. The parish is appealing because it maintains a personal feel, he said.
“It’s a family,” Steiner explained. “I think the thing that strikes me is how many people are second – and third-generation members of the parish. It’s a wonderful parish from a historical perspective. It has a simple beauty to it.”
Beverly Siefke, who attends Sunday Mass at Holy Cross-Immaculata, appreciates the atmosphere there.
“You can just feel the joy and happiness, and I think it’s a very exciting time for the church,” she said. “You can feel the dedication when you walk in the door. It’s just always a joyful place, and you can tell people put a lot of time and energy in it.”
David Eck can be reached at [email protected].
Tags:Immaculata Holy Cross 150th anniversary
Previous post

The Catholic Moment: Duc in altum

Ministry at Birthright a blessing for those who serve there