It’s that time of year again: election season. As citizens of this country, we are called to participate. As Catholics, our faith calls us to not just participate by casting a vote, but to do so in a manner that is consistent with the mission of Jesus. The problem is, many Catholics don’t actually know what the Church teaches about the dignity of every human person, the dignity of life, caring for the poor and the earth, the importance of family and community, the value of work and the rights of workers.

Regardless of where we stand – or lean – we’re all faced with the same timeless question as the 2020 presidential election quickly approaches: Who do i vote for?

It’s not a question that your husband or wife, parent, pastor or anyone else can answer for you. As stated in  Forming-consciences-for-faithful-citizenship, a document from the United States Conference of Catholic Bishops (USCCB), “The responsibility to make choices in political life rests with each individual in light of a properly formed conscience.”

So how does one properly form his or her conscience and vote with confidence? By reading the papal, conciliar and episcopal documents on the Church’s social teaching. While these are deep and rich, many of us do not have the time to dive into Gaudium et Spes, “Statement on Capital Punishment,” “Called to Compassion and Responsibility,” or any of the other 50-plus foundational documents — and thanks to the Archdiocese of Cincinnati’s new initiative, iVoteCatholic, you don’t have to.

The goal of iVoteCatholic is to equip archdiocesan pastors, parish leaders, and educators with the resources they need to help their parishioners and students get a fuller picture of Catholic social teaching and form good consciences, not only for the November election but also for life. The hope is that with a better understanding of what the Church teaches and why, people will apply these teachings to their lives, thoughtfully evaluate candidates during elections and vote with their faith in mind.

“Instead of people voting Republican or Democrat, we want people to vote Catholic,” said Andrew Musgrave, director for Catholic Social Action and point-person for the initiative, “And that doesn’t mean voting for Catholics. That doesn’t mean only voting for people who line up with one particular issue in the Catholic Church. You’re never going to find someone who lives by the Catechism and always abides by every teaching of the Church, but who do you find best embodies, best lives out, best leads from the fullness of the Catholic position? It’s a discernment process.”

To assist in that discernment process, Musgrave and the iVoteCatholic initiative team, consisting of Jeremy Helmes, director for Divine Worship and Sacraments; Bob Wurzelbacher, director for Respect Life Ministries; six members of the Catholic Social Action Office; and Maddie Lees, parish outreach coordinator for Catholic Charities Southwestern Ohio (CCSWO) examined the seven themes of Catholic social teaching and paired them with the seven Sundays preceding this year’s election, with the exception of November 1, All Saints Day:

• September 13: Call to Family, Community, and Participation
• September 20: The Dignity of Work and the Rights of Workers
• September 27: Option for the Poor and Vulnerable
• October 4: Life and Dignity of the Human Person
• October 11: Solidarity
• October 18: Rights & Responsibilities
• October 25: Care for God’s Creation

They then compiled and created dozens of digital resources for each of those weeks, housing them on iVoteCatholic.org, which rolled out to every parish, Catholic school and Catholic community in the archdiocese at the beginning of August.

During the past few weeks, each of these institutions has been combing through those resources and finding ways to utilize the materials in their respective pastoral ministries between September 13 and October 25. Materials include explanations of each theme, prayers, videos, homily helps, social media posts, bulletin articles, discussion guides for small groups, musical suggestions, activities for kids, lesson plans, papal statements and more.

The ideal scenario is that every Catholic community – school, parish, religious order – would overlay all of their activities during each of those seven weeks with a community-wide focus on the Catholic social teaching themes.

“We want the whole parish to focus on one of those themes,” said Helmes, “not just on Sunday morning, not just in the hymns or the homily or the readings, but also when kids are going to religious ed class, and what [they] put on social media, in [the] bulletin, what the small faith sharing group is doing, what the Bible study is doing. The whole parish is going to be focused that week on, ‘What does the Church actually teach us? What does the Gospel actually offer us about this theme that is truly Catholic?’”

Helmes said that because the Church does not align herself with political parties, some pastoral leaders tend to shy away from social and political issues. He hopes this initiative will open up those conversations and inspire parishes and schools to help their communities grapple with urgent political issues and understand more about what the Church actually teaches. Because, in the long run, iVoteCatholic isn’t about the 2020 election.

“It will be really easy to strip off ‘2020’ and the election-focused content,” said Helmes. “It’s really about Catholic social teaching. It’s evergreen content. We’re hoping that this [website] will continue to be a resource.”

The times are calling us to be more engaged in our political lives. We’re not all going to vote the same way, but Musgrave said that by making a concerted effort to learn more about the fullness of our faith and what it means to vote Catholic, we can step forward with peace of mind.

For more details, visit iVoteCatholic.org, and look for information about the seven themes of Catholic social teaching in your community in the coming weeks. 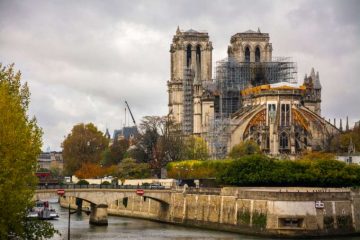