Immaculate Conception is feast of hope for sinners, pope says

VATICAN CITY (CNS) — Mary, conceived without sin, is a "masterpiece" who reflects "the beauty of God who is all love, grace and self-giving," Pope Francis said on the feast of the Immaculate Conception.

Reciting the Angelus prayer with visitors in St. Peter’s Square Dec. 8, Pope Francis focused on the feast day that celebrates how Mary was conceived in the womb of St. Ann without original sin.

Several hours after the noon prayer, the pope joined thousands of people near the Spanish Steps in central Rome to pay homage to the Immaculate Conception at a Marian statue atop a tall column. The statue was erected in 1857 to commemorate Pope Pius IX’s declaration three years earlier of the dogma that Mary was conceived without sin.

Early in the morning each Dec. 8, Rome firefighters using a truck and tall ladder, hang a ring of flowers from the statue’s outstretched arm. Throughout the day, individuals and organizations leave flowers at the base of the statue.

As is his custom, Pope Francis did not read a speech by the statue but recited a prayer he wrote for the occasion.

Nine days before his 83rd birthday, the pope told Mary that "the further we go on in life, the more our gratitude to God increases for having given us sinners a mother like you."

"You, Mother, remind us that yes, we are sinners, but we are no longer slaves to sin," he said.

The pope offered special prayers for everyone in Rome or around the world who feels oppressed, burdened and discouraged by their sins, those "who think that there is no longer hope for them, that their faults are too many and too great and that God certainly has no time to waste on them."

Mary is a mother who "never stops loving her children," he said. And in the darkest night and in the darkest souls, she can reflect the light of Christ, who alone "breaks the chains of evil, liberates from the strongest dependencies, dissolves the most criminal bonds, softens the most hardened hearts."

Earlier, in his address before the Angelus prayer, Pope Francis said that God always wanted Mary to be "full of grace, that is, full of his love."

When the angel Gabriel told Mary that she would bear God’s son, she "didn’t lose herself in all sorts of arguments," Pope Francis said. "She immediately put her whole being and her whole personal story at God’s disposition."

"Corresponding perfectly to God’s plan for her, Mary became the ‘all beautiful,’ ‘all holy,’ but without the slightest shadow of self-satisfaction," the pope said. "She is humble. She is a masterpiece, but remains humble, small, poor. In her is reflected the beauty of God who is all love, grace and self-giving."

Pope Francis prayed that the celebration of the feast of the Immaculate Conception would "help us make our whole lives a ‘yes’ to God, a ‘yes’ comprised of adoration of him and daily gestures of love and service" to those in need.

Friday Night Football in the Archdiocese of Cincinnati

Immaculate Conception is feast of hope for sinners, pope says 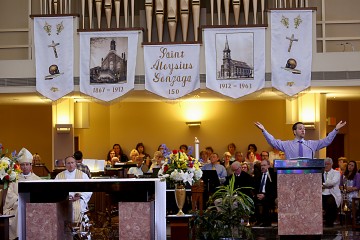