A Mass of Christian Burial for Father Lawrence J. Mick was celebrated Jan. 13 at St. Antoninus Church in Green Township. Archbishop Dennis M. Schnurr presided. Father Mick, 93, died Jan. 9 at Western Hills Retirement Village.
A native of Hamilton, he did his preparatory studies at St. Gregory Seminary, and studied theology at Mount St. Mary’s Seminary of the West. He was ordained on March 12, 1949, by Archbishop John T. McNicholas at Sts. Peter and Paul Church in Norwood.
Father Mick received his first assignment on March 25, 1949, as assistant pastor at St. Lawrence Parish, Price Hill. On Sept. 3, 1949, he was appointed to attend the Pontifical Institute of Sacred Music in Rome for two years. There he received the Licentiate in Gregorian Chant. Effective Aug. 21, 1951, he was appointed assistant to St. Francis de Sales Parish, Walnut Hills, and to teach music at Mount St. Mary’s Seminary. He was appointed instructor of chant at St. Gregory Seminary on June 8, 1954, and prefect of discipline of the High School Department at St. Gregory on Aug. 11, 1958.
He was appointed vice-rector of St. Gregory Seminary, effective June 26, 1967. He became administrator of St. Jerome Parish in Cincinnati while continuing at St. Gregory on June 9, 1970. He was then appointed associate of Guardian Angels Parish, Mt. Washington, on June 8, 1981 while continuing as administrator at St. Jerome Parish. Father Mick was appointed pastor of St. John Parish, Deer Park, on July 15, 1983, where he remained until 1997. He retired on July 1, 1997, but remained active for many years at St. Antoninus.
Father Mick is survived by his sister, Joan, and brothers, Frank and Richard.
Interment was in Gate of Heaven Cemetery in Montgomery.

A Memorial Mass was celebrated Dec. 14 for Sister of Notre Dame de Namur Virginia Lacy. Sister Virginia, 85 died, Dec. 1. She was a Sister of Notre Dame de Namur for 67 years.
Sister Virginia was a native of Dayton. In the archdiocese, Sister Virginia served as principal at St. Francis de Sales in Lebanon and St. James in Dayton. In 1978, she was asked to establish an office of Gerontology for the Ohio Province. She went on to serve as an assistant superintendent of Catholic schools in the northern area of the archdiocese. She moved into pastoral ministry fulltime at St. James in 2000, working with others to form and build St. Benedict the Moor Parish. Sister Virginia later served as assistant to the manager at Hoover Place. She retired in to the Mount Notre Dame Health Center in 2014.
Sister Virginia donated her body to science.

A Mass of Christian Burial was celebrated Dec. 29 for Sister of Charity of Cincinnati Rose Patrice Beck in the motherhouse chapel. Sister Rose Patrice, 82, died Dec. 22 at Mother Margaret Hall. She was a sister of Charity of Cincinnati for 64 years.
A Cleveland native, Sister Patrice spent 41 years in educational ministry. In the archdiocese, she taught at Holy Cross and St. Mary in Cincinnati, and served as principal at St. Brigid in Xenia. She later taught and volunteered in the Cleveland area before moving to Mother Margaret Hall in 2012.
Sister Rose Patrice is survived by her sisters, Susan Sammons, Ethel Karlozi, Janice Hanford, and Barbara Siracuse, and brother, John Beck.
Interment was in the Sisters of Charity cemetery.

A Mass of Christian Burial was celebrated Jan 3 for Sister of Charity of Cincinnati Jeannine Selzer in the motherhouse chapel. Sister Jeannine, 87, died Dec. 26 at Mother Margaret Hall.
She was a Sister of Charity of Cincinnati for 69 years.
In the archdiocese, Sister Jeannine, a Cincinnati, native, served as a teacher at St. Teresa in Springfield; St. Boniface and Resurrection in Cincinnati; and Corpus Christi in Dayton. She served in elementary administration at St. Brigid in Xenia, and St. Mary in Cincinnati, where she was the last Sister of Charity principal. She went on to serve as novice director and director of services at the motherhouse, and directed a renewal program for priests and parishes in the Steubenville Diocese from 1986-1990. In addition, she ministered as a pastoral associate at Good Shepherd Parish in Montgomery.
Sister Jeannine is survived by her sister, Martha. Interment was in the Sisters of Charity cemetery.

A Mass of Christian Burial was celebrated Jan. 4 for Precious Blood Sister Carmencita Voisard at Salem Heights Chapel in Dayton. Sister Carmencita, 94, died Jan. 1 at the Maria-Joseph Center. She was a Sister of the Precious Blood for 79 years.
A native of Houston, Ohio, Sister Carmencita served in educational ministry as both a teacher and principal from 1940-1998. In the archdiocese, she educated children in Dayton, Cincinnati, St. Marys, and McCartyville. She served as supervisor of schools in Denver, and also in a similar capacity for the congregation’s sisters in educational ministry. She also served as generalate councilor. In 1973, she opened and directed the Early Childhood Center in Dayton. She moved to the Maria-Joseph Center in 2011.
Interment was in the Salem Heights Cemetery.

A Mass of Christian Burial was celebrated Jan. 9 for Sister of Charity of Cincinnati Rose Marita Arnold in the motherhouse chapel. Sister Rose Marita, 92, died Jan. 1 at Mother Margaret Hall. She was a Sister of Charity of Cincinnati for 73 years.
In the archdiocese, Sister Rose Marita, a native of Zanesville, taught at St. Boniface and St. Mary in Cincinnati; St. Mary in Greenville; and Corpus Christi in Dayton. As a principal, she served at Cure of Ars in Cincinnati; and St. Albert in Dayton. She later ministered in religious education and pastoral ministry at parishes in Michigan. She returned to the motherhouse in 2003.
Sister Rose Maria is survived by her sister, Lucille McGowan. Interment was in the Sisters of Charity cemetery.

Local priest discusses liturgy in How We Worship 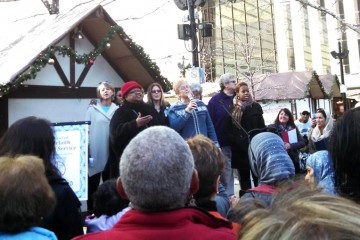