Jubilarians 2018: Franciscan Sisters of the Poor 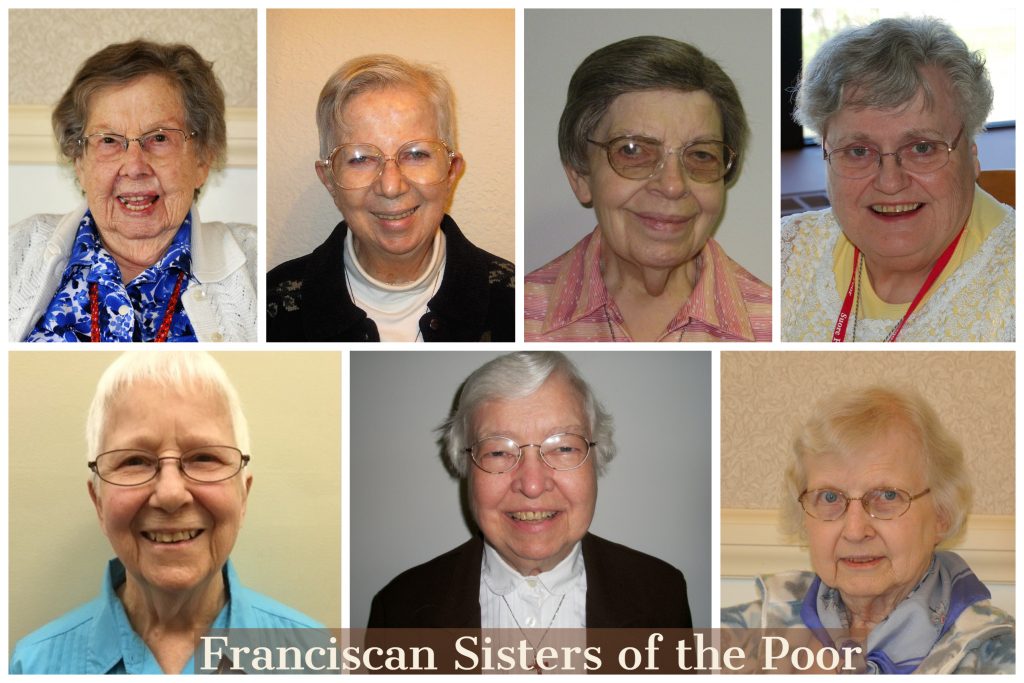 Sr. Marie Clement Edrich, a native of Cincinnati, has had a variety of opportunities, quite diverse to serve God and the SFP Congregation. Initially educated as a Pharmacist, she only spent a few years in our hospitals before she was sent to Rome to study Theology. Thereafter, she worked with young members in the formation process. She returned to Rome to serve in the Area Leadership. With her experience in leadership, she was then asked to serve on the Congregational Leadership Council which surfaced again a few years later. She did return to Italy for a few years before settling back to her native Cincinnati. A big wondrous circle of life!

Those who know her, love her for her kindness, generosity and acceptance of other from where they stand. She loves to reading, enjoys the computer and welcomes all.

Sr. Clarita Frericks celebrates 75 years as a Franciscan Sister of the Poor. Originally from Quincy, Illinois, one of eleven children and the third one to enter SFP Congregation, Sr. Clarita has had a full life, reflective of God’s love and care. Trained as a Radiology Technician she worked in our hospitals as a Radiology Supervisor. It was only in later years, that Sr. Clarita discovered a desire to devote her gifts to meeting the pastoral care needs of patients and residents. Her lifelong attraction to the spiritual life was nurtured and fed in the ministry of the soul. To this day, she continues to be a prayerful presence to those in need, in her faithful written correspondence, her being a greeter at our Sunday Liturgy and being a “praying angel” to those preparing to see God face to face.

A native of Hamilton, Ohio is Sr. Dorothy Ann Bolser who is celebrating 70 years as a Franciscan Sister of the Poor. One of nine children, she holds many childhood memories prior to her entering religious life. Sr. Dorothy Ann was initially ministering in our hospitals, before being sent to study nursing. Thereafter, she spent time in both acute and long term care settings, before becoming a certified chaplain. For several years, she routinely volunteered at St. John Social Service Center which proved to be a meaningful ministry to her and those she served. With a willing spirit, for many she offered her musical skills serving as an organist in a long-term care facility. Sr. Dorothy Ann appreciates her spiritual journey and the discoveries she continues to make over time.

Sr. Mary Louise Jacobs is celebrating her 70th year as a Franciscan Sister of the Poor. She was raised in Hamilton, Ohio, one of six children and the only girl in the family. Over the years, Sr. Mary Louise has been involved with a number of ministries related to our hospitals and social service centers. She has been asked to serve the people of God in diverse roles including fundraising, housekeeping, dietary, sacristan and even assisting in a thrift store! She is the longest resident Sister at St. Clare Convent and knows every nook and cranny! Sr. Mary Louise enjoys the richness of her early years and the memories of many roads traveled.

Sr. Yvonne Fackler, serves the Franciscan Sisters of the Poor as the Sacristan at St. Clare Chapel. This year she celebrates her 60th Jubilee with great joy. Raised in Dayton, Ohio she is one of ten children. Early on, she became a nurse and ministered in several hospitals in the Cincinnati/Dayton area before pursuing pastoral education and becoming a hospital chaplain for some fifteen years. In later years, she was a volunteer at St. Raphael’s Social Service Center in Hamilton. She is known for having a light and good heart. Her smile and laughter are always welcome.

Sr. Norma Meyer comes from “God’s Country” of Fort Loramie, Ohio and this year joyfully celebrates 60 years of being a Franciscan Sister of the Poor. She comes from a family of six siblings and holds many memories of years past. She has spent most of her years in active ministry in nursing, predominately right here in Cincinnati. When she stepped away from nursing, she gave of herself through St. John’s Social Service Center in Over the Rhine. In recent years, she devotes herself to a quiet, prayerful presence that soothes her and other souls. We share our joy with her in this blessed year.

Sr. Bernadette Sullivan who celebrates 60 Years as a Franciscan Sister of the Poor was born in the “Big Apple” of New York City. She entered the Congregation directly after completing her studies in Nursing at Bellevue Hospital. Her early years were spent in the hospital settings prior to her being sent to Rome for theological study. Sr. Bernadette worked with those aspiring to religious life then felt drawn to minister to homeless women in the Northeast.

Thereafter, she was asked by the Sisters to serve the SFP Congregation in leadership positions, first as a Councilor and then as Minister. After leadership, she focused her energies on issues related to peace and justice; becoming a NGO person at the United Nations for several years. She relocated from the Northeast in January, 2017. She is a natural life learner and took up watercolor painting and yoga in her “later years”.

Peacemaking begins at home by saying 'no' to rivalry, pope says at Mass

Jubilarians 2018: Franciscan Sisters of the Poor