Jubilarians 2018: Sisters of the Precious Blood 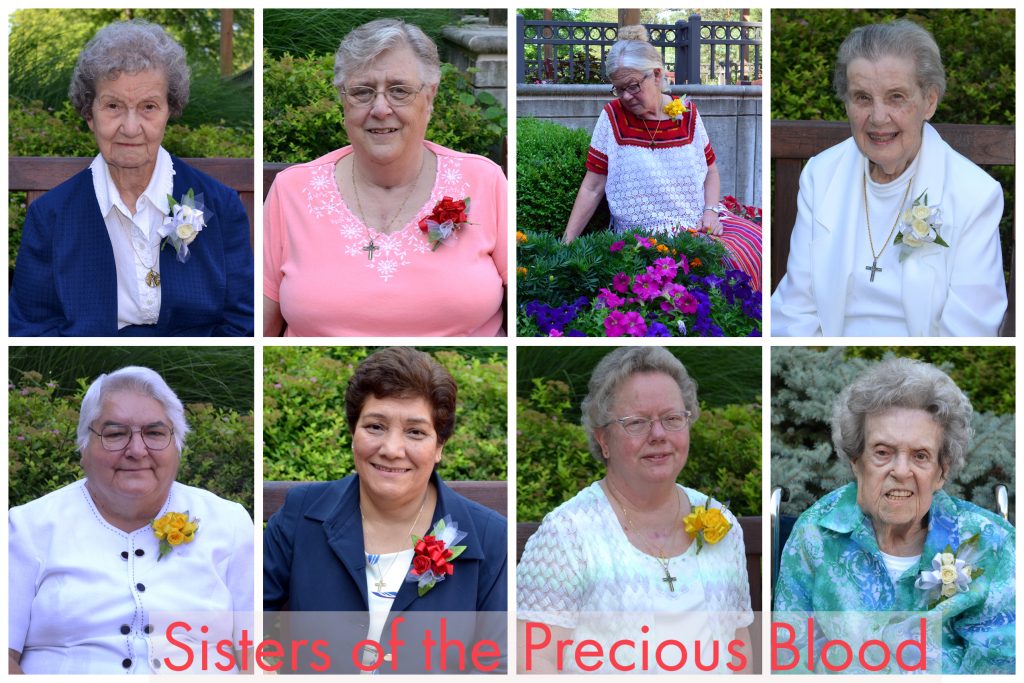 Born in 1925 in Cincinnati, Sister Berenice (M. Edward) Janszen has led a varied and devoted life of ministry, with roles in teaching, pastoral care and chaplaincy.

Sister Berenice’s years of active ministry took her to a variety of locations in Missouri, Ohio, Indiana, Michigan and Kentucky. She continues to serve as volunteer librarian at Salem Heights, the Congregation’s motherhouse.

“I have been so blessed!” said Sister Berenice. “Daily I pray for all those with whom I have journeyed my 92 years and will share life yet to come.”

Sister Kathleen Kelly entered the Precious Blood Congregation after graduating from Regina High School in Norwood, Ohio. She went on to further study and degrees in education and social studies from the University of Dayton; Immaculate Heart College in Los Angeles; the University of Denver; and The Catholic University of America.

In 2012, Sister Kathleen was presented with the first Sister Kathleen Kelly Lifetime Achievement Award, created by Tender Mercies in Cincinnati to recognize an outstanding community partner, employee or volunteer. Sister Kathleen devoted over 25 years in ministry at Tender Mercies, which provides housing and outreach to homeless adults with mental illness in Over-the-Rhine.

In 2014, Sister Kathleen was a recipient of the Outstanding Ohio Nonprofit Volunteer Award. The following year, she retired to Salem Heights, the Congregation’s motherhouse, where she said she has experienced “the love of [my] Sisters in community again and again” as they live the mission of the Sisters of the Precious Blood.

Born in 1927 to William and Katherine Koenig in Wapakoneta, Ohio, Sister Dorothy (M. Angelista) Koenig was the sixth of 10 children. Sister Dorothy said her family had a strong faith upbringing and all the children attended Catholic school, where they admired the Precious Blood teachers. This admiration led her to enter the Congregation in Dayton in 1943 at the age of 16.

Sister Dorothy earned a certificate in food service management from St. Louis University and ministered in food service in many seminaries, a college and the Congregation’s motherhouse. She also spent time as a teacher’s aide, working with first graders. For more than 40 years, she served as a caregiver in home care in Arizona.

“While being a very quiet, reticent individual,” wrote a friend about her, “under this quietness is a person with unlimited potential, understanding, compassion and generosity for others.”

Sister Marifé Hellman serves as director of Holy Mary of the Most Precious Blood School, which serves young Mayan women from rural areas in Guatemala. Originally from Phoenix, Sister Marifé joined the Sisters of the Precious Blood in 1967 and earned degrees from the University of Dayton and the Weston School of Theology (now the Boston College School of Theology and Ministry). She served as a teacher and pastoral and youth minister in Phoenix and in Chile before going to Guatemala in 1989.

In Guatemala, Sister Marifé was a village educator and a university and seminary professor of theology and pastoral ministry before opening Holy Mary of the Most Precious Blood School in 2007. She was the first female theology professor in Guatemala.

As administrator of Salem Heights, Sister Judy Kroeger oversees day-to-day operations at the Congregation’s motherhouse and coordinated recent projects such as the renovation of living spaces and the dining facility. She has served in her current role since 2011, following ministry in a variety of roles including pastoral care, management of the Maria Stein Shrine and Retreat House, housing management and congregational leadership.

Sister Judy graduated from Regina High School in Norwood and earned a bachelor’s degree in secondary education from the University of Dayton, followed by a master’s in pastoral studies from Loyola University Chicago.

“More to life than this … Those were my thoughts more than 50 years ago, after graduating from high school, getting a job, buying a car, going out with my friends, etc., and so I pondered a call to be a Sister of the Precious Blood,” Sister Judy said. “In the words of St. Paul, my life has been blessed with more than I could have asked or imagined!”

Born in Fallbrook, California, Sister Mary Yarger joined the Precious Blood Congregation in 1967 and went on to a life of ministry in education — elementary, secondary, administration and external evaluation. She called the time she spent teaching at her former elementary school (Mission San Antonio de Pala Indian School) and high school (San Luis Rey Academy) “especially satisfying,” saying, “It was an honor to assist students who came after me in both schools. This was especially true at Pala because I taught kids and grandkids of students I went to school with in the same school!”

Today, Sister Mary serves as principal of Sherman Indian High School in Riverside, California, where she is the third generation of her family to be affiliated with the school.

“I am grateful to the Congregation for the blessings I have received as being a member. The friendships developed over many years have sustained me through the many events of these 50 years,” Sister Mary said. “Life is not meant to be easy; it is a gift of grace for each of us.”

With Precious Blood Sisters as teachers and Missionaries in the local parish, Sister Deb became familiar with Precious Blood Spirituality, which eventually led her, at the age of 42, to enter the Congregation. She discovered her love of ministering to the elderly and went on to serve in Maria Stein, the Maria Joseph Nursing and Rehabilitation Center, Twin Towers community and Salem Heights.

“Being part of this family has made me a better person, helped me to hear the word of God and respond to it,” Sister Deb said. “From every person I met along life’s journey, I’ve grown in love and trust in God.”

Sister Rita Manríquez-Silva writes: I was born in the city of Valparaíso, Chile, two years after the first five Sisters of the Congregation arrived in Chile by boat at the Port of Valparaíso. That’s why my thoughts have always been: “Mother Brunner [our foundress] came looking for me.”

For a long time I participated in different vocational meetings with other Congregations. When I met the CPPS Sisters, what attracted me most was the Spirituality of the Precious Blood and the charism of the redeeming love of Jesus.

During these 25 years of consecrated life, I have served in parishes in Santiago, used my gifts as a secretary in the Conference of Religious and worked for the Archdiocese of Santiago. I am currently participating in my home parish as a pastoral associate.

With a grateful heart I thank the Lord of Life for having called me to live in this Congregation under the Spirituality of the Precious Blood, which has filled my life with many divine graces.

Jubilarians 2018: Sisters of the Precious Blood