In other news a headline read: Prayer Foremost in Wapakoneta As Townsfolk Cheer Armstrong.

A luminous orange banner “Wapakoneta Says God Speed Neil,” on a bridge over Interstate 75 helped bring thousands of motorist during the past weeks to this Auglaize county community of 7,000 people, the hometown of the first man to step on the moon.

But the banner also reflected the spirit of the town of Neil A. Armstrong. Some have criticized what they believe was the absence of the religious dimension in reports of the great adventure to the moon and the Rev. Billy Graham chided President Nixon for saying that the moon landing was the greatest event since creation, neglecting to mention the Incarnation and Redemption.

There is no room for such criticism in Mr. Anthony’s town, where the Wapakoneta Daily News published the block letter appeal: “Say a prayer for Neil’s Safe Return.”

It was not until the safe recovery of the three Apollo 11 astronauts that Wapakoneta’s churches had thanksgiving services.

A Mass of Thanksgiving was held at St. Joseph and at all Masses were “on the glory of God” as manifested through man’s new look at another part of his creation, according to Father Clement Alt C.S.S.P. There were appropriate prayers and readings from the Scriptures from the story of creation to the Canticle of the Three Young Men, in which the Lord is praised for His wondrous works, the pastor said.

Did you know, Laurel Court by Gail Finke

Recording Elder’s History: Duwel and Langen Bring Their High School to the Community 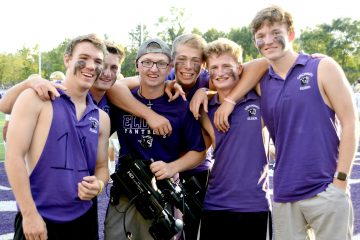