November 29: All Saints of the Seraphic Order (Feast)

Washington, D.C. Newsroom, Jun 16, 2020 / 01:10 pm MT (CNA).- Catholics have a whole host of saints to choose from in times of trouble or anguish. There’s St. Rita, patroness of the impossible, St. Dymphna, the patroness of anxiety, and when all else fails, there’s always the patron of lost causes himself, St. Jude.

But when the Schachle family of Dickson, Tennessee, needed a saint – and a miracle – they went a different route.

When Michelle Schachle found out that her 13th child not only had Down syndrome, but fetal hydrops–an uncommon, typically fatal condition where fluid builds up around the vital organs of an unborn child–she and her husband appealed to Fr. Michael McGivney, founder of the Knights of Columbus, for help.

The unborn Schachle was given “no hope” – the combination of fetal hydrops and Down syndrome meant that he had no chance of survival.

“The doctor that ran the neonatal high risk clinic at Vanderbilt University told us that she had been doing this for 30 years and she had never seen a child survive the diagnosis,” Daniel, the baby’s father, told CNA. Michelle had already had one stillborn child, and she was overcome with fear at the thought that would happen again.

Asking Fr. McGivney for his intercession was a no-brainer for the Schachle family. Daniel works for the Knights of Columbus and had previously been Grand Knight of his local council. The Schachles even dubbed their homeschool the “Fr. McGivney Academy.”

“We’ve worn out his prayer card over the years,” said Daniel. When it came time to invoke some spiritual help during a crisis, there was no question about what they would do next.

“We knew that (Fr. McGivney) looked out over our family, and we looked to him a lot and asked him to pray for us, anyways. So it was more of a natural, I would say, flow,” said Daniel. Michelle concurred, telling CNA that McGivney had answered prayers “many times” for their family.

When they prayed for their unborn baby, Fr. McGivney came through again – in a big way. With hundreds of people praying for McGivney’s intervention for her child, and following a quick pilgrimage to Fatima with the Knights of Columbus, Michelle’s next ultrasound showed no sign of fetal hydrops.

Her doctor that day, initially unaware that her patient was the woman she had heard about – the woman with the terminally ill baby – began to discuss what they would do when the baby was born. Michelle was confused by that development.

“And so I just looked at her and I said, ‘Doctor, I was told there was no hope’,” she told CNA. She said learning her son would likely survive his birth sent her into “a lot of shock” and that the rest of that day was a blur.

One thing Michelle clearly remembers, however, is being asked by her doctor what she would name her baby. Until that day, she and her husband had planned to name the baby Benedict, and had been referring to him as “Baby Ben.” But when she heard that her child had been healed, Michelle knew he had to be named Michael, in honor of McGivney.

“I just remember weeping and saying, ‘His name is Michael,’” said Michelle. “And we never called him Ben after that.”

On May 27, 2020, Pope Francis confirmed what the Schachles already knew: they had witnessed a miracle. After extensive medical examination, the unexplained healing of Michael was decreed a miracle that arose through the intercession of Fr. McGivney.

As a result of that miracle, McGivney will be beatified, and referred to as Bl. Michael McGivney.

The Schachles told CNA it had crossed their minds that their prayer could lead to the miracle needed to advance Fr. McGivney’s cause for canonization, but that was not their specific goal in asking for his intercession.

“I remember praying the whole, the entire trip (to Fatima), ‘let Michael be the miracle,’ but like in my heart of hearts, that meant he would live,” Michelle explained to CNA. “And I never thought beyond him living…I only wanted him to live.”

Daniel told CNA that he remembered thinking, “There’s gotta be a baby (who) survives this at some point. Why can’t it be ours?” along with “You know, Fr. McGivney needs a miracle. Why can’t it be Michael?”

Despite the miraculous healing from fetal hydrops, the rest of Michelle’s pregnancy did not go entirely according to plan. She delivered her son in an emergency cesarean section after just 31 weeks gestation. Michael weighed only 3 pounds 4 ounces, and spent the first 10 weeks and one day of his life in the hospital.

Even with Michael’s early arrival into the world, the hand of providence – and Fr. McGivney – was at work with the Schachle family.

Michael’s birthday, May 15, is the anniversary of the chartering of the first Knights of Columbus council. Michelle and McGivney have the same birthday. Both Michael and McGivney were born into families of 13 children – McGivney was the eldest, and Michael the youngest.

Michael was born with a heart defect commonly found in children with Down syndrome, and had heart surgery at just seven weeks old. He had another brush with death at six months old, when he came down with a respiratory illness that landed him in the hospital for six weeks.

But today, Michael is a happy and active five-year-old. He has no conditions related to his prematurity or fetal hydrops, and, by his family’s account, he’s thriving.

His parents told CNA that while their youngest “definitely knows he is special” and “knows that he is the king of the world,” he is not yet aware about the miraculous circumstances surrounding his birth. They say that Michael has strengthened their prayer lives, and has made a “big impression” on his doctors.

“There were times where (the doctors) were like, ‘We don’t know what’s going to happen and he’s going to make it or not,’” Michelle said to CNA. “And I’m like, ‘I don’t think you understand, God has big plans for this child.’”

“When God shows up like that, it changes everything,” she said. 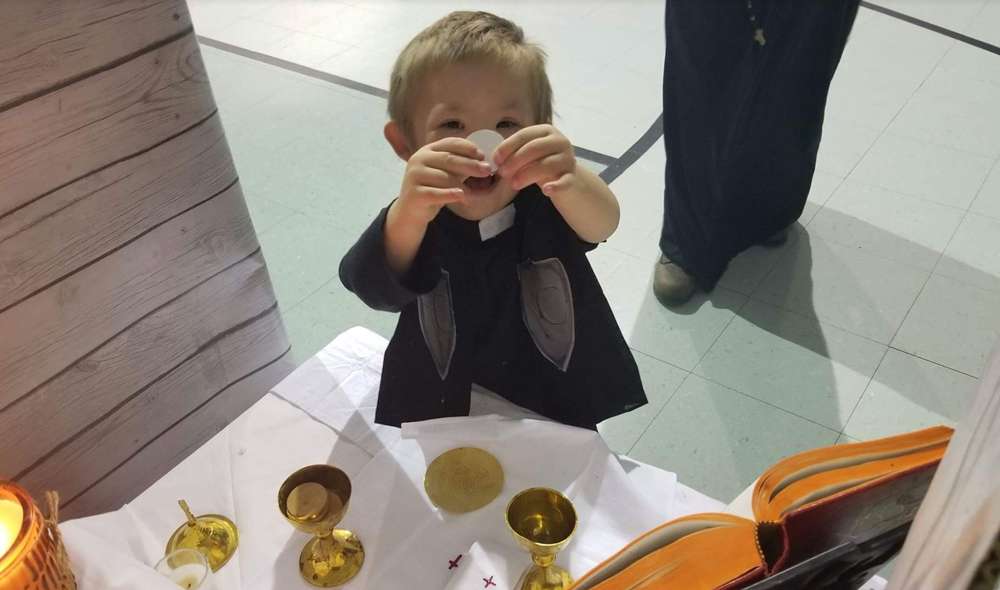