The village of Fryburg, a little more than five miles from the city of Wapakoneta, is reminiscent of the rural villages of the old country. Exiting Interstate 75 and passing by the town, you might think you just exited the Autobahn, but, really, you are in the Ohio heartland. A spired church draws you to the center of this tucked away town, beckoning you to answer the invitation the Lord gives in the first chapter of St. John’s Gospel to “come and see.”

One of the oldest structures in the Archdiocese of Cincinnati in continuous use, St. John the Evangelist Church, has been a part of the Archdiocese for more than 170 of its 200 years. Constructed in 1850, the church has been a place to encounter the Lord for generations of Catholics. The physical building is also Fryburg’s connection to its roots – the traditions and people who give meaning and flavor to small town life. Moreover, this parish is unique in the Archdiocese of Cincinnati by its treasures and history.

The majority of St. John parishioners were Bavarians who came to farm the land for a better life. In the late 1840s, the devoted people of Fryburg desired a parish of their own, as they tired of traveling the cumbersome roads to the Petersburg Church, which was a couple miles west of town. Trustees began planning for the parish by buying two lots in town and mobilizing the parish to donate a portion of the labor and materials. The bricks of the church were made in Fryburg by members of the fledgling congregation. However, these are hidden today by the stucco that covers the exterior walls of the Church.

The parish started small, with just 30 families, in 1850. However, the parish was able to operate a school, which became a parish hall in later years, and furnish a priest house for their pastor. Before the priest lived in town, they shared him with other local parishes. In 1870, the pastor could not get to Fryburg for a funeral due to harsh weather. The irate parishioners chose to bury the person without a priest present. This incident, known as “The Fryburg Rebellion,” led to St. John getting a resident pastor a few years later, as they had also doubled the number of families registered there in just 20 years.

Of the many pastors of St. John Church, one looms largely in the historical consciousness of the parish and village, Father Lawrence Tebbe. Born in nearby McCartyville, Father Tebbe was stationed at Fryburg in 1938, at the age of 36 until his death in 1972. Wanting to remain at a small parish for his health, he was never transferred. Because of this, he became a father figure to the people of the parish, presiding at the marriages of young people he had once baptized.

Father Tebbe was a notable painter, woodworker, and stone mason, drawing on skills he acquired in high school and college. He was known for his paintings, which were raffled off at the annual Fryburg Homecoming Festival, which continues today as a way of fundraising to keep up the parish. The paintings, which were never sold by Father Tebbe, are prized pearls of the community, passed on in families from one generation to the next.

Father Tebbe’s magnum opus was St. John Church, which he redecorated in 1949-50. Above the proscenium arch are the words of the first disciples called by the Lord, “Where Dwellest Thou” and the Lord’s response, “Come and see.” Thus, all are invited by Jesus to his tabernacle, residing in our midst. Father Tebbe also painted intricate designs around the statues, windows, and high altar that accentuate these features. There are a number of Christian symbols on the walls and a depiction of Mary above the back door that is also the work of the beloved pastor. On the walls near the ceiling of the nave, there are four angels with blonde hair believed to be based on four girls who made their First Communion in 1950. The embellished Pieta scene in the back was by Father Tebbe and is worth the trip to Fryburg on its own. At one time it also served as the baptismal font.

Father Tebbe built the rectory next door during his pastorate. It is a unique building, clearly the work of a skilled mason and pastor. The structure is part brick, part stone, part house and part Lourdes Grotto. Our Lady keeps watch over the front door from her upper niche in the chimney (Father Tebbe was especially adept at laying hearths). In the front lawn is a wooden crucifix. It was designed by Father Tebbe in the style of the wayside Bavarian shrines to remind locals not only of their heritage, but also of the sacrificial love of Jesus.

“Come and see.” This summons of Christ spurred on the generations of Catholics in Fryburg who followed the Lord at St. John Church. This parish is exceptional in its preservation of history and desire to radiate Christ to those living around it. In this bicentennial year of the Archdiocese of Cincinnati, come and see for yourself the rich faith we have inherited and the joy that comes in passing it to others. 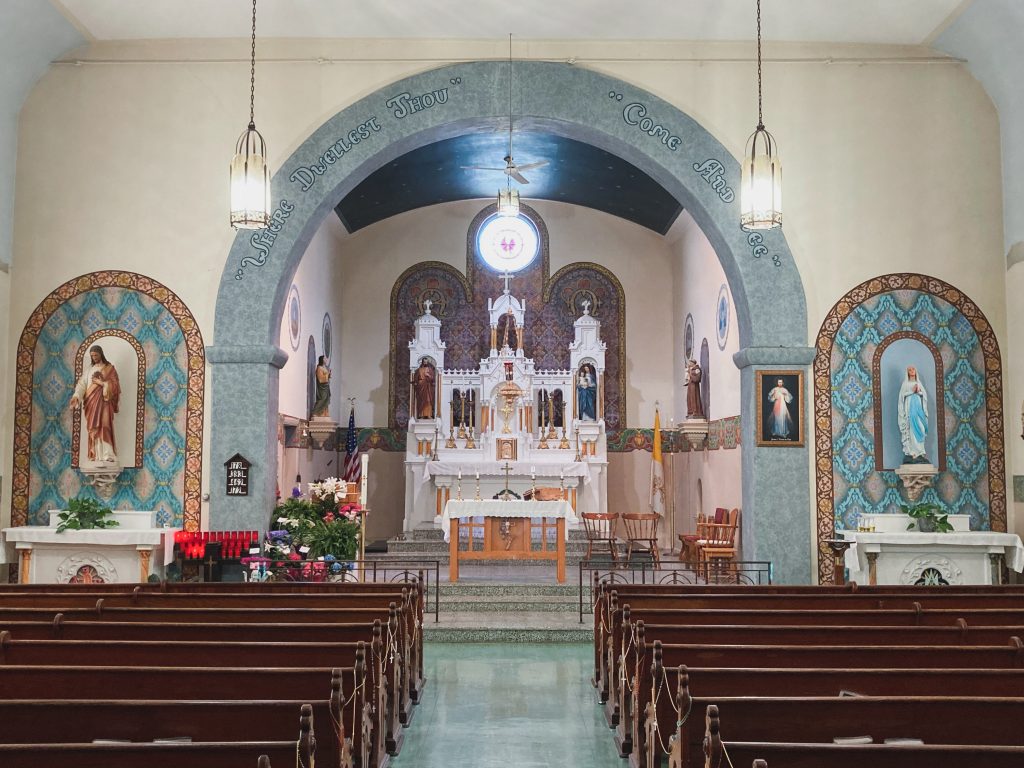 Archbishop Responds to Father Drew Being Placed on Leave of Absence (Updated August 29, 2019) 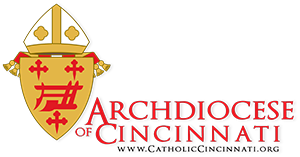