The Catholic Telegraph 2010-11-24
The Catholic Telegraph / November 24, 2010 / 1k
0
Shares
Facebook Twitter Pinterest WhatsApp
Nov. 26, 2010
By Kathy Schwartz
ST. FRANCIS DE SALES DEANERY — Of course photographer Robert A. Flischel wants you to get his “Messages of Glory” greeting cards.  Even more, he wants you to get them.
He hopes that when you order the cards, you appreciate not only the biblical tale depicted in the artwork, but also the history of the Greater Cincinnati buildings that house the art and the stories of the parishioners who acquired it.
“The cards are a way to engage the community,” said the photographer, a member of Guardian Angels Parish. “I want to be involved in a project that has historical, educational and spiritual impact.”
Nationwide, Catholic churches and schools are being shuttered, sold or torn down as parishes merge. Magnificent stained-glass windows, paintings, mosaics and other artworks are in danger of being lost. Flischel’s interest in preservation already has resulted in the books Cincinnati Illuminated: A Photographic Journal, The University of Cincinnati: Architectural Transformation — Tradition and Innovation and An Expression of the Community: Cincinnati Public Schools’ Legacy of Art and Architecture.

The cards preview Flischel’s book Messages of Glory: The Narrative of Roman Catholicism, scheduled for publication in the summer of 2011. The cards are initially being sold through Summit Country Day and St. Ursula Academy as school fundraisers. They are packaged in sets of 12 full color, five by seven inch greeting cards with verses written by Father Philip Seher, chaplain at Summit. Six images are used:
• Madonna and Child glass mosaic, St. Gregory the Great Chapel, Athenaeum of Ohio/Mount St. Mary’s Seminary, Mount Washington. Produced by Vatican studios, acquired in the early 1960s. Message: “May the Son of the Most High touch your heart and bring you into the work of His hands.”
• Madonna and Child plaster artwork, St. Ursula Academy, East Walnut Hills. Message: “He is the Son of the Most High…Holy…Wonder Worker…Prince of Peace.”
• Nativity scene, painting, Mother of God Church, Covington. Created by Johann Schmitt (1825-1898), teacher of artist Frank Duveneck. Message: “May the Mother of Your Lord, with the aid of angels on high, lead you to His light.”
• Nativity scene, painting of the Holy Family, Summit Country Day School, Hyde Park. Possibly by Sister Marie du Saint-Esprit (1865-1941). “May the Prince of Peace guide and inspire you to be his instrument of justice and peace.”
• Christ Child, nativity scene in stained glass, the Verdin Co. (formerly St. Paul Church), Over-the-Rhine. Likely created in the early 1900s. Message: “You will find an infant wrapped in swaddling clothes and lying in a manger” (Luke 2:12).
• St. Elizabeth of Hungary and Child, window, Vineyard Church (formerly St. Elizabeth Church), Norwood. Produced in the early 1900s by Zettler Studios, Munich, Germany. Message: “Inspired by Mary’s love, May you embrace the Lord of heaven and earth.”
The “Messages of Glory” project began in 1991. The inspiration came from television, explained Flischel, who is based in Mariemont.
He has been shooting since 1971, and his photos have appeared in Time, Life, National Geographic Traveler, the Smithsonian and Ohio Magazine. But by 1990, “I was a burned-out photographer,” he says. Exhausted, he fell asleep on a couch, and when he awoke, Ken Burns’ Civil War documentary was on PBS. Flischel found a new purpose.
“I thought, ‘If that guy can take old, dusty, scratched photos and create what I consider the greatest event on TV. …’ ”
As Flischel’s thought trails off, he removes a clipping of Babe Ruth from his computer.  In the text, Burns explains why he values a photo of the baseball giant over video. All that can be said about the video, according to Burns, is that Ruth is trotting the bases. But “a still photo is a canvas to which meaning can be added.” A viewer can pause and search the Babe’s face.
Flischel got what Burns was saying.
The book’s purpose is “to tell the story of faith visually,” said Flischel, noting that he was also inspired by the late Father Donald Tenoever, a professor of architecture and art history at St. Gregory’s Seminary.
He visited more than 80 churches in the city. Between 100 and 200 photos will appear in the book. (A YouTube preview puts the Ken Burns pan-and-scan effect to use, http://www.youtube.com/watch?v=TSvjiMk8es0.) A dove of peace icon that was created in the 1860s is as relevant as one from the 1960s, and vice versa.
“It’s not a catalog. I want to tell a story,” Flischel says, and remind today’s worshippers that these current and former churches and schools “were built by your neighbors” and ancestors.
Kim David, a Summit board member, is helping Flischel promote “Messages of Glory.” Together, they are “finding who else could get it,” she says.
The cards are significant, David says, because “others (besides those who buy the book) need to have access to these photos” and “share in the beauty and importance of saving this art.”
She heard the excitement at Summit after Flischel photographed a painting there of the Holy Family.  The condition of the art was “so dirty, people didn’t know what it was,” she says. Flischel’s keen eye will call attention to the need for preservation, she believes.
She sees another benefit, too: “I think this could drive people to see these works” in churches they wouldn’t otherwise visit.”
David said the card project could expand to other schools and later feature other images and messages,
Flischel feels fortunate to have visited so many parishes and seen so many works that are hidden in plain sight. The project has reinforced his religious faith.
“I’m a cradle Catholic,” explained Flischel who attended St. Cecilia School, St. Xavier High School and Xavier University, where he earned a degree in sociology. “Just being in the churches, which are such spiritual centers for me, I find myself more inclined toward prayer.”
He jokes that his bumper sticker should read: “I stop for spiritual refreshment.” He is particularly fond of the stained glass at St. Gertrude Church in Madeira. “I know I can find (meditation) there mid-week,” he said.
The project has also affirmed his faith in Cincinnati.
“I’ve found out about this community that if you tell your story enough, people will get it.” He wants his city to “realize you’ve got everything — and more!”
The cards are being sold for $14.95 per set, plus tax. Shipping is free. To order visit http://members.printable.com/arnoldprinting/messages_of_glory/. When ordering, please be sure to designate which school should benefit from your purchase.
Previous post

just one festival this weekend – taste of mission 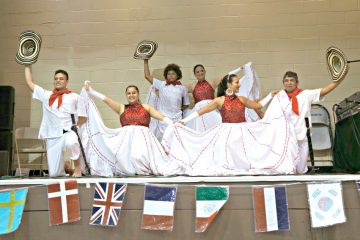