January 28, 2022
Home»Local News»Meet David Webb to be ordained in the Diocese of Tulsa
Local News/Vocations

Meet David Webb to be ordained in the Diocese of Tulsa 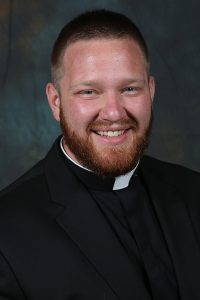 What led you to pursue the priesthood?
To be honest, it took me a while to get used to the idea of priesthood. But when I was in high school I was too stubborn to be open to what God wanted for me. The summer before my senior year of high school I decided to go to World Youth Day in Sydney, Australia, and it was there that I first met the pope, realized how awesome the universal dimension of our church is, and began to realize how happy anyone can be by just following their vocation.

What has the journey been like as you neared ordination?
It is hard to believe that I am nearly done after eight years of seminary. For the first few years it seemed so far away, and now that ordination is nearly here, it is hard to believe. For years, I’ve been working towards learning as much as I can to become a better priest for the people of God, and now I finally get to move to the next stage of my life, which is active ministry, and I couldn’t be more nervous, excited, and peaceful about where I am in my life.

Was there a single person who greatly influenced your decision to become a priest?
Father Brian O’Brien was the priest who was our chaplain on the World Youth Day trip and he was one of the first priests who really got me thinking about becoming a priest. Father Brian exuded a joy which flowed from his love for his vocation, and that really struck me and got me thinking, “will I be happier doing what I want or doing what God wants me to do?”

What message would you offer to those who want to serve God but do not know how?
In a single word: discern! At one point during my time in seminary, I began to doubt that I would be happier being a priest than another vocation. When I told my vocations director, I thought that he would be angry with me for wanting to quit, but instead he smiled and said, “David, if you are being called to be married or a religious brother, than we do not want you to be a priest of our diocese, and if you are called to be a priest of our diocese, than no honest wife will want you to be her husband nor a religious order want you to be a member of their community.” It was good for me to understand that there is nothing more fulfilling than doing what God created you to do, and although it can be hard to let go of our personal plans and dreams for our future, to begin to believe that God’s plans and dreams for me are greater than what I could ever plan for myself.

How has being a deacon influenced the type of priest that you will be?
Being a deacon has helped show me that I want to be a priest who knows the aspects of our faith that people struggle to understand and live, and to become an effective communicator of the faith to the modern world. There are many parts of our faith that are at odds with our current culture, including marriage, family, celibacy, contraception, cohabitation, divorce and remarriage, homosexuality, gender, and so on. Overall, I think that greatest problem, which is at the root of all these other issues, is the understanding of whom the human person really is. Who we are, who God created us to be, that is the root of understanding why the church teaches what she teaches.

What are some of your thoughts about beginning priestly life?
To become a good priest, I need to fully embrace laying down my life every day for others and to do everything I can to be that bridge bringing Christ into the lives of every person I meet. There are so many ways in which we build up walls which keep us from fully conforming our lives to Christ, and it is the life of the priest which should be poured out every day to do everything he can to help everyone be reconciled to Christ through the gifts of His sacraments, which He gives to us through the church.

What advice would you offer about discerning a vocation?
Discernment requires us to be open to going wherever God may call us, listening for what He calls us to through prayer and through other people, and the discernment is only finished when we make some definitive commitment. Discerning a vocation is not just about “what do you want to do,” rather, it is meant to be about becoming the person God created us to be and doing what God has called us to do in this life.

What will you miss most about your seminary preparation time? What will you value the most?
I believe that I will miss living with so many brothers. The community aspect of seminary has been incredibly formative for me, and having so many brothers to rely upon, who are true brothers in arms has truly changed me.

What types of non-church jobs have you had?
I worked as a front desk secretary at a small tax business during tax season. I worked as a groundskeeper at a golf ranch for a few summers. I also worked at a restaurant as a food runner.

What type of extracurricular activities did you enjoy in college? High school?
Singing in the choir at school and at church, competing in MathCounts and academic bowls, going to Youth Group and Dead Theologians Society.

Returning from Fatima, pope says he has doubts about Medjugorje

Ordination Week, looking back at the late 60's early 70's

Celebrating Ordination in the Archdiocese of Cincinnati

Meet David Webb to be ordained in the Diocese of Tulsa