The popular podcaster and YouTube star Father Mike Schmitz came well-prepared for his speech at the March for Life rally Friday.

“The first speech I ever gave in my entire life was in eighth grade. We got a chance to choose any topic, any argument, any position,” he told a large crowd assembled at the National Mall. “I chose to talk about the dignity of human life from natural conception to natural death and the evil of abortion and euthanasia.”

Born the year after the landmark Supreme Court abortion decision in Roe v. Wade, the gregarious 47-year-old priest of the Diocese of Duluth, Minnesota, is best known for his “Bible in a Year” podcast and his YouTube videos for Ascension, the Catholic multimedia publisher.

A headline speaker at the pre-march rally, Schmitz, a North Star State native accustomed to the frigid January weather, received a rousing, rock-star reception from the crowd, which included thousands of young marchers.

He used the occasion to stress the same message he originally shared with his classmates as a young adolescent: every human life matters. This time, the message was deeply personal.

Schmitz told the story of his maternal grandmother, Helen, a nurse who spoke out in defense of the unborn and the conscientious objections of her fellow nurses when the hospital where they worked decided to peform abortions in the wake of the Roe decision.

“Helen, she knew that people mattered. She knew that children mattered. She knew that her nurses mattered. And so she hated the fact that this hospital that had done such good in that part of the world was now about to do so much evil. And they were forcing her nurses to participate in abortions. They were forcing her nurses to carry the remains of these children to be disposed. And so she went to the board of directors and she said, ‘This needs to stop. Either you stop doing abortions or I’m leaving,’” Schmitz recalled.

The board refused, and his grandmother left her job as head nurse. That decision “almost destroyed her life”; she didn’t regret it, “but it broke her heart,” he said.

“And I think that’s why we’re here, too, right? I think we’re here because abortion, what it’s done is broken our hearts. And I know so many people here, you’re standing here because you know the dignity of human life. And so many people are among us because this story is part of your story, because you found yourself at one point in a place where it seemed like life was an impossible choice,” he said.

“And so I know that we’re surrounded by men and women who have chosen abortion. Listen, you need to know you’re supposed to be here. You matter, you belong here. No matter what your past is, you are still loved. You need to know this. You are still loved and you still matter.” You can watch Schmitz’s full speech in the EWTN video below.

Struggling to maintain his composure at times, Schmidt went on to share a recent conversation he had with a woman he helped persuade not to abort her child 12 years ago.

“That young woman, 12 years ago, she gave her son to a couple who adopted him and have loved him. And he’s blessed their life. And they’ve blessed his life. I’ve met him. He’s an incredible young man,” Schmitz said.

He said the woman urged him ahead of his speech to remind people “that regardless of your choices, you are still loved and you still matter.”

Highlights of EWTN Broadcast Schedule Week of May 8

The 2018 Irish Memorial Mass will be March 11th at St. Peter in Chains Cathedral 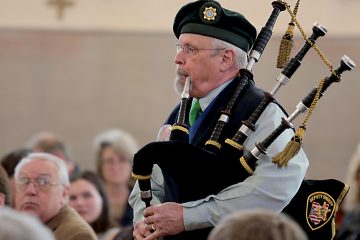