Sellers spoke with EWTN News In Depth on Friday, ahead of Memorial Day, about his extraordinary faith journey. Now in his fifties, he is studying to become a priest in California after encountering military chaplains during his time serving in the U.S. Army. EWTN Vatican correspondent Colm Flynn interviewed the seminarian during a special episode dedicated to the bravery and sacrifice of U.S. service members.

“Chaplains are a lot like medics,” said Cameron. “We don’t really know what they do, they’re mysterious. But when you really need one, you’re just so glad they’re there.”

Following the Korean War, South Korea was one of the poorest countries in the world, Flynn reported. As a result, many mothers abandoned their babies, including Cameron’s own mother. Born in 1968, he was left in an alley at just three years old.

“I don’t know how I was found, but I ended up in the hospital,” he remembered. Then a doctor at an adoption agency noticed him.

The doctor “thought I would not survive if I went back into the foster-care system,” he said. “So she put me up for overseas adoption.”

While Sellers was originally flagged for adoption in Europe, an American couple felt called to adopt him.

“I don’t think they can really explain it in words other than just by emotion in the heart that I was the one,” he said. “And I was going to be a part of the Sellers family.”

The Sellers family was a Baptist family living in Phoenix, Arizona.

“I knew, no doubt, that I was a believer, but I just hated church,” Cameron remembered. “And I thought this was just something I was going to live with for the rest of my life.”

However, he was introduced to Catholicism and the Mass when he became friends with a Catholic in high school. Sellers said he initially struggled with Catholic teaching.

God had a plan, he added. “I think He wanted me there because He wanted me to know that I was in a family and that I didn’t need to worry about my background and who I was – that my family was the Catholic Church, the universal Church,” Cameron said.

After graduating college, Cameron joined the Army and served in Bosnia, Afghanistan, and Iraq. He worked his way up to the rank of colonel. Later on, he led an Army Reserve engagement team, where he helped reserves acclimate to South Korea.

During his time in the military, Cameron relied on Catholic chaplains when things got tough.

“The music, the sermon, just brought tears to my eyes because it brought so much comfort,” he stressed. “In those moments like that, you just know how important they are.”

Today, Sellers resides in California and is studying for the priesthood with the Archdiocese of San Francisco.

“The two things that really brought it to me was – one is, is that, ‘Could you die for your parish?’ And the answer was ‘yes,’” he said. “And then the second is, ‘Did I believe in the sacraments?’”

The answer to that question was also “yes,” he said. “I saw in my own life how the sacraments really healed me, that I wanted that ability too,” he emphasized.

“That’s what I see chaplains – I see what the sacraments are about, and why the Catholic Church is so vitally important,” he concluded, “is because they give us the tools to strengthen ourselves with God.” 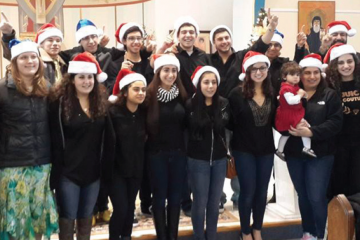