Eighty-seven-year-old Father John Bok was a physics teacher earlier in his life, but he just can’t wrap his head around the physics of how another car hurdled his own on his way to celebrate Sunday Mass in October.

“It’s a miracle,” the Franciscan priest told CNA Tuesday of the near-death experience.

Now retired — although he considers himself “semi” retired — Bok still helps to serve Mass at St. Andrew Catholic Church in Milford, Ohio. On Oct. 2, he was on his way to celebrate 9 a.m. Mass on the feast of the Guardian Angels.

It was about 8:40 a.m. when Bok was nearing the church. That’s when something went wrong with another driver.

A young man driving another vehicle on a road near Bok had a seizure while behind the wheel and passed out, Bok said. The young man’s car went off-road and was on course to ram its front into Bok’s driver-side door.

All that was standing between the two cars were a road sign and another vertical object sticking out of the ground, a video of the event shows.

The video shows the SUV ramming the obstacles head-on. Then, like a scene from a “Fast & Furious” movie, the SUV goes airborne over Bok’s car without touching it, landing on all four wheels.

Bok, and his vehicle, escaped unscathed.

Bok told CNA that one of the amazing things about the event is that he didn’t even know that his car was hurdled until hours after it happened.

“I did not know that that car went over top of me because I was looking ahead and it was to my left and above. And out of the corner of my eye I sensed something went by, but I just thought it was a bird or something like that,” he said.

Bok said that he has blindness in his left eye and wears hearing aids as well.

Bok said that a police officer who knows him approached him while Bok was at a restaurant after Mass and notified him that he was almost hit by the young man’s car. The police officer showed Bok a video of the event that was caught on camera by the funeral home across the street from where the incident occurred. You can watch the video below.

“I was in amazement that it had happened,” Bok said. He said that the police officer updated him that the young man was OK after being admitted to the hospital.

Bok was amazed that no one was killed or hurt. He said he has reflected on the event and knows that God had his hand in it.

“One of the mysteries is that it would happen to be that Oct. 2 feast (of the Guardian Angels,” he said, adding, “I don’t know what God was thinking.”

Bok said that if he got hit and his life was over, it would be a “win-win” situation because “heaven is going to be better than here.”

But, he said, he enjoys life and hopes God gives him more years.

“I’m happy I’m still here and it’s a mystery why I am when you look at that darn video,” he said. 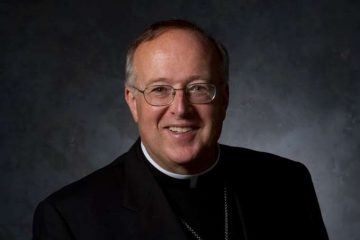